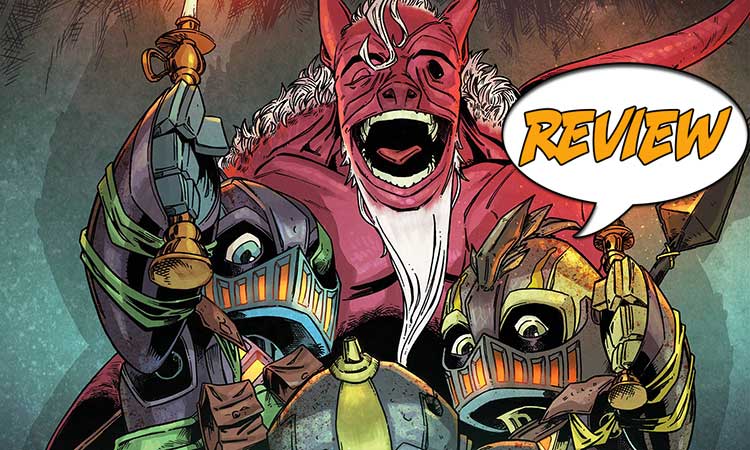 After their adventure in the City of Giants, Canto and his friends meet a mysterious stranger guarding a bridge they must cross. The toll is a single story new to him. Will they be able to pay? Find out in Canto #1 (Tales of the Unnamed World) from IDW Publishing!

CANTO: TALES OF THE UNNAMED WORLD #1

Previously in Canto: Canto saved his people from the Shrouded Man once, but that is not enough. The Shrouded Man’s influence covers much of the world. The only way to defeat him is by working together, and forging an alliance with their former enslavers. However, before embarking on that quest, Canto had to travel back home to New Arcana.

THE STORIES WITHIN THE STORY

Canto #1 (Tales of the Unnamed World) is an interlude that occurs after Canto’s adventure in the City of Giants. As he, Falco, and Rikta, along with their Malorex,  travel back home to New Arcana, they come to a bridge none of them remember crossing before. It extends out into the foggy distance, where they see a figure approaching. It is a person in motley who introduces himself as the Bard. He tells them that he has traveled through the Unnamed World so much and lived so long that he has heard all the stories that there are. To cross the bridge, one of them must tell him a story he has never heard before.

Rikta impulsively attacks, to no avail, and then tells a story. There was a village of Fairies who lived by the sea, Fairies whose wings had been replaced by clockwork. Despite this, they were happy and prosperous. The one dark spot in their lives was that they had never seen a sunset. As the sun sank, a large and noisy creature rose out of the sea, obstructing the sky and terrifying them. One day, Jacopo and Kalina decided to fly above the clouds, high enough to see the sun. Instead, the monster grabbed them. Kalina asked it to spare their lives. It thought there was nothing small Fairies could do for it, but she saw it was wrapped in chains. With their small, but metal, wings, they could cut through its chains, and finally, after a thousand years, it was free. It had never imagined the small creatures could help him.

But the tale of a small being helping out a larger one is an old, familiar classic to the Bard. Falco chooses to tell a story he had heard from Aulaura about her own past. Aulaura lived in a village near a rare Dragon Tree, an immensely huge tree where Dragons live, and indeed, one made its home there. Poachers and bandits liked to try to harvest these trees and the Dragons, and Aulaura decided to become the tree’s protector. One day, a particularly insistent bandit led her in a chase up to the top of the tree where the Dragon roosted. The bandit killed the Dragon, but that was not the prize he sought – it had an egg! When Aulaura attacked him to stop him from taking it, he struck it with his weapon and it fell from the tree. Aulaura reached the ground, fearful that she would find two dead Dragons. Instead, out of the egg hatched the little Dragon she named Zixia. I loved this story, but the Bard had heard that one before, years ago.

And then it is Canto’s turn…

A WORLD RICH WITH HISTORY

At its heart, Canto #1 is already a folkloric story, but this interlude dives deep into folkloric elements. The Bard desires a story he has never heard before; ironically, he is in a classic story. He has a wonderful character design. While he is humanoid, he is not human. His eyes have vertically slit pupils like a cat. His grin is broad and toothy, and his ears have pointed tips. Motley is the only way to describe his clothes, garments that appear to be patched out of pieces of different colors. He carries books, scrolls, lanterns, and an instrument. It is difficult to tell whether he is sinister, or merely bored.

I like that this book uses separate teams of artists and colorists for the main throughline and each of the different stories. It adds to the flavor, making it feel like they’re being told by a different narrator. I enjoy the way it seems that we’re exploring other parts of the world, perhaps even in earlier times.

Canto #1 (Tales of the Unnamed World) breaks away from the main storyline and lets us experience the world in a quieter time. Since one of the main themes is stories, this is a fitting way to do some additional exploration.

Canto: Tales of the Unnamed World #1

Between stages of Canto’s quest, he and his friends meet a mysterious stranger on a bridge.