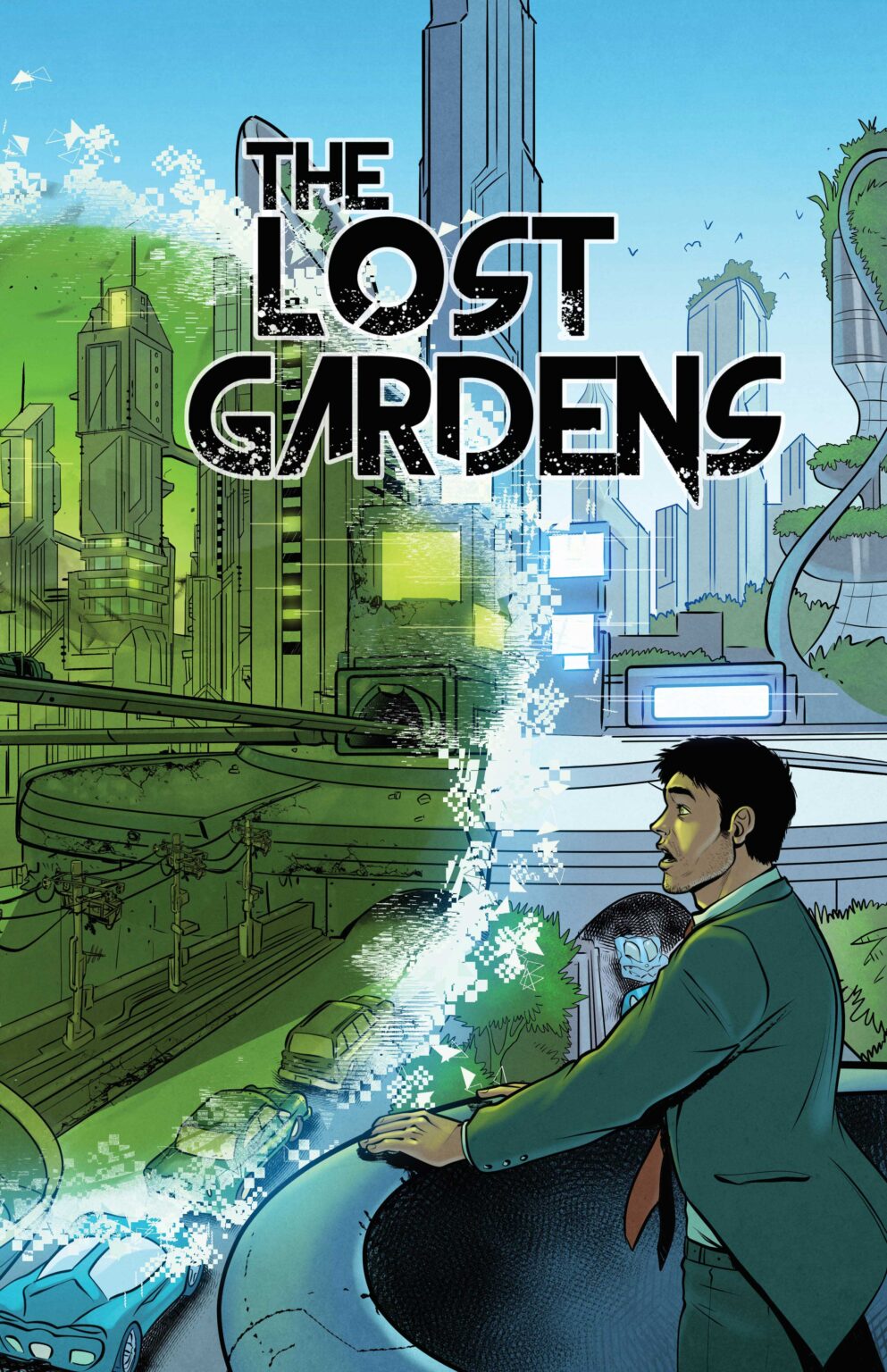 Have you ever looked around you and asked for something real? Just one thing? From Rabbit Hole Studios, The Lost Gardens, an all-new sci-fi adventure from Canadian writer James Babineau with art by Caius Schereiner (Elsewhere) and colors by Michael Woods (Sentinel Juggernauts, The Promise), is an illuminating and brilliantly constructed comic series readers won’t want to miss!

Shawn Myers discovered the dark truth about this world. When his augmented reality implants begin to fail, the true world around him is revealed. A world not plastered with the latest upgrades or newest fads, but actually crumbling concrete and angry people left in the dust of progress. Shawn will get more than he bargained for and find himself in a new world outside the technological utopia of Hub City.

Set in a world that indulges in a false luxury brought to you by the Etheon Corporation. Shawns life begins to unravel as his own technology implants turn defective, spiraling him downward economically, and by a supernatural entity calling itself Fear. Running from his crumbling life, Shawn finds a long forgotten society abandoned by Etheon long ago, and a new beginning. Lying to keep his origins safe, Shawn gets thrust into an adventure searching for a relic from an ancient text. Will Shawn be able to rise to the occasion or will the entity called fear consume and use Shawn for its nefarious means?

“With The Lost Gardens series we want readers to question the direction of our society—how fear is used daily to manipulate us towards the goals of the powers that be,” said Rabbit Hole Studios Publisher, Scott Humes. “To question our ever growing reliance on technology and what that could mean for us. We want to challenge readers to pursue truth, and accept the challenges and adversity that come with it. We want to personify fear itself in this series in ways we can all relate to, how it can change and be unpredictable, how it uses insecurities to drive us towards darkness, how it can put on a veil of friendship to dig its claws into us.”

“Rabbit Hole Studios has brought together a fantastic creative team to bring this project to life,” said writer, James Babineau. “Without the work of everyone involved, we would not be where we are now with The Lost Gardens. This journey started with a message out of the blue and I jumped onboard. After many conversations of world building and character development, I believe we have an amazing journey about to unfold. A world of inter-mingling genres brought together by Shawn Myers’ yearning for something real. He finds reality and with it all of the trials and tribulations of finding what you really are. When you are pushed to the limits of endurance your true self is revealed. That’s what The Lost Gardens is all about. An action-packed adventure thriller that will be sure to bring out the best and worst in the characters the story follows.

“The Lost Gardens is an amazing tale that explores human psychology in a world of overwhelming technology and cold interactions,” said Caius Schereiner. “When I was first approached by Scott to Illustrate this story written by James Babineau, I couldn’t imagine how complex and deep it would get. Shawn is not a usual protagonist, very confident and skilled, he’s just a common guy who´s struggling in his world, much like many people can find themselves. It was awesome to be a part of this project bringing this story to life. I loved to be able to work on the contrast that this world technology has while placing a relatable character in the center. Hope the story and the world get bigger and bigger reaching as many people as possible!”

The Lost Gardens #1 hits shelves Sept. 7. Cover Artist Debora Lancianese, letters by John Hunt. For more information follow Rabbit Hole Studios on their journey down the rabbit hole at: http://rabbitholestudios.ca/, or on Facebook, Twitter, and Instagram.