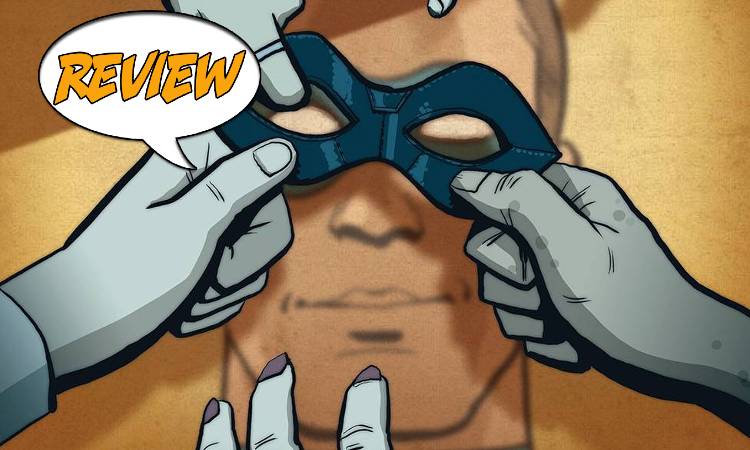 Comic book adaptations are huge business on TV and the big screen. But what about the creators who made the source material? Your Major Spoilers review of Public Domain #1 from Image Comics awaits! Previously in Public Domain: Syd Dallas is responsible for pop culture’s greatest hero: THE DOMAIN! But his sons Miles and David have a complicated relationship with both the creation and their creator. Can they convince their dad to fight for their family’s legacy?

“SOME KIND OF NERD PURITY TEST”

Our story opens with Miles Dallas visiting his parents, only to find his dad preparing to go to the big red-carpet premiere of a new movie featuring his creation, The Domain. Miles is mostly embarrassed by his dad’s connection to the superhero property, especially since, as the artist, Syd is always overshadowed by high profile writer Jerry Jasper. Miles is even more unhappy when his editor at the newspaper, who assigns him a puff piece about the new epic, Eminent Domain. So unhappy is he, in fact, that he picks a fight with the actor he’s supposed to interview, ending up in jail where his idiot brother, David, has to pick him up. The big premiere allows Syd to connect with Jerry’s personal assistant, who admires his work and wants to create comics of her own, leading to the big final page reveal.

I expect that a lot of writers are going to try and figure out who Syd and Jerry are supposed to represent, but the story works so much better when you don’t try to assume anything. Zdarsky’s story isn’t about Siegel and Shuster, Lee and Kirby, Lee and Ditko, Lee and… Okay, maybe Jerry Jaspers has a pretty obvious model, but even that is reductive. This comic is more about the real secrets of the comic book industry, with Syd getting ignored on the red carpet, the company insisting that Singular Comics, not any writer, artist, or entity, is the creator of The Domain. Heck, even the character’s name is an in-joke about the characters being adapted and treated as properties, rather than anything resembling actual art. Speaking of art, Chip’s is wonderful throughout the issue, especially in the mundane details (like Dave’s ridiculous van or the mess of comic books and ephemera that fill Syd’s basement) and the facial expressions. I especially like how, even though there are parallels to previous work by this creator, the characters aren’t just like those from other books.

All in all, I am genuinely surprised how much I enjoyed Public Domain #1, as Zdarsky imbues every character with their own life and personality, with art that successfully conveys its real-world setting and tons of interesting story bits to give it all real-life resonance, earning 5 out of 5 stars overall. Now that Syd Dallas owns (or, at least, SEEMS to own) his character again, I hope that coming issues can keep up this level of quality and detail. You really should check this comic out.

It's clearly a story that the creator cares deeply about, and it comes through in every page of the work. This one comes highly recommended.