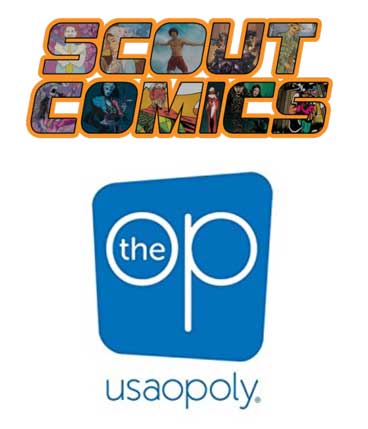 Scout Comics & Entertainment, one of the leading independent comic publishers with bestselling titles like Stabbity Bunny, White Ash, Eternus, and Unikorn, has partnered with Usaopoly® (The Op), the board game and puzzle publisher behind the best-selling party games Telestrations® and Blank Slate™.

Under this unique partnership, The Op will have a first look at all Scout properties for development into board games.

“Gaming and comics have always had a special relationship, and we look forward to expanding Scout’s IP into new territory with our incredible new partners at The Op,” said Don Handfield in a statement.  Handfield, the Chief Creative Officer at Scout, brokered the deal with Maggie Matthews, SVP of Licensing at The Op.

Scout Comics is based in Fort Myers, Florida and also has offices in New York and Los Angeles. They have over 275 titles in their comic catalog and have set up projects at Amazon Studios, Disney, Rooster Teeth, and FilmNation, among others. They recently launched a toy division called TRACKER, headed by action figure impresario Killler Bootlegs. They have several imprints including Chispa, a Latinx label; and Scoot!, their all-ages division.