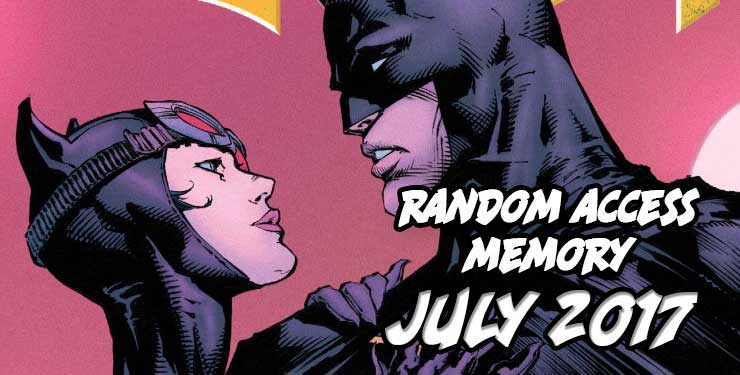 Rand Bellavia takes a look at his growing longbox, and reflects on comics released in June 2017.

Batman 24: Every Epilogue is a Prelude You will believe that Batman and Gotham Girl can have a conversation! Some thought Tom King’s Batman was too talky, but I prefer the more talky parts.  The man knows his characters and he has a lot to say about who Batman is and how he got that way.  This is because he paid attention to the Batman stories that came before him:

This idea comes from the rightfully lauded animated feature Mask of the Phantasm, which observed (through Alfred) that while Bruce says he became Batman to honor his parents, it’s pretty obvious that the no parent wants their child to risk their life on a nightly basis (and certainly not while dressed as a winged rodent). Batman seems to be a lot more honest and forthright than he typically is. This seemingly comes from Grant Morrison’s Arkham Asylum, where Bruce tells Commissioner Gordon (while dressed as Batman) that “Batman’s not afraid of anything,” but “It’s me, I’m afraid.” She is repeating the words Batman spoke to her and her brother when they were children — the words that inspired them to become superheroes in the first place.

This comic is essentially two scenes.  Interspersed between pages of the Batman and Gotham Girl (illustrated by Clay Mann) there are pages featuring Catwoman (illustrated by David Finch).  The Bat and The Cat come together for the final scene (illustrated by Finch). And we learn what Batman has really been afraid of this whole time. You don’t need to see the final splash page of Bruce proposing to Selina, don’t you? This is a story about two very different people.  First we meet Case: Case is a gangster who been asked to kill his childhood best friend.

Then we meet Juniper: Juniper is a housewife and a step-mom who appears to be living in a 1960s sitcom.  But it’s even less funny. Yes, her husband is bringing his boss home for dinner.

Did I mention that it’s not very funny? Both of their days go from bad to worse. You spend most of the issue wondering how these characters know each other.  The short answer is that they don’t.  But at the end of the issue they do a Freaky Friday. No matter what your thoughts about this type of story might be, let me assure you that where it goes from here is compelling.  It’s great to watch a hitman navigate an abusive suburban marriage, and to watch a housewife deal with a botched hit, but the real joy of this story is how Gail Simone uses the overdone body-swapping trope to explore how it would really feel to occupy another body, and ultimately tell a very trans-positive story. The last issue of Mark Russell’s satirical socio-political exploration of the Modern Stone Age Family includes the Great Gazoo’s final report on the humans of earth: We also revisit the science vs. religion argument. Professor Sargon outlines the primary difference between science and religion, and gives a pretty good (and sadly needed) definition of science. Pebbles discusses her doubt with Reverend Tom, who is as forthright as Professor Sargon. In his final book (Rocks of Ages), paleontologist Stephen Jay Gould introduces the concept of NOMA (non-overlapping magisteria), which is essentially the notion that science and religion aren’t really in conflict with one another.  He posits that they would get along much better if each area kept to what they do best: science should have exclusive domain over “the factual character of the natural world” and “develop theories that coordinate and explain these facts,” and religion should operate in the realm of “human purposes, meanings, and values.”  It would seems that Mark Russell (or at least Reverend Tom and Professor Sargon) have some sympathy with this idea.  And Gould’s appearance on an episode of The Simpsons would imply that he would have approved of this idea finding its way into The Flintstones.

We end as we should, with everyone getting to wave goodbye, and the Great Gazoo getting the final word. Other Comics I Read from June 2017