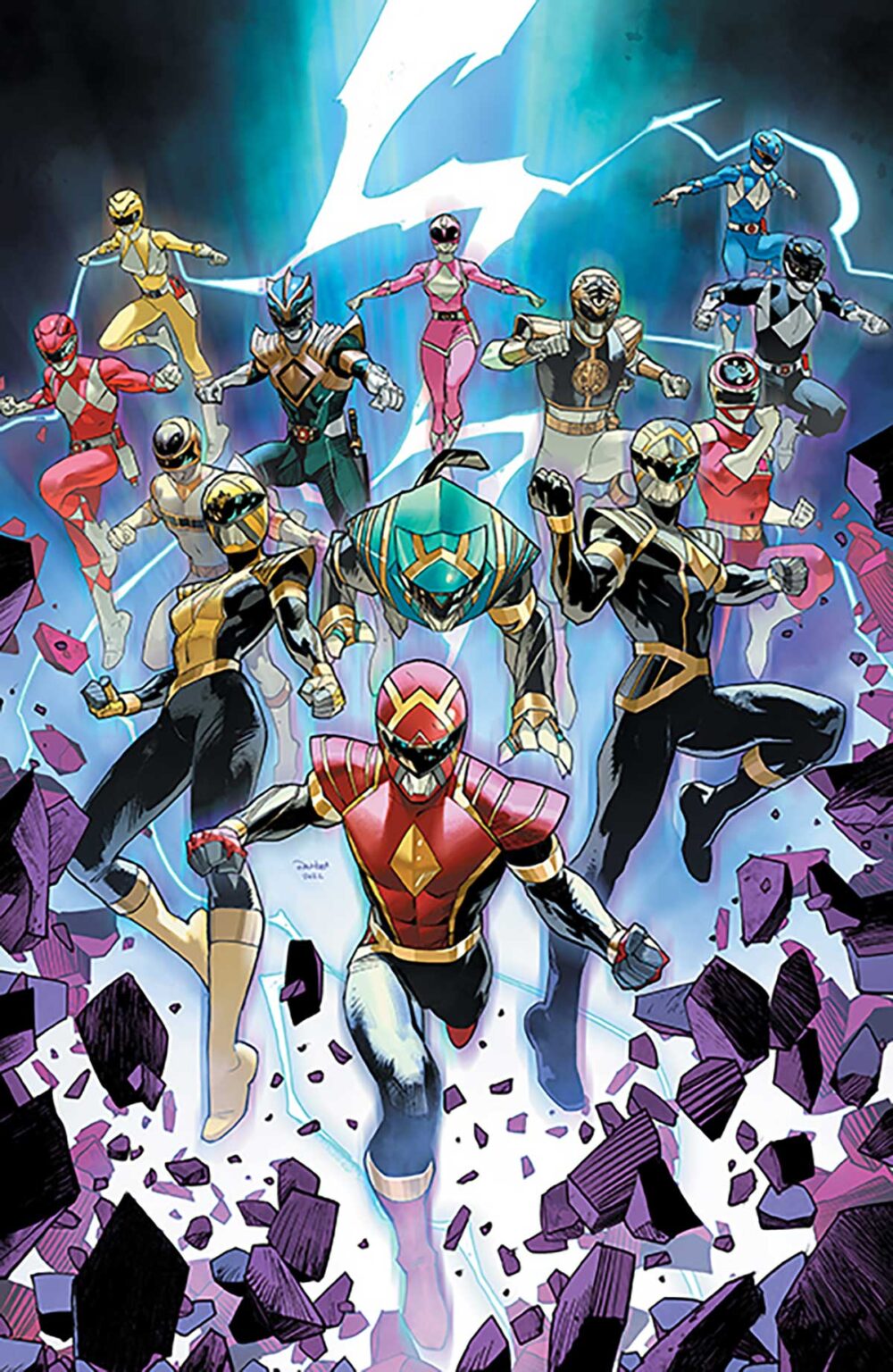 Mighty Morphin Vol. 5 SC
*****ADVANCE SOLICITED FOR NOVEMBER 2022*****
Retail Price: $16.99 US
Writer: Mat Groom
Artist: Moisés Hidalgo
Cover Artist: InHyuk Lee
Synopsis:
The dust is finally settling on the Eltarian War… but the battle is far from over!
With their very connection to the Morphin Grid at stake, the Rangers must embark on a desperate mission to the Lion Empire, or risk losing their powers forever!
But to do so, they’ll have to leave behind one of their own, who is soon faced with a deadly threat of their own…
Rising star Mat Groom (Ultraman, Inferno Girl Red) and fan favorite artist Moisés Hidalgo (Dark Blood) take control of the Command Center to usher in the next pulse-pounding Mighty Morphin saga!
Collects Mighty Morphin #17-20. Buffy ’97 SC
*****ADVANCE SOLICITED FOR NOVEMBER 2022*****
Retail Price: $14.99 US
Writer: Jeremy Lambert, Casey Gilly, Danny Lore, Lilah Sturgess
Artist: Marianna Ignazzi, Bayleigh Underwood, Claire Roe Cover Artist: Jenny Frison
Synopsis:
While it’s a flashback to the 90s, this isn’t any old rerun…
Buffy and Willow are trapped in a retro reality, can they find their way out of the demonic labyrinth of
clothes, soft drinks, ads, and makeup, and discover the evil that put them there?
And for long-time Buffy fans to sink their fangs into—a selection of classic Buffy comics from the 90s!
Collects the Buffy ‘97 one-shot as well as stories previously published in the Buffy 25th Anniversary Special, along with a curated selection of classic bonus material! Something is Killing the Children Slaughter Pack #4
Writer: James Tynion IV
Artist: Werther Dell’Edera
Cover Artist: Lee Garbett
Synopsis:
While Archer’s Peak sent Erica to hell and back, her long-awaited origins at the House of Slaughter are something terrible to behold.
Contains Something is Killing the Children #16-20 by Eisner Award-winning writer James Tynion IV ( The Department of Truth, The Nice House On The Lake) and artist Werther Dell’Edera that first introduced Erica Slaughter and the Order of St. George to the world.
Each issue features a brand new, exclusive cover by Eisner Award-nominated artist Lee Garbett (Captain Marvel, Shadecraft) on premium card stock. omething is Killing the Children Scarlet Bandana
Retail Price: $19.99
Synopsis:
Collect the next mask in the series!
The mysterious Scarlet Masks are the secret lorekeepers of the Order of St. George.
Join the House of Slaughter with this comics-accurate, cosplay-ready bandana, made from premium, high quality materials! Grim #5
Retail Price: $3.99
Writer: Stephanie Phillips
Artist: Flaviano
Cover Artist:
Main Cover: Flaviano
Foil Cover: Flaviano
Reaper Cover: Jenny Frison
Incentive Cover (1:10): Frany
Reaper Incentive Cover (1:25): Jenny Frison
Unlockable Cover (1 copy): Jenny Frison
Synopsis:
The truth behind Jessica Harrow’s mysterious death, and her connection to the Grim Reaper is finally revealed!
But how does this connect to her unique abilities, and the ancient force known only as… THE END?
The epic first arc of the breakout hit of 2022 concludes here, revealing macabre secrets and what lies ahead for the future of the series! Once & Future #29
Retail Price: $3.99
Writer: Kieron Gillen
Artist: Dan Mora
Cover Artist:
Main Cover: Dan Mora
Incentive Cover (1:10): Dan Mora
Incentive Cover (1:25): Nick Robles
Synopsis:
Kieron Gillen and Dan Mora’s bestselling fantasy epic is nearly complete, and it’s all been building to this!
In the penultimate issue, Mary and Bridgette will need all of the help they can get to defeat Arthur’s greatest weapon…
And with all of the remaining contenders vying for ultimate power, there’s just no way of telling who will come out victorious! Magic #18
Retail Price: $4.99
Writer: Jed MacKay
Artist: Ig Guara
Cover Artist:
Main Cover: Miguel Mercado
Secret Planeswalker Cover: Frany
Incentive Cover (1:10): Junggeun Yoon
Synopsis:
Tezzeret knows he’s been betrayed… and he’s set his bloodhound, Tibalt, on the traitor’s trail.
Now Garruk, Chandra, and Niko are all that stand between Davriel Cane and a gruesome death at Tibalt’s hands.
But the appearance of a guest Planeswalker might just give our heroes exactly what they need to find their way back to Ravnica, and save Vraska, Kaya, and Ral! Faithless III SC
*****ADVANCE SOLICITED FOR NOVEMBER 2022*****
Retail Price: $17.99
Writer: Brian Azzarello
Artist: Maria Llovet
Cover Artist: Maria Llovet
Synopsis:
Faith’s descent isn’t always pretty… but it is sexy as hell!
After Faith’s paintings take the art world by storm, she vanishes as quickly as she comes, leaving tongues wagging.
Is her disappearance a wild publicity stunt, a cry for help from an uninitiated artist, or something altogether too sinister to fathom? With Louis Thorne behind her catastrophic rise to stardom… who’s really to say?
Collects Faithless III #1-6. Pez tries to cool her heels after causing utter chaos with her pranks, when she finds an unexpected adventuring partner from a nearby stronghold of rival forest dwellers.
But there’s an evil mist growing on the horizon, one that the Wise Woman has fought against for many, many years…