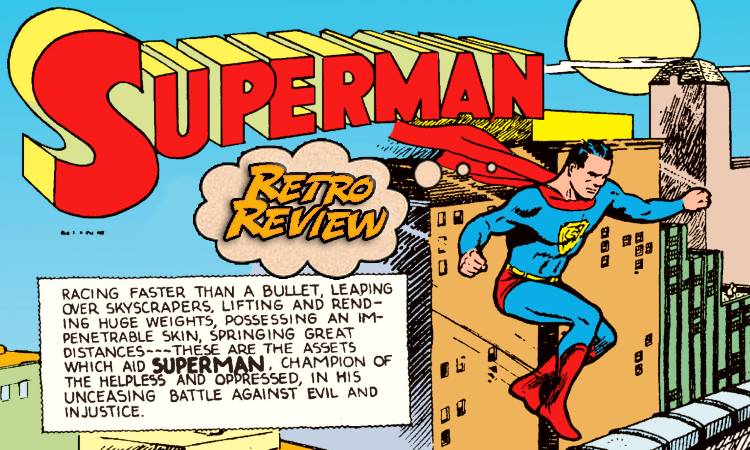 The Golden Age of Comics is full of issues that feature firsts, but sometimes one is lucky enough to get TWO firsts in one place! Your Major Spoilers Retro Review of Action Comics #11 awaits!

Previously in Action Comics: The 1938 introduction of Superman was an immediate success for Detective Comics, Inc. The first issue, meant to be a one-shot, was quickly made an ongoing series, setting the expectation that a comic book could be ALL about one character, rather than a rotating cast. In January of 1939, The Man of Tomorrow got his own daily comic strip, the workload of which caused artist Joe Shuster to hire backup. The official line was that Paul Cassidy’s job was to do inking and detail work, which relatively quickly turned into ghosting for Shuster. This issue is the first where Cassidy is clearly penciling AND inking the story, opening with a suicide(!!). Finding the timeline of events is somewhat hinky, Clark Kent gets involved both as reporter and as vigilante, discovering that the sellers may have known they were selling the proverbial pig-in-a-poke. Going undercover, he empties his own savings account to buy ALL the shares, thereby keeping the potential scammers from claiming another life. Traveling by night to the oilfield, Superman serves as one-man drilling crew, working all night to find out whether the land is a Clampett’s dream or not, finally giving up at dawn. Resigned to have gone broke for the right reasons, a grim Kryptonian heads for home. The crooked Messrs. Meek and Bronson realize that, if they can get the shares back from all their victims, they’ll be even richer, but all they find is the trail of the mysterious “Mr. Ramsey,” Superman’s alias. As someone who reads a lot of Golden Age books, I’m really impressed with how detailed and well-rendered Cassidy’s work is. (He also has a wonderful balance to his work, reflected in the fact that he is credited with adding the S-shield to Superman’s cape, making the character visually distinctive even from a reverse angle.) Realizing that “Ramsey” may have outmaneuvered them, the duo visit some old business associates, the very men who killed their investor in the first place! And there, in that fourth panel, with no fanfare, comes the first big debut of Action #11: It’s the first mention of Superman’s “x-ray eyesight,” one of the defining powers of the Kryptonian’s life going forward. It’s not shown, certainly not with the cutaway effect that would eventually become the standard, but it’s an important development in Superman’s power set. The previous issue features the first depiction of Superman flying, albeit by mistake, as that issue’s ghost-penciler didn’t realize that he couldn’t, reminding me of just how much of comics history came about by accident. The would-be murderers try to kill Superman with a revolver, which… doesn’t work. Meek and Bronson find their hitmen unconscious, and decide to fight fire with money, buying back all the shares from Ramsey/Superman for a million dollars, cleaning out their personal AND business funds as punishment for their corruption.

And then, a vengeful Superman smashes through the wall and drags them out into the night in their pajamas. The now-penniless crooks get to watch and taste the bitter fruit of crime as Superman shatters their dreams, their derricks, and their resolve with a series of mighty blows. He then LIGHTS THE WELL ON FIRE, burning up their last hope of profiting off the backs of being accessories to murder, leaving them with a stern but very important warning. But Matthew, you say? Didn’t you promise us TWO firsts in this story? Well-spotted, Faithful Spoilerite, and thus I direct your gaze to that last panel and the words in parentheses. Yes, my friends, Action Comics #11 features the first use of the now iconic secondary sobriquet “The Man of Steel” which, combined with a remarkably complex art job and a clever Siegel story, earns 4 out of 5 stars overall. If you only have one comic to spend your sixteen grand on, you could absolutely do worse.

Bee the dubya, that million bucks that Clark made off the deal is the equivalent of more than TWENTY-ONE MILLION dollars in 2022, meaning that Superman is now rich as hell.

One of these days, I'll show you guys the story where Superman learns to reshape his face by sheer muscle control, but either way, this is a fun one.