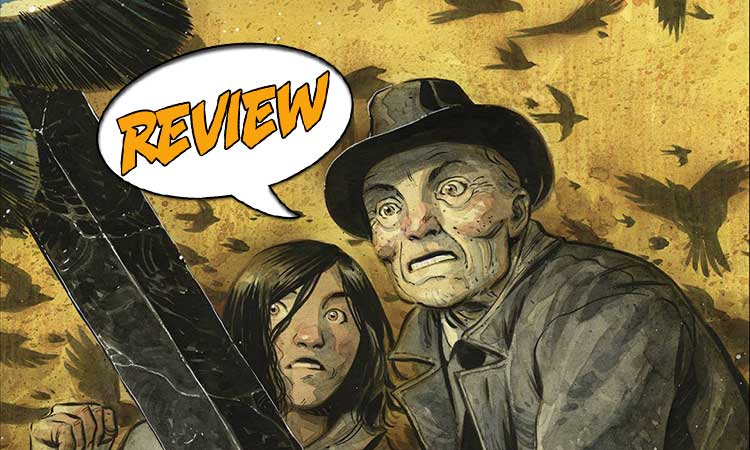 Howard is an old man, Lupe a young woman, together they have to come together to face an ancient power.  Your Major Spoiler review of The Lonesome Hunters #1 from Dark Horse Comics, awaits!

Previously in The Lonesome Hunters: An old and out-of-practice monster hunter in hiding crosses paths with a young girl that forces him to confront these chaotic creatures.

BIRDS, NOTHING BUT TROUBLE

The Lonesome Hunters #1 opens with a flashback to 100 years ago.  In the flashback the reader is told how Howard was given an ancient and magical sword.  He was also recruited into a church devoted to hunting down pagans by his father.  During one of their missions, things go very wrong.  Back in the present, we see Howard going about his day and his grouchy interactions with the people he meets.  Things then jump to Lupe, who has recently stolen her uncle’s pocket watch.  When she gets to her apartment building, she runs into Howard who also lives in the same building.  Later, Lupe bangs on Howard’s door explaining that a magpie has taken control of her uncle’s body.  Howard prepares to face the evil.

SUCH A GOOD SETUP, JUST NOT ENOUGH OF ANYTHING ELSE

The Lonesome Hunters #1 does everything right for the first issue.  It sets up the backstory quickly but in a compelling way.  It brings the main characters together in a non-contrived way.  It establishes the personalities of those characters through dialog and interactions rather than just stating it.  Those personalities, by the way, are both refreshingly different in a comic book.  Howard is presented as not particularly likable, but not in a grating way.  Nor is he shown as being particularly competent or happy with his lot in life.  WHile Lupe right off the bat is shown to have done something kind of bad, and only remorseful about it due to the trouble it caused.  These two instantly feel like a good fit together.  The biggest problem with this issue is that it’s over very quickly and abruptly as if in mid sentence.  The ending feels like a cliffhanger to a cliffhanger which ultimately gives the whole issue a very awkward feeling.

The art in The Lonesome Hunters #1 is exceptionally done.  The hand colored look makes this feel like an old animated film playing out, with some slight imperfections here and there.  The linework is especially nice to look at.  There are hints of Wil Eisner here in the way that characters can go from fairly realistic in one panel to exaggerated and cartoonish in the next, then back to realistic and nothing feels out of place.

If The Lonesome Hunters #1 is an entertaining book that doesn’t feel like it’s even trying very hard.  There isn’t a lot of action here, nor a lot of plot progression.  Yet, the characterizations of the main characters, their interactions, the few story hooks that are given, plus the artwork, make this thoroughly enjoyable to read, all the way up until the end.  The way it fails to stick the landing is a small misstep but it’s enough to have an impact on the book’s quality. 4 out of 5 stars.

The Lonesome Hunters #1 is a spectacular opening issue. It does everything a reader could hope an introductory issue does, and looks good while doing it. A poor ending though does keep this from being perfect.