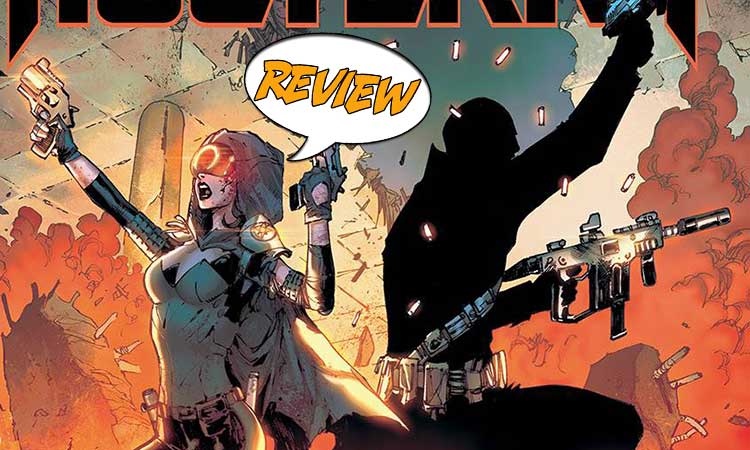 Can Val, Piper, and Sundog Convoy get out of Luna Base before the Megas breach the walls? Find out in Nocterra #11 from Image Comics!

Previously in Nocterra: Bailey has nightmares about her chat with Blacktop Bill. When she awakens, Sundog Convoy has arrived at Luna Base. The base is in water teeming with Megas and is connected to land by a single, narrow bridge. Bill is sent across as bait while the others sneak across beneath the bridge except for Adam and Piper. Bill leads them to the lab where the Nocturnes were made and then through another door. Behind the door are Sam Sugar, the man in charge of the base, and his assistant Diggs. Sundog Convoy gets the coordinates and relays them to Piper. On their way out, William and his Nocturnes arrive. It looks like one big battle, until Piper and Adam show up and use the Hepa Tongue to drain Luna Base of all its power – and its lights!

Nocterra #11 opens with a brief monologue by Piper about the roles everyone in a convoy has. In Sundog Convoy, she is the mathematician, calculating everything that needs calculating. But sometimes, when things get too complicated, the easiest way to handle them is to reset and start over. That’s what she thinks she is doing by blowing the power. The rest of the Convoy is more concerned about the Megas arriving.

Sam orders William to put off his feud with Bill and simply kill him directly. Bill taunts him further. William opens fire on Sam and Diggs instead.

Val berates Piper for being stupid, risking her own life when she is the only one who knows the coordinates of Eos. Piper did not understand that they did not have time to record them – they quickly relayed them directly to her. Instead of heading for Eos, Piper is here where she may die with the rest of them.

William threatens to cut off one of Bill’s hands. Bill is never to be outdone by those around him. He takes a stick of explosives in that hand, shoves it in William’s face, and blows him up, losing his hand in the process. Val still needs him to lead them out, even though the only way is back across the bridge which will be teeming the Megas.

And then Bill grabs Emory and demands the coordinates to Eos. He actually wants Emory to communicate them directly to the Shades. Val asks him why – he has used the Hepa-Tongue, and he knows better than anyone that Nox is trying to take over the entire planet. Bill knows this, but he believes that Nox is coming to liberate them, that the darkness is freedom, that Eos never stood a chance. But, he claims, if they side with him and Nox, they will survive. I am not surprised by the double-cross, but it is bigger than I was expecting.

Piper will not give up the coordinates. But Adam heard them too and remembers them. He rattles them off and demands that Bill tell Nox to spare them. Instead, he shoots Adam. And he makes sure that Emory heard the numbers, because what he hears, the Shades will know.

Bill gives Val one more chance to join him. Instead, she orders Emory to duck and shoots Bill. He has time to start monologuing but then is grabbed by a Shade and pulled into the water. There is not much more time. Val demands all the Flashpops they have. She is going to set up a huge distraction so the rest of them can get out. We suspect that she is sacrificing herself, even though she tells her Convoy she will be right behind them. They do not have much time if they still want to save the world.

Nocterra #11 is chaotic. The art captures and reflects this while also keeping the story coherent. We know Piper has chosen to hit the big reset button in the middle of a huge fight at Luna Base. Things are going to be messy. I appreciate that the Nocturnes have some identifying accessories now that there are more of them than Bill. Featureless characters could be very challenging to keep apart. It certainly is dramatic that Bill is willing to let his own hand be blown off if it means beating his old challenger.

When Luna Base starts flooding, there are moments where it is difficult to tell whether it has been breached, or whether this is just a function of pumps not working properly. This comes together after the incident with Bill. Sundog Convoy has a moment to regroup and then a Mega approaches. The scale makes it extra-terrifying, and this makes the flight back across the bridge suspenseful even if it only takes a few panels.

BOTTOM LINE: AND IN A MOMENT, EVERYTHING CHANGES

Nocterra #11 has taken everything we thought we knew and turned it upside down. There may be some hope to save the world, but the challenges have become much more formidable.

When the fate of the world is on the line, a few decisions can change everything.