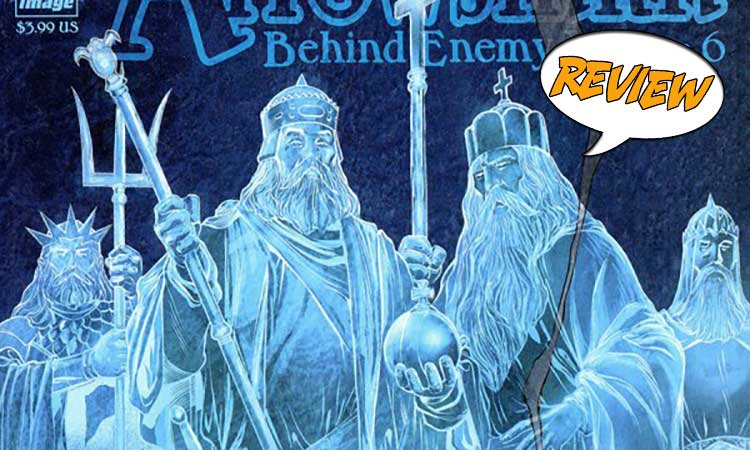 Fletcher and Guy travel deeper into occupied Swabia. A Lightborn Princess has been captured. But why? Will this make the conflict broader than it already is? Find out in Arrowsmith #6 from Image Comics!

Previously in Arrowsmith: Behind Enemy Lines: Fletcher and Guy reach the Oberwald Trollhome and are allowed to enter. The King agrees to help them, but then they must leave. Fletcher takes advantage of the freedom to explore a little. Seeing the Trolls at their nightly rituals reminds him of Rocky. In his dreams, Fletcher sees Charlemagne. Guy fills him in on some history and we learn that Charlemagne was one of the rare Herze-Kings who could draw upon magic. Magical ability is spreading among humans now, but the amount of magic in the Sunlit Lands has decreased so much they are now known as the Evening Lands. The Trolls cast the spell to find Lyraeli. They confirm she is a prisoner and is being held somewhere to the north and east.

Arrowsmith #6 opens shortly after Fletcher and Guy leave the Oberwald Trollhome. They are attacked by Sturmraben, venous flying creatures large enough to carry riders. As Guy starts to cast a spell, they exhale a noxious breath. Guy then throws Fletcher a crossbow, an unfinished one, and orders him to use it. He is momentarily confused but tries anyway. Magical bolts fly out, and he keeps the creatures at bay until Guy finishes his spell.

As they travel, they go through some small towns. Fletcher notices the propaganda posters and recalls that at home, there were similar posters. No matter which side of the war one is on, they urge the people to be wary of the evil foreigners and to work hard to protect their own troops. Then Fletcher looks at the people, and especially those who are not human. The Giants and Oakmen in Swabia look like slaves. He starts to doubt that there could possibly be a good outcome to the war. Guy agrees that war is terrible, but it has allowed him to survive, and has allowed Fletcher to become a wizard.

Fletcher dreams of Charlemagne again, that the King is trying to tell him something, but he does not understand. He wonders about something he has seen in posters in various places, the claim that the Blood Emperor is the true power behind the War. If there is an old monster at the root of the conflict, could they awaken one of the old Herze-Kings, such as Barbarossa? Guy tells him it is complicated.

Then he harkens back to earlier when Fletcher had told him he would like to continue flying after the war. If they take back his Orichalc chips, though, he would have no source for magic. Or would he? Guy suspects he may be able to draw directly on the local magic and, with a short demonstration, proves it.

They reach another Trollhome. They get an updated direction for the Princess and a warning about a great and dark power in the area and are sent on their way again. Fletcher wonders why the Prussians and Tyrolians captured the Princess considering they risk an attack by the Lightborn. Guy wonders whether there may be more to their alliance. Fletcher thinks they need more people on their side, and again he wonders about the Herze-Kings. Guy warns him that that would not be a simple matter. The ancient Kings were warlords and conquerors, not a weapon one can pick up and put down at will.

Arrowsmith #6 has terrific art. The lines are clean, the panels are dynamic, and the coloring sets off the action beautifully. In the opening attack of the Sturmraben, the skies darken from not just the creatures, but from the feathers they shed and smaller particles of darkness that seem to cloud around them. When they exhale their noxious breath, Guy and Fletcher are enveloped in clouds that are reminiscent of gas weapons used in battle. Even the glow of magic is more subdued and contained until Guy finally pulls off his big spell.

At a more personal level, we see more character growth with Fletcher. He is a young man who came into this war with the idea that he could make a difference. However, he is not so consumed by patriotism that he is blinded to the similarities between both sides. He is learning first-hand that while the conflict may rage at the upper levels of government, it is the ordinary people who do much of the fighting and bear most of the cost. He holds onto some of his idealism, but we can see the scales start to fall from his eyes.

Arrowsmith #6 may be the end of an arc, but it is not the end of the story. I like that we have slowly learned a lot about the magic in this world and gotten glimpses into the culture. It feels both modern and vintage at the same time, supported by drop-dead gorgeous artwork.

As they move further from the front lines, Fletcher’s role in the conflict becomes more mysterious.