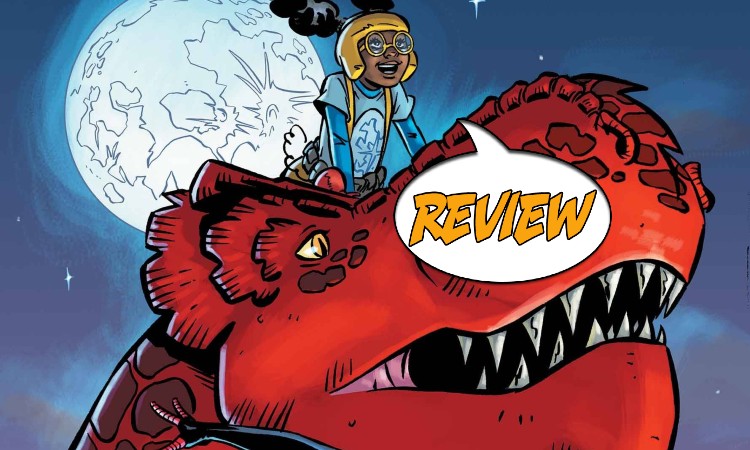 There’s a dinosaur loose on the streets of Brooklyn, but two of Marvel’s finest are on the case! Your Major Spoilers review of Miles Morales and Moon Girl #1 from Marvel Comics awaits!

Previously in Miles Morales and Moon Girl: Join Lunella Lafayette – aka Moon Girl – and her trusty T-rex sidekick, Devil Dinosaur, in their biggest adventure yet! In the first of three one-shots, Moon Girl takes on the whole Marvel Universe alongside Miles Morales, the Avengers and the X-Men.

THE DEVIL HAS GONE MISSING

As our story opens, Moon Girl and Devil Dinosaur are facing a strange, masked man who reminds me more than a little of The Riddler, but before she can wrap up the situation, Devil simply disappears! Lunella tries to find him, but gets sidelined by gym class and the terrors of middle school, and by the time she gets time to respond, the news is reporting a red tyrannosaurus stalking the streets of Brooklyn! To get there, Moon Girl forges a letter offering her a two-day tour of the Brooklyn Visions Academy, where she can access their servers for more detailed information. She follows the trail to find the dino in question, but is surprised to find it’s not her Devil at all, but some sort of clone. She also gets saved from being tyrannosaurus chow by a certain friendly neighborhood Spider-Man with a really cool new suit.

NOT REALLY MUCH OF A TEAM UP

Full disclosure: When I heard about this issue, I mistook it for one of the alternate universe takes on Miles where he becomes Wolverine, Captain America, and others, and I hoped that we’d see him as a school kid fighting with a dinosaur. What we got instead was an issue of Moon Girl with a special guest star, focusing on Lunella’s bravery and resourcefulness, with just enough Spider-Man and a “To Be Continued” ending. It’s a cute story, one that feels all-ages in the right way, easily appealing to the tweens and preteens who might find their way into a comic shop. The art is likewise fun, especially in how it displays Miles’s new hoodie/mask costume and the clones of Devil Dinosaur. With someone paying Black Ant and Taskmaster to target DD, there are still some important bits of story still unknown, but what we get is a cheerful, fun adventure with a likable protagonist.

Miles Morales and Moon Girl #1 is one of those comics whose title is liable to make some readers angry due to its not-quite-truthfulness, but the story and art are well-done and accessible to young readers in a way that makes it clear we’re trying to get some eyes on Moon Girl’s adventures, earning 3 out of 5 stars overall. It’s a better-than-average comic book, even if it’s not necessarily going to bring me back for the next issue. Then again, it’s probably not meant for a cynical Gen X reader in the first place, so that’s fine.

The team-up is pretty brief and most of the story focuses on Moon Girl, but it's an interesting beginning to a series of one shots, albeit one aimed at readers younger than me.