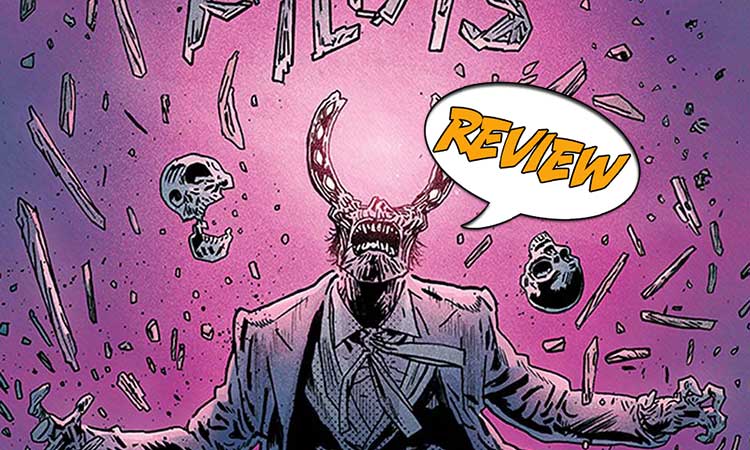 Ami and her friends are safe in the Old James House, but there is a fine line between safety and imprisonment. What options are left for them? Find out in Home Sick Pilots #15 from Image Comics!

Previously in Home Sick Pilots: In the Old James House, Ami can feel the ghosts getting weaker as Meg and the Nuclear Bastard rip the house apart. Then the final ghost appears. She used her tunnel-making ability to create one that could bring her here. The house was once her prison, and she wants to see it destroyed! But the ghost of Old James turns the power of all the house ghosts against her and jettisons Ami, Rip, and Buzz. The tide turns in the fight against Meg as Old James forces his daughter to create endless tunnels to trap all the ghosts from the Nuclear Bastard. As a final gesture, the Old James House picks up Ami and her friends one last time and takes them away from the battle.

THE CALM BEFORE THE STORM

Home Sick Pilots #25 opens with the Old James House sitting on its lot, looking like just a house. For months the Army has tried to penetrate its walls, to dig in under it, to drop down from above, all to no avail. Old James does not understand why Ami and her friends are so concerned. He can provide everything they need and can keep them safe. Ami understands that this is somehow what he always wanted, a big happy household.

Then one day, Rip comes in with news – he has found Meg. She is deep in the tunnels, still in her bloody pool, talking to her dead friends who can no longer speak to her. She feels abandoned. When Ami, Rip, and Buzz go to see her, she assumes she is in Hell. Ami tells her she is inside the Old James House. They have a plan to get rid of Old James, but they need her and the Nuclear Bastards. Meg admits to trying to kill Ami, and to killing a frightening number of people.

They have all realized by now that they were manipulated, one way or another, into doing what Old James wanted. He continues to manipulate his daughter, Juliette, but she is keeping a little section of tunnels secret from him as Ami and her friends, with help from all the resident ghosts, have built a bomb. And the payload is ghosts. So many ghosts that Old James won’t be able to handle them all. So many ghosts, so many restless spirits to be freed that the country won’t be able to ignore them anymore. Maybe people will see and understand their suffering and do something to prevent more in the future. Maybe something good can come of all of this. But they can only do it if they all work together.

Old James realizes something is up and searches for them. He finds them just as Meg agrees and lets loose the ghosts. Indeed, all of them together are too much for Old James. Meg is elated that they are finally going to be able to escape. And Ami realizes she does not know what the rest of them have come to grips with. They are already dead. That is why she can no longer talk to the Nuclear Bastards.

They vanish. The house collapses and is eventually torn down. Another building goes up in the same location. Years pass. Is punk rock still a thing? Has the world changed?

A TOUCH OF MELANCHOLY

The art of Home Sick Pilots #25 continues to be fascinating. At the beginning, inside the James House, it is almost unnaturally calm and even peaceful. Old James is trying to make all his resident ghosts into something akin to a family, but we can see they are all still individuals and do not have any common bonds. Juliette takes center stage, held in ghostly chains that symbolize her life and death of entrapment.

Now that the house is intact again, we get a sense that it contains a large number of shifting rooms and hallways. But even Old James cannot match the scale that Juliette can. Her tunnels have become part of the house, but remain organic in form, a rounded, curving maze of passages that can hide the bomb which, when we see it, is made from parts of Meg’s old machine body.

Home Sick Pilots #25 adds new meaning to the idea of living fast and dying young. We have come so far from where the story started. The ending is grand and fitting, and the epilogue is actually hopeful. The story, art, and lettering work to bring everything together into a seamless whole. As it was from the very beginning, this is a ghost story like you’ve never seen before.