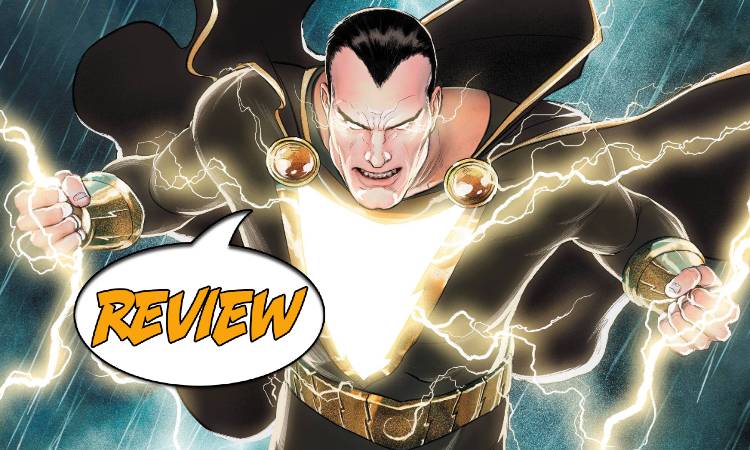 Teth-Adam is about to face the one thing he’s never had to in his centuries on Earth: His own mortality. Your Major Spoilers review of Black Adam #1 from DC Comics awaits!

Previously in Black Adam: There is no forgiveness for Black Adam.
This is the reality Teth-Adam, immortal man of indomitable will, must face when he discovers he has been infected with an incurable plague destroying his immortality. Haunted by the specter of centuries of dark deeds, Black Adam transfers his powers to a worthy successor who will redeem Adam’s legacy and defend their ancestral homeland of Kahndaq… or at least that was the plan.

MEANWHILE, BEFORE THE DEATH OF THE JUSTICE LEAGUE

In Washington DC, Teth-Adam is testifying before a Senate panel, only to shut down any and all inquiries into his leadership in Kahndaq. The sequence is intercut with a vicious battle with Darkseid that apparently took place the night before (but, confusingly, before the battle with Darkseid seen in Justice League #75 that left the League dead). Before the proceedings can finish, though, he receives a call from his State Department contact with even worse news: One of his main political rivals has been assassinated. When he investigates, Adam finds that one young man is implicated in the murder, but that man, a med student named Malik White, has no idea what’s going on. Of course, the necrotic infection that is spreading up his right hand makes it clear that Black Adam has no choice but to reveal the truth.

Malik is his descendent… and the new Black Adam!

On the one hand, I enjoy Christopher Priest’s writing style and his realistic dialogue, especially from young men like Malik, but that vernacular doesn’t feel right from Black Adam. After reading the last few months of Justice League, it’s even harder to reconcile this take, especially when it comes to dialogue like “Yeah, yeah… Dammit, Shep!” This issue also features a very small disclaimer that it takes place BEFORE the death of the League and the lead-up to Dark Crisis which I didn’t catch on the first read-through, which is very distracting to me. The art by Rafa Sandoval is fine throughout the issue, especially when it comes to Malik’s facial expressions and emotions, but the depiction of Black Adam both in and out of his Shazamified form is out of sync with recent portrayals, which would be fine if we were still in the “continuity schmontinuity” phase of recent DC comics, but once again the Dark Crisis crossover casts a shadow that affects my enjoyment of the book.

BOTTOM LINE: I DON’T HATE IT, BUT IT’S PUZZLING

All in all, Black Adam #1 feels like a comic book from an earlier portion of the post-Flashpoint DC Universe and on those terms it’s an above average outing for the power of Shazam, with a fun Priest story and okay art combining for 3.5 out of 5 stars overall. If it weren’t coming out at this point in time, I might even rank it slightly higher, but reading it at this time in DCU history makes it feel just out of sync enough to be confusing.

This doesn't feel in any way related to the Black Adam we've been seeing in Justice League and the timing is bizarre, to put it mildly, but it's a solid Priest story with okay art.