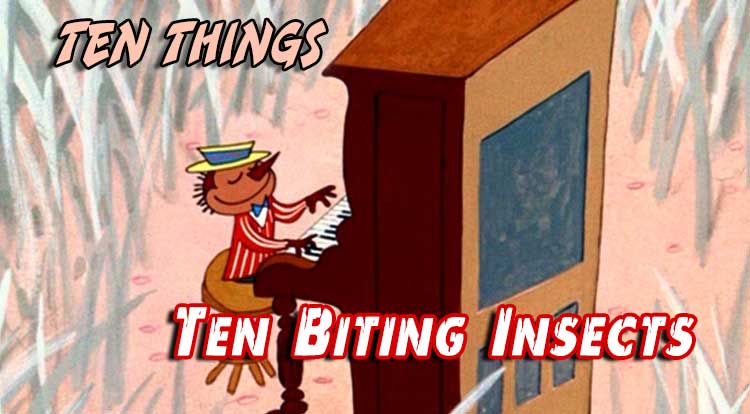 Summer has arrived at Major Spoilers, and with it come the summer pests. Some of them are even our favorite super-folk! Welcome to Ten Things: Ten Biting Insects!

Whooshman-Bicarbonate Films, in conjunction with An Amateur Comics Historian and Orkin-Man, Presents: The master of the style of kung-fu that bears his name and member in good standing of the Furious Five, Master Mantis may be small, but he’s no less deadly for it. Indeed, his speed and agility serve him well, though he had to work hard to overcome the impatience that came from moving so much faster than everyone around him. He also makes up for his size by being extra-loud and sounding like Seth Rogen. All the various mantises of the order Mantodea are mostly ambush predators, but a few ground-dwelling species are found actively pursuing their prey and have been known to bite when threatened. A member of the name-still-in-the-works super-team of Super!, Andy Alvarez seems to have a lot of similarities to Spider-Man in his move set, but is also allowed to say the f-word. Though brave and very tough, his biggest achievement in the issues I’ve read was surviving a massive beatdown by the ultra-powerful armored villain Black Atom. Sure, he was seriously outgunned, but at least he brought his bag of hand grenades! His insectoid namesake is a member of genus Solenopsis, all of which have potent stings. One of them, solenopsis invictus, is known to be a dangerous and invasive species. The advent of Japeth’s mutant powers was so painful and so debilitating that his doctor diagnosed him with stomach cancer. Thankfully, Magneto discovered the young mutant and helped him to understand that his digestive system was a pair of enormous slugs with their own sentience. He was killed in action, then somehow mysteriously returned to life off-panel. After a series of insulting cameos throughout the Marvel Universe, Maggott rejoined the X-Men in their new island home of Krakoa. His bug namesake is the larva of a fly (order Diptera), especially house flies and blowflies.

Hot-tempered and of questionable hygiene, The Flea is a luchador student at the Foremost World-Renowned International School of Lucha. His name is unknown, in keeping with masked wrestling tradition, but his parents (Mr. and Mrs. Flea) run the local donut parlor. Like his mother and father, The Flea speaks in the third person, explaining his philosophy thusly: “For The Flea, it’s all about The Flea. He’s simply trying to be all The Flea that The Flea can be.” The creature he is named for comes from the order Siphonaptera, including 2,500 species of small flightless insects that survive as external parasites of mammals and birds, chewing through the skin and sucking their hosts’ blood. A member of the Farm League, a team of funny animal parodies of The Justice League, Cybug (real name unknown, but I’d suggest Tick-tor Stone or perhaps Vic Stonefly) has a helicopter for a butt.

Since “bug” is a generalized term for any terrestrial arthropods with at least six legs, he totally fits the category at least 55% of the time. A native of Earth-1610, the Ultimate Universe, Orb-Weaver (real name unrevealed) seems to have psionic web-slinging abilities and serves as a member of Quicksilver’s Brotherhood of Mutants. (The “Evil” is passe in this world because even the heroes are evil here.) He shares his name with a number of builders of spiral wheel-shaped webs often found in gardens, fields, and forests.

At this point, I await the debate about the difference between insects and arachnids, but remind everyone of the Ten Things Mantra: My List, My Rules.

An artificial lifeform known as a Buddyroid, Beet J. Stag is the companion and partner of Masato Jin, who serves as his Gold Ranger counterpart in the Tokumei Sentai Go-Busters team. J’s position is unusual, as the team’s other Buddyroid robots are part of their mechas (what we in the US call zords), while he is a full-fledged member of the team. He takes his name from the stag beetles, a family of something like 1,200 species of beetles in the family Lucanidae. In Japan, Kuwagatamushi/stag beetles are a common animal theme, usually partnered with a Rhinoceros beetle, which adds another dimension to J and Jin’s insect team. A pastiche of Marvel Comics’ Wasp, Jan (last name unrevealed) gained the ability to shrink down and grow insect wings from her boyfriend, Hector Prynne. (For his part, he becomes the giant bruiser called King-Size.) Clashing with the Kooky Quartet, a Fantastic Four parody and the members of the Inferior Five, the Terrible Tsetse Fly almost got away with a long-term robbery spree.

She is named for a group of bugs that encompasses all the species in the genus Glossina, which are placed in their own family, Glossinidae, and are known not only for their painful bite, but for carrying African Trypanosomiasis, which can become a lifelong chronic disease. Le Mosquito may look familiar to fans of old-school Archie/MLJ Comics, and the reason is simple: He is The Fly, as seen in French reprints in the pages of Sunny Sun magazine. As such, he is young Thomas Troy, only pronounced “To-MAHSS Twah”, who found a magic ring and gained the powers of ancient fly-people. Weirdly, he is billed as The Mosquito, Mosquito of Justice, which feels a bit redundant in English. His insect counterpart is a group of species of small flies within the family Culicidae that you NEVER want to look at in a microscope. Once again, this week’s topic, Ten Female Clones, is all me, but feel free to follow along @MightyKingCobra to suggest a topic of your own! There’s always more Ten Things madness on my Twitter or check out the full Twitter archive here! As with any set of like items, these aren’t meant to be hard and fast or absolutely complete, if only because bug names are all the rage, thanks to that Parker kid. Either way, the comments section is below for just such an emergency, but, as always: Please, no wagering!