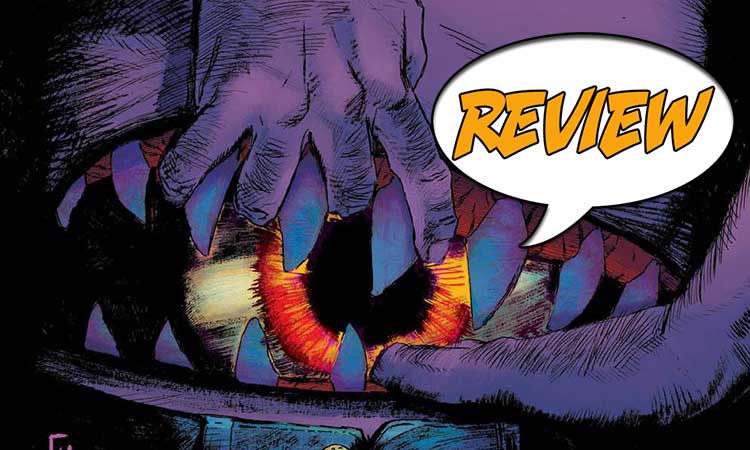 As Erica tries to find a lead on her latest monster, Cutter arrives at the House of Slaughter, eager to take on the hunt for Erica. Who will have success first? Find out in Something is Killing the Children #24 from BOOM! Studios.

SOMETHING IS KILLING THE CHILDREN #24

Previously in Something is Killing the Children: Erica is picked up by the Sheriff in Tribulation, NM. She calls Big Gary, now retired, but helping Erica find monsters while keeping her actions hidden from the House of Slaughter. She talks to the Sheriff and claims to be a reporter investigating the serial killer in town. He talks to her because he has no idea how to investigate this, and it does not work out like it does on TV. Riqui orders Gabi to stay home since she cannot take her to the bar where she works. The hunter from France arrives in Chicago. On her way off the plane, she overhears a woman complaining about her. She follows her into a bathroom, kills her, and then asks Cecilia to deal with the clean-up. On the way to the House of Slaughter, she asks questions about Erica.

WHEN THE HUNTER BECOMES THE PREY

Something is Killing the Children #24 opens at a motel. A couple on vacation, probably overtired from traveling, are bickering because the man cannot find his bathing suit. Their two girls are already in the pool. This bickering is familiar to them. Then they see a man in the shadows watching them and one of the girls shouts at him to get away. He steps closer. He has no face. Then a toothy mouth opens in the middle of his stomach. The girls scream.

Gabi sneaks back to where her family died. The bloodstains are still there as well as numbers marking the crime scene. The cat, who never liked her, meows at her, but when she bends down, it slashes at her with its claw. Gabi goes through the house. She feeds the unappreciative cat and gathers up some things into a backpack. By the pool there is another bloodstain and a chalk outline. Overcome, she screams, “Why did this happen?” and a voice tells her that something very mean was very hungry. The voice is that of Octo. Gabi picks it up.

Meanwhile, Riqui is trying to call Gabi at home, but she doesn’t pick up. Worried, she texts Sheriff Carter who agrees to send someone to check on her. The stressed Riqui asks her lone customer if she would mind if she smoked. That lone customer is Erica, who first asks for a drink and then asks about Gabi. Riqui takes a look at Erica and realizes she is the woman Gabi saw in the parking lot the other day. Erica claims to be a reporter. Riqui is skeptical and demands proof. Erica does not have the resources to set up a backstory and eventually just tells her that the killings will continue, and they won’t be able to stop them.

Meanwhile, at the House of Slaughter, the Dragon and Cecilia talk with the woman from France about Erica. She was one of the best hunters they had ever had, but she could not conform. She was not discreet. She would risk their secrets in order to protect a child. The hunter, who goes by the name Cutter, sees this as a fault with her training. Jessica is long since dead, and her handler, Aaron, is also dead. Cutter bluntly gets to the point. Erica has continued hunting monsters, and Slaughter does not find out until after the fact. She has killed eight monsters since Archer’s Peak. Clearly, someone from inside must be helping her.

The art of Something is Killing the Children #24 is spare, but it gets right to the emotional point of each scene. The scene where Gabi returns home is a terrific example of this. Gabi is young, hurting, and angry – we have seen all that before. She is resourceful and can be sneaky, but it is not until she is all alone that we catch glimpses of her sadness and her vulnerability. Beneath the façade, she seems to be a good and caring person. She feeds the cat even though it lashed out at her and at the pool, she allows herself a moment to grieve.

I thought Cecilia was an unlikeable person, but Cutter outdoes her. In her body language, we clearly see her confidence and arrogance. The Dragon may be the head of Slaughter, but Cutter has no qualms about asking him for some of his gummies. She is so comfortable, it almost looks as though she is leading the discussion, and that Dragon’s office is her. Her smile is cruel when she points out that they have not been able to do anything about Erica. And her utter disregard for others sets her up as Erica’s counterpart and opposite.

Something is Killing the Children #24 is not just Erica’s solo hunt for a monster. It is the story of her doing this despite being a target for the House of Slaughter and having no idea that they are upping the stakes. The suspense is wonderful.

Something is Killing the Children #24

Erica desperately tries to find a lead on the latest monster she is hunting.