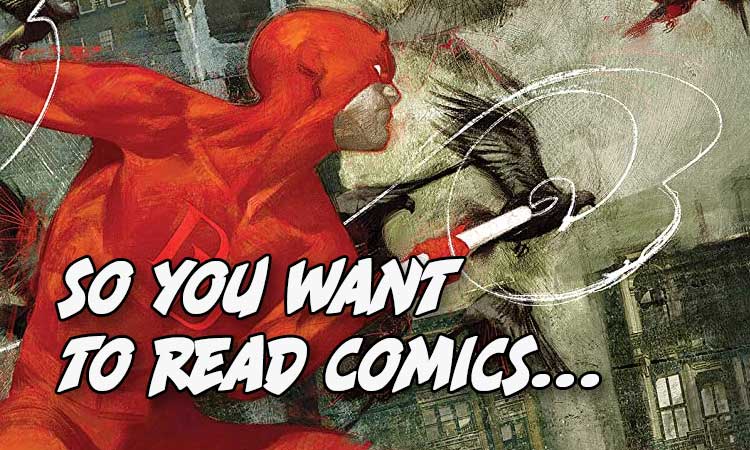 So You Want To Read Comics: Religion

We’re feeling the spirit with this week’s “So You Want To Read Comics”.  This is our weekly feature where we take a look at a single topic or genre, then give you two comic book recommendations, perfect for new readers, based on that topic or genre.  This week we’re taking a religion.

Just a quick statement, this is not intended to be an endorsement of any belief system or religion over another.  This is purely designed to highlight comic books that utilize religion in their plots or concepts.

In the world, there are approximately 4000 different religions with over 6 billion people claiming to be adherents to one of those.  So, it should go without saying that religion has a presence in many people’s lives and thus has found itself being incorporated into entertainment and pop culture. For millennia the stories and lessons shared in religions have been a source of inspiration.  Sometimes these products celebrate, sometimes they’re more skeptical and ask the viewer to question their beliefs.  In Ancient Greece, plays often told stories involving the gods and goddesses that made up their pantheon.  For a more current example look no further than the books (and their movie adaptations) of Dan Brown that involve fictional conspiracies involving the Catholic Church.

So, let’s take a look at a couple of graphic novels that utilize religion as an integral part of their stories.

Set in a far away solar system deep in space, Invisible Kingdom tells the story of two women who find themselves tied up in a conspiracy involving the biggest church called The Renunciation in the galaxy and the largest corporation called Lux. What then unfolds as the two try and reveal the secrets they’ve discovered is a story about the differences between organized religion and everyday practices of faith, the thin line that exists between belief in a god and a devotion to money, and the ways that devotion can be manipulated by selfish people who hold powerful positions.  This story is paired with colorful, psychedelic, and imaginative art that hides just as many layers as the story does.  This series has concluded, so it can be read in its entirety across three volumes.

Daredevil: To Heaven Through Hell

Religion, specifically Catholicism, has always been an integral part to the character of Daredevil.  Throughout the duration of his existence, writers have utilized his faith as a source of pathos and conflict.  How can a man who has become a Norse god, met a Greek god, and fought malevolent gods from deep space, believe in his god? Some of these questions become the focus of this series, which finds Daredevil trying his best to live as close as he can to Catholic doctrine in order to atone for a mistake made.  In this series we find Daredevil fighting with himself almost as much as he does with the various villains tormenting his neighborhood of Hell’s Kitchen.   The events of this volume set the tone for all the Daredevil stories since, so it’s a good place to jump into the series.

What do you think of these recommendations? Do you have any of your own? Let us know in the comments section below.