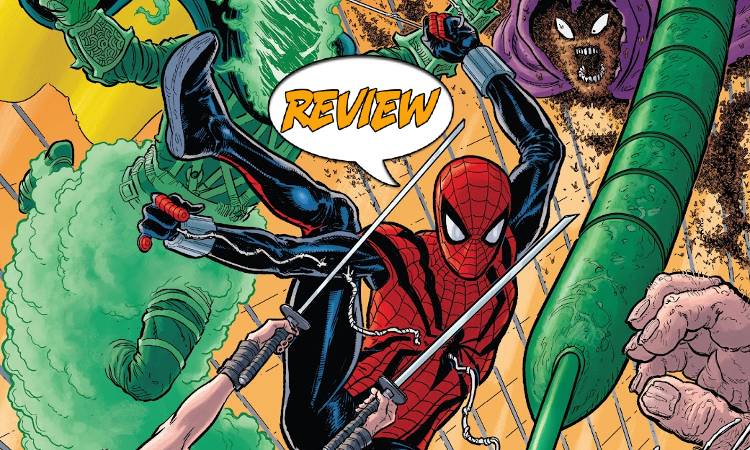 The inmates aren’t running the Ravencroft Asylum, but they’re more than ready to wreck it unless Spider-Man gets his act together. Your Major Spoilers review of Ben Reilly: Spider-Man #5 from Marvel Comics awaits! Previously in Ben Reilly Spider-Man: Spider-Man must take on the entire Ravencroft Institute for the Criminally Insane in deadly combat. But must he face them all alone?

Or will an unlikely ally step in?

BACK IN THE DAY

After run-ins with a number of villains, Spider-Ben is stunned to find that it was all a ruse by HIS clone, Spidercide, to get him inside the walls of Ravencroft. He then freed the inmates (Typhoid Mary, Mister Hyde, Mysterio, and more) to attack the security teams led by John Jameson, forcing the Sensational Spider-Man to act! The battle takes a lot out of him, but he gets support from his friend Eddie (secretly the were-rat called Vermin) and from Mysterio, of all people, who wants to save the hero for himself! The tide is momentarily turned, but Spidercide frees the unpowered inmates as well, all of whom have a spark of his own personality thanks to his gross powers, and sheer force of numbers allows them to beat Benjamin Reilly nearly to death.

And then, seeing his “brother” hoisted up by the crowd like a prize, something happens to Spidercide…

The last half of this issue is pure DeMatteis emotions, as Spidercide realizes that Dr. Kafka was right, that he only hates Ben Reilly because he hates himself, and the sight of Spider-Man nearly dead triggers a response. It’s really well-written stuff, leading to a sweet moment between two men with Peter Parker’s face. Baldeon’s art is well-suited to this story, making dramatic moments out of The Scorpion’s sneer or Typhoid Mary’s thousand-yard-stare. That emotion is a bit undercut by the cartoonish exaggeration of head size, though, and there are several points during the battle where it’s impossible to track events as happening in a real three-dimensional space. Not only that but, as much as I like the emotion involved in Spidercide saving his fellow clone, he’s spent the previous four-and-a-half issues of the book actively trying to kill Reilly. The switch in motivations feels unmotivated and a bit arbitrary. I do like the new (for some values of new) Spidercide costume that debuts in this issue, as his original design puts the “ugh” in ugly.

BOTTOM LINE: THERE’S ALREADY A SEQUEL IN THE WORKS

All told, Ben Reilly: Spider-Man #5 serves to wrap up this arc in a way that feels nice until you think too hard about it, and looks good most of the time, earning 3 out of 5 stars overall. I’m kind of intrigued by the idea of untold tales of Ben’s run as the one, true Spider-Man, and even though I didn’t LOVE this, the announcement of the next Reilly story being Kraven’s Lost Hunt will bring me back. it’s really a book for readers who love Ben as Spidey and wish he had been given more time to grow into the role and on that level, it absolutely delivers.

This is the book for Ben Reilly fans who are mad about his hard road and fan pushback, delivering on the promise of a "lost adventure" that feels like an regular Spider-Man book from 1996 (in ways good and not so much.)