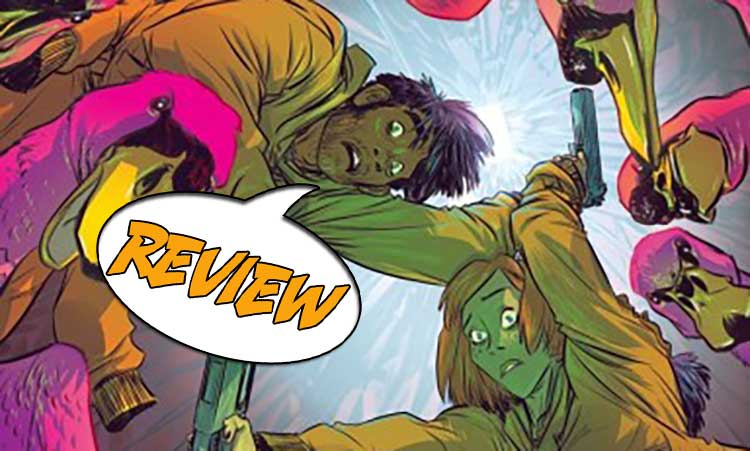 Stetson uses Finch’s dream to corner Valkira, only to find out that this may have been a setup. Where is Valkira now? In the world of dreams, or in the land of the living? Find out in Slumber #4 from Image Comics!

Previously in Slumber: Five years ago, a little girl named Lyla has a nightmare, and when she awakens, all her stuffed animals and toys are cut up. She insists it was not her; it was Valkira. Therapy has not helped her, and her parents turn to Stetson for help. In the present, Stetson and Jiang enter Finch’s dream. The reason he cannot find his serial killer in the waking world is that she is hiding in his dream. But Stetson warns Finch that anything that gets killed in his dream will be erased from his memory. Valkira’s trail leads them to a funeral. Valkira takes on the body – which is that of Finch’s brother!

A KILLER WHO CAN HIDE ANYWHERE

As Slumber #4 opens, Ed, in the waking world, listens to what is happening in Finch’s dream. Finch does not want Stetson to shoot his brother. Stetson claims it isn’t his brother; it is Valkira. The buzzer sounds and Ed asks if Stetson was expecting any other clients. Stetson does not have time for this. Finch does not want his brother to die…again, and he certainly does not want to lose his memories of him. They continue to argue, but Stetson notices they are surrounded by swans, and Finch’s brother talks oddly. Stetson shoots him in the knee.

It turns out it isn’t Finch’s brother, and it is not Valkira either. Stetson pulls off his mask, revealing Caer Ibormeith, a shapeshifter, and trickster. He gleefully tells them Finch was the bait. Valkira lured them into his dream so she could get to where she wanted to go. Stetson radios Ed telling him not to let anyone in.

It’s too late. Someone has gotten into Stetson’s lab. Detective Aadya calls Finch. They have another murder, and Stetson’s business card is at the scene. The only thing that is missing is the body. But they do find a bloody bunny slipper that does not belong to the tenant.

Stetson returns to her lab. Ed is unconscious, not dead. Jiang wonders why Valkira did not kill them when she had the chance. Finch wakes up and actually remembers his dream. Stetson figures that they are alive because Valkira needs them to be alive. She opens a closet full of souvenirs she has brought home from dreams and talks to Gary, a head in a jar. Gary claims to have kept his eyes closed, but he did see enough to give a brief description of the woman who visited and trashed the place. The description matches that of Sadie, Finch’s fiancée.

Sadie returns to the hospital where she works. Stetson and Finch are close behind. The only problem is they may not be able to tell if Valkira is still in her. Sadie spots Finch and runs over to him. She blacked out and does not remember what happened. Stetson watches her and looks at everyone else around. Trying to spot Valkira is made more difficult because she sees not just the people, but their nightmares. Detective Aadya arrives. One thing leads to another. Stetson shoots Aadya and Sadie with a tranquilizer gun, and she and Finch leave with Sadie. Finally, she has Finch scan his fiancée, and they find that Valkira is not using her body. She is somewhere else.

Slumber #4 has art that is loose and kinetic. It switches back and forth from the mundane to the surreal, and it pulls no punches with the surreal. In Finch’s dream, Stetson and Finch appear real, if tense, wearing similar orange jumpsuits and holding guns. Finch’s deceased brother is green with featureless red eyes and the bloodstains from three bullet wounds marking his otherwise white shirt. Around them are a bunch of pink swans. By this time, we have seen enough nightmares that we don’t find the swans to be particularly remarkable. This nicely sets up the Scooby-Doo-esque reveal that Finch’s brother is someone else entirely.

To realize that Valkira could enter the waking world and control someone is chilling. Finch’s desperation when he realizes that Sadie could be at risk is palpable. But the trip to the hospital is even more revealing when we see Stetson’s reaction. She is hardened and confident even in the strangest and most horrible of nightmares. But now we understand that she sees nightmares even in the waking world. Reality is a minefield for Stetson to navigate. When she takes a clown hostage to get Aadya to let them walk out, she thinks she has a hostage. We see that she has her arm around nobody because it is a nightmare.

Slumber #4 takes a tale of hunting a serial killer and twists it by sending it – literally – into the world of dreams and nightmares. Detectives try to make sense of what is going on while struggling to balance reality and unreality in this tense and gripping mystery.

How do you hunt a nightmare who could be hiding literally anywhere?