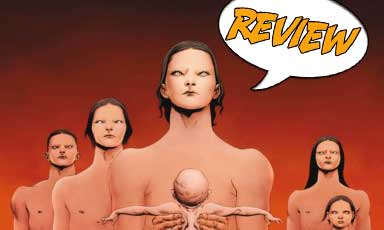 The second coming of Jesus is on the way, and is on;y $99.99 on Pay-Per-View.  Your Major Spoilers review of Seven Sons from Image Comics, awaits!

Previously in Seven Sons: Twenty-one years ago a prophet predicted that a miracle would happen and to everyone’s surprise, it did.  This forever changed the world into a society obsessed in every way to the results of this miracle.

THIS IS THE DAY…

Seven Sons #1 opens up in New Canaan (formerly Las Vegas) as the world gets ready for a big event happening that night.  Things then shift to one of the Seven Sons in a flashback.  After appearing on television he is attacked by a terrorist group who succeeds in their mission.  This is then revealed to be a recap of past events that is being played on a talk show that is interviewing the last surviving Son.  It’s then explained that on this day it was prophesied that the second son of God would be crowned.  Interspersed with these events, scenes of another person crawling out of a sewer, wandering about the city, then collapsing in a convenience store are shown.  Also, in the mix are scenes of a group hellbent on killing the last of the Sons.

Seven Sons #1 is an unsettling dive into the ways that zealotry, commercialism, and hype intersect with one another.  The story is laid out in a non-linear style with one scene melting into another, but never revealing enough information to give the reader anything to grasp onto as real. Much of this issue feels very much like “setting the scene” and in that regard, it does a pretty good job.  The world is revealed to be as if an infomercial played on an Evangelical Christian tv station had swallowed the world, chewed on it a bit, then spat it out.  It makes for compelling reading, even if some of it is still shrouded in mystery.  The problems come in when it brings in other religions and how they’re depicted.  While it does seem that the approach is to show all who adhere to a religion in a poor light, there is a particularly violent filter placed over a group called Allah’s Watchmen. The lack of subtlety doesn’t hurt the story, but it does make this somewhat difficult to read.

The art of Seven Sons #1 is perhaps the most fitting an art style can be to a given story.  Everything in this issue looks distorted, wrong, askew, sinister, and plastic. A lot of this effect is conveyed with the use of blacks and dark hues over very bright, nearly over-saturated colors. The panel layout in this issue is very jarring and helps add to the unsettling nature of this story, in that it’s difficult to tell in what order some of these panels should be read in, it’s unclear if this is intentional or not though.

Seven Sons #1 is a powerful opening to a miniseries.  It introduces a world full of personality, for better or worse, that seems appropriately sinister for this story to take place.  Its lack of subtlety, especially when handling analogs of religions, makes some of this troubling to read.  4 out of 5 stars.

Seven Sons #1 is a challenging first chapter. It sets the scene effectively with use of its strong art, but makes the reader work through a non-linear story to get any real details.