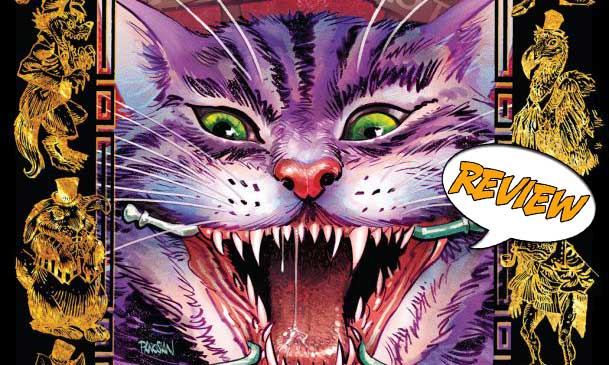 Alice Ever After #3 Review

In the asylum, Alice finds Wonderland but also finds danger. Will Mistress Hulda protect Alice as an investment, or does she have deeper plans of her own? Find out in Alice Ever After #3 from BOOM! Studios.

Previously in Alice Ever After: Alice has checked herself into an asylum where she can spend more time with her friends from Wonderland, and we see her talking and dancing with them. As she dances with Tweedle Dum and Tweedle Dee, the scene changes to London where she is in the asylum and an orderly is dancing with her unconscious body and another is looking at her dress. Matthew, another patient, knocks on the door and says Alice has a visitor, her sister Edith. Alice assures Edith that she is being cared for well and the patients are unusual. After she leaves, Matthew introduces her around, then shows her the locked door to the cellar, where the drugs are kept. Alice meets Mistress Hulda, the contrary woman in charge. And that night, Matthew finds her again, this time with keys to the cellar.

EVERY TRAUMA HAS AN ORIGIN

Alice Ever After #3 opens as the two orderlies find Alice and Matthew in the cellar. They offer to quietly sneak back to their rooms, but Thomas and Theodore have other ideas. They inject them both with liquid heroin and fill more syringes. Fortunately for them, Mistress Hulda walks in on them. Alice is important; her father has money. Hulda makes it clear that Alice is off limits for their sinister shenanigans while they try to shift blame on each other. Hulda has them carry Matthew and Alice up to the clinic.

When Alice is affected by the drugs, her mind goes to Wonderland. She meets the Cheshire Cat who gives her cakes to taste, one of which makes her shrink and one of which makes her grow. Their conversation is reminiscent of therapy as both cakes make her feel like she does not fit in. She has not felt like she fit in since before her mother died. She puzzles for a moment on why she always seems to go the wrong way, when the Cheshire Cat turns into Morton.

And finally, we get some back story that helps show us how things got to where they are now. Alice’s memories of her childhood were good. Lorina played with her happily, and Edith was a much-loved baby. Her father was a busy and prosperous dentist. But here life takes a bit of a turn. Dr. Lutwidge mainly made dentures for his patients. Porcelain was commonly used for this, but nothing looked more like teeth than actual teeth. In the finest of Victorian medical traditions, he was also a grave robber for teeth. Alice’s mother passed away, and not only did he harvest her teeth, but that was the night Alice managed to sneak in to spy on his work. And that was when he started giving her liquid heroin. It is awful and feels so very Victorian.

Alice awakens in the asylum clinic and Edith is there. She asks if Edith has ever watched their father at work. She hasn’t, although to her, Dr. Lutwidge’s work seems almost magical. Alice confesses she once saw him working on their mother. In the shadows, Mistress Hulda overhears this. Edith leaves, desperate to get Alice out. And Mistress Hulda goes to one of the cells to pay a visit on Dr. Madsen to inform him that she may have another patient for his research.

For a book that is not hugely gory, Alice Ever After #3 is very creepy. Theodore and Thomas are large men, and they already come across as creepy. We don’t see them doing anything horrible, but there are enough hints about them that our imaginations connect the dots. With their beetled brows and false smiles, they come across as horrific. But even they back down before Mistress Hulda, who carries forth with her Queen of Hearts vibe even after hours.

There are two artists on the book. Wonderland has its own style entirely, and in this book, it makes sense. It amplifies the feeling that Wonderland is a different world. I do enjoy the details that it brings in, such as the Cheshire Cat with his enormous toothy grin, as well as the cake that has magical effects. But what really works is the way characters from Wonderland gradually morph into real world characters just gradually enough that the connection feels real.

Alice Ever After #3 is an unusual book that explores trauma through a lens of Victorian horror. Moments vary from fanciful to thoughtful to outright sinister, and as the pieces start fitting together, it is becoming even more engaging.

If Wonderland is Alice’s refuge, what horrors is she seeking to escape?