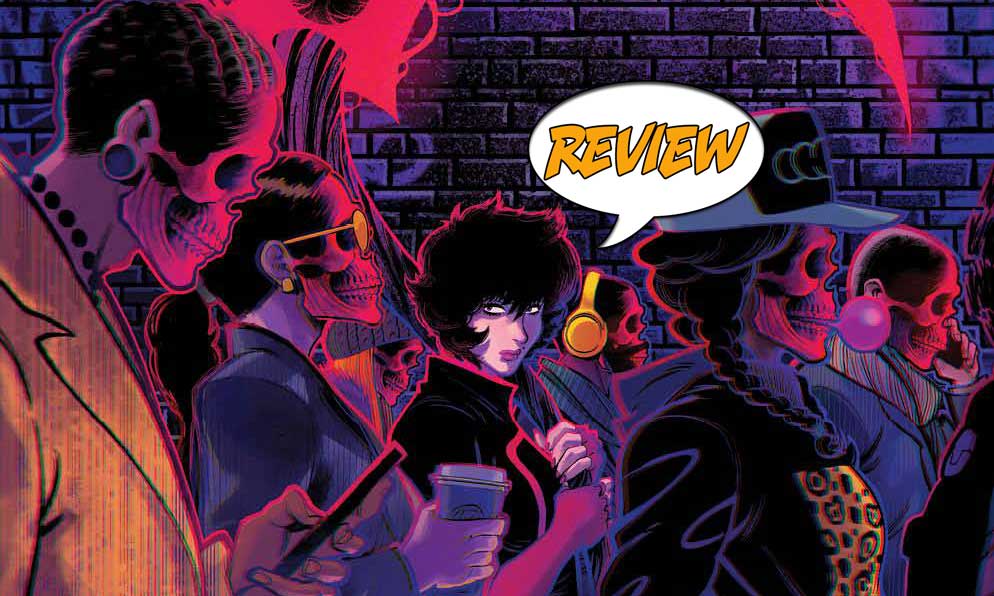 Jess has a gut feeling that her current problems are related to the mystery of her own death, but her supervisor, Adira, won’t give her any information. Does Adira have something to hide? Find out in Grim #2 from BOOM! Studios.

Previously in Grim: Jessica Harrow, a Reaper, collects the soul of Bryan, who doesn’t seem to realize that he is dead. Once he does, he tries to make conversation by telling her what happened. About the only thing he learns about Jessica is that she does not remember her own death. They arrive at a very utilitarian afterlife, where she leaves him in an auditorium until someone comes for him. On her way out, she runs into two Reaper friends, Eddie and Marcel, and realizes her scythe is gone. Bryan took it and returned to New York and to his ex. Jessica hunts him down. And then the impossible happens – a normal mortal is able to see her!

SEARCHING FOR THE TRUTH

Grim #2 opens in Mexico City on El Día de Los Muertos. Two young women, Ashley and Aubrey, are there to experience it and realize it is a celebration of life. Then a person cloaked in black runs into them and reaches out for Ashley. Aubrey grabs her and runs, but it looks as though this is Death, who says that the ledger must be balanced. Many perish.

Jessica has her scythe again and has Bryan in her custody. She and her friends talk about how she was seen, and how that should not be possible. Jessica is not alive; she should not be able to interact with the world of the living at all.

Jessica then talks with Adira, her supervisor. She wants to know how she died because she feels it may be connected to why the policeman was able to see her. She wants to see her file. Adira refuses – again. Only Death has access to those files, and Adira does not want to risk her own position, especially for a Reaper who managed to get her scythe stolen. Then, to top it off, she informs Jess that she is being suspended, at least temporarily. I like this and how it feels like the set up of a buddy cop story even though we don’t have buddy cops here. After Jess storms off, Adira’s assistant Vincenzo speaks with her (Adira). Someone, or something, knows as the End, is awake. And apparently, Death is not around.

Jess tells Eddie and Marcel that she has been suspended. Jess is now even more convinced that her death has something to do with what is going on, and that Adira is hiding something. She wants to break into the records room and find out for herself, but she needs a little help. Eddie distracts the records keeper with a little music and Marcel and Jess sneak into the middle of a Baroque construction of pneumatic tubes.

They have no idea how it works. Marcel touches one of the tubes and his death file is promptly delivered into his hands. Jess asks if his memories of his death are painful, if he wishes he could forget. He has a lovely memory of being with his partner. His death may not have been easy, but he has a good memory. Jess touches a tube, and her death file comes to her. To experience it, she must open it up.

Color again plays an interesting role in the art of Grim #2. The opening scene is certainly very colorful and I would describe it as cool versions of colors we generally think of as being warm. Magentas, purples, and golds are prominent with enough variation that it reads as a whole spectrum, but with some distance that separates the scene from the world of the Reapers. I also like it as a way of exploring different ways to think about those who are dead and gone from us.

When we return to Jess, we return to a blue and purple world where everyone dresses in a variant of red and black, each according to their time period. It is a fabulous way to give Reapers incredible variety while still having them identifiable as being similar. I like the way song lyrics add flavor to scenes, especially since the letterer has made them wind through the panels, fitting in around the characters. But truly, the most fabulous scene is the records room with the amazing array of pneumatic tubes. It almost looks like a pipe organ.

Grim #2 expands on the original set up and lets us in on a larger mystery, or perhaps even mysteries. I like the character development we see so far, and I definitely enjoy the sensation that the story does not feel entirely familiar.

Jess feels the mystery of her death, and her ability to be seen by the living must be related.