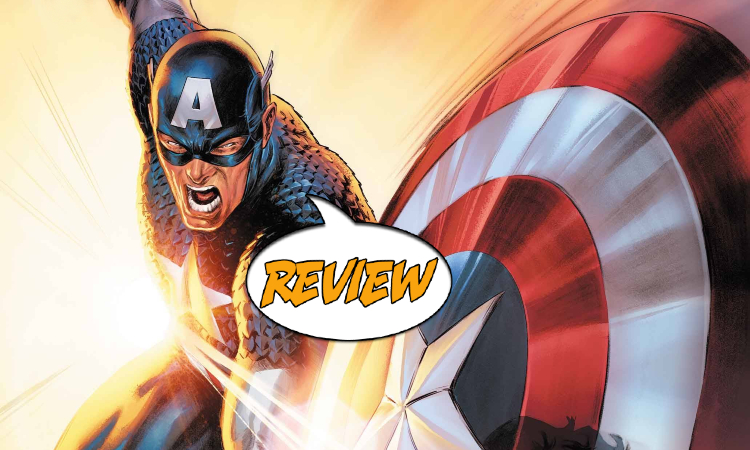 After years of holographic bunkers and Avengers secured facilities, Steve Rogers is looking for a new place to call home, but what is the untold secret of his iconic shield? Your Major Spoilers review of Captain America: Sentinel of Liberty #1 from Marvel Comics awaits!

Previously in Captain America: Sentinel of Liberty: The shield is one of the most iconic images in the world. It stands for hope, justice, and the protection of the innocent. It also holds a secret, undiscovered until now, that will change the way Steve Rogers views the 20th century and how he chooses to fight in the 21st.

Nothing is what it appears.

BORN ON THE FOURTH OF JULY

Our mystery begins in 1941, at a place called The Forge, where we see the creation of Captain America’s indestructible shield (and not the same origin that we’ve seen before). Cut to the 21st century, where a 104-year-old Steve Rogers returns to the Lower East Side to rent an apartment… the same apartment he lived in as a boy. It’s a nice little touch, albeit a little sentimental, and we see Steve trying to fit in with the locals. He even starts taking classes at the local community college to freshen up his rusty drawing skills, but things get wacky when he and his ham radio pals encounter a strange numbers station. When they decode the mathematical message, they find an image of three concentric circles with a star in the middle: Steve’s shield! As the fourth of July dawns, Steve and the Winter Soldier provide unofficial security for New York’s festivities, only to run afoul of a new Destroyer with an unexpected plan.

On the one hand, I do like seeing Steve Rogers return to New York as a normal man for what feels like the first time in years. But this issue features him remembering his memories, teaching bullied kids to fight, bonding with the locals, and generally glossing over a lot of details to get us to a point where Captain America is just a reg’lar feller in a run-down neighborhood. The action sequences are well-drawn, especially an epic rebound by Captain America off of a parade float of his shield, but that also brings up the biggest problem with the story: a LOT of coincidence. Captain America just happens to be talking to Roger Aubrey, a previous Destroyer, when a new one shows up. Something strange is happening involving the shield, and Bucky seems to be in on it. Captain America’s childhood apartment just happens to be available for rent and so it goes. Much of the plot treats the events of 1941 as if they just happened, which stretches my credulity a little more than I would have liked.

BOTTOM LINE: WHAT IS THE CENTURY GAME?

Even with that caveat, Captain America: Sentinel of Liberty #1 presents an interesting piece of Rogers’ history, constructs the beginnings of a mystery, and offers us some low-key Cap drama to establish a new status quo, earning 3.5 out of 5 stars overall. Even though I have my reservations about the finer points of the execution, this is a solid first issue that gives us a whole new Cap that reminds me of the Bronze Age take in all the best ways.

A couple of contrived plot points make the story feel less authentic, but the art is cool and the premise seems to have staying power, so I'm willing to see where this is all going.