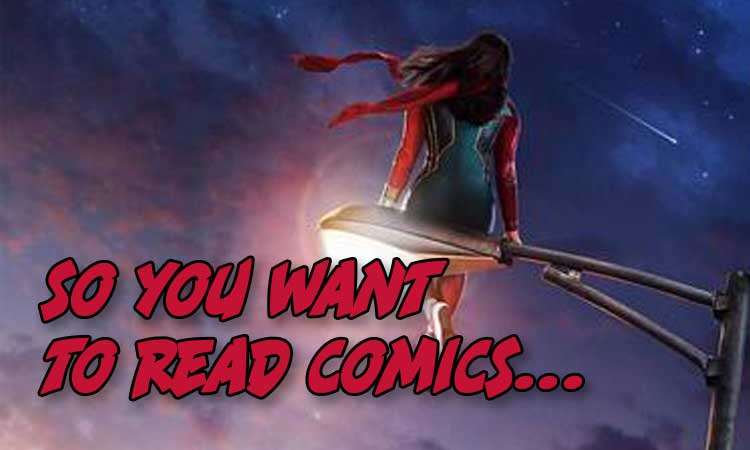 So You Want To Read Comics: Ms. Marvel Edition

The future starts with this week’s “So You Want To Read Comics”.  This is our weekly feature where we take a look at a single topic or genre and then give you two comic book recommendations, perfect for new readers, based on that topic or genre.  This week we’re taking a closer look at the newest Marvel/Disney+ show, Ms. Marvel.

Created by G. Willow Wilson and making her comic book debut in February of 2014, the latest incarnation of Ms. Marvel, Kamala Khan, took the comic book reading community and industry by storm. Kamala found great success among both teenage and adult readers, especially those who had been seeking more diversity and representation in the comic book industry.  What separated Ms. Marvel from other young characters is that her stories had a distinctly millennial/gen z spin.  These early tales often dealt with generational traumas, breaking cycles, and the tension between elder generations and the younger ones.  Also, Kamala’s ethnicity and religion were treated with respect and not as a character gimmick or cheap marketing ploy.  The character has been so popular that she is now headlining her own Disney+ series which premiered June 8th, 2022 (which means I don’t have to stretch to recommend her comics this time).

So, for those who’ve seen the show and wondering where you can get more of this character, check out these two recommendations.

If you’re going take the dive and start reading Ms. Marvel comics, you might as well start at the beginning. Here we see how Kamala gets her powers and how she handles the first few days of being a superhero. Also in this volume, readers are introduced to all the major players in Kamala Khan’s life.  From her friends, to her family, it even sets up a nemesis of sorts.  Most importantly though, it establishes a tone for Ms. Marvel that has followed her and defined her character all the way to the characterization used in her TV show.  It also establishes Kamala as a fan of superheroes from the outside who is then thrust into that world.  Which means as a reader, you get to be introduced to the Marvel Universe right along with Ms. Marvel.

While this isn’t only a Ms. Marvel story, she does play a prominent role in this.  Here we see that after a tragic event, there’s a much harsher scrutiny on teenage vigilantes, going so far as to make them illegal.  But, it might be that not everyone involved with this has the kids’ best interest in mind.  While Ms. Marvel stories have never really shied away from social issues, or discussions about generational conflict, this storyline really puts this in the spotlight, specifically the mixed messaging that often gets thrown at teens about doing more to make things better and staying out of “grown up” matters. It also touches on how inadvertently damaging some of the efforts to protect children can be, There’s a lot of characters in this storyline, but most of them get some sort of introduction so it shouldn’t be too confusing for a new reader.

What did you think of these suggestions?  Are you watching the show? Let us know in the comments section below.