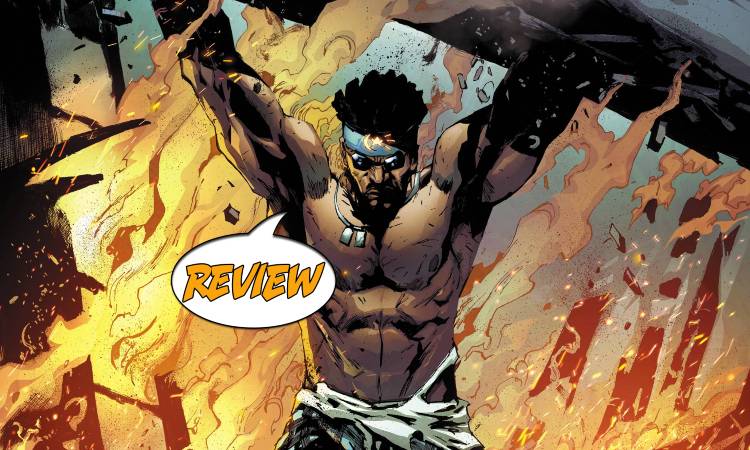 There’s a new power structure on Paris Island, and no one’s happy about who is at the top. Your Major Spoilers review of Blood Syndicate: Season One #2 from Milestone Comics awaits!

Previously in Blood Syndicate: Season One: The leader of one of Paris Island’s most powerful gangs needs to add some soldiers to his army… and has his sights set on Wise Son! The heroes might’ve “cleaned up” the streets, but in the shadows there’s utter chaos as rival gangs battle for control. Wise could have a seat at the table, but he’s been out of the game for so long… does he want back in?

After the drive-by that ended last issue, Rolando/Tech-9 and his old friend Carlos/Fade have hidden out in the sewers beneath the city, where Fade explains the changes that have taken place while his friend was out of the country. Icon and Rocket aren’t the only super-powered folks in town, as Fade reveals his intangibility powers. Elsewhere, Hannibal White returns home to his ultra-religious father to explain how he has converted to Islam while stationed. Papa White takes the news badly, shouting that his son is still hellbound for his sins, only to have Hannibal lash out at the old man and walk away. Immediately, he is approached by his friends from his days with the Blue Street Syndicate, agreeing to go to a meeting with the gang.

That’s when Holocaust arrives… and the whole building explodes.

Much like the Hardware: Season One miniseries, my big frustration with this comic is the pacing. The first issue of Blood Syndicate back in the day started with nine super gang members, working backwards from a point where they were already trying to solidify their control of the streets. After spending the last issue with Rolando, we spend issue two with Hannibal, ending with a big dramatic moment but still only having introduced a fraction of the characters. Is it a better story? You could make the argument that focusing on the triad of Tech, Wise Son, and Holocaust sets up the central conflict without a lot of complications from other characters, but I also feel the absence of Third Rail, Brick House, and the others. The art in this issue is quite good, though it doesn’t feel as detailed as the last issue. The explosion sequence is really well-rendered, and I have to admit all the vehicles look great, but there are a few transitional sequences that puzzle me throughout the issue.

BOTTOM LINE: SLOWER THAN I WOULD HAVE LIKED

All told, Blood Syndicate: Season One #2 is a fine enough story, but the pacing is very slow and deliberate for a six-issue limited series, making me worry that we won’t get more of the Earth-M books because the audiences gave up, with art that is experimental and attractive, earning 3 out of 5 stars overall. I’m not sure what the end game here is, but if we’re actually going to get a gang together by issue six, we need to introduce more members.

This issue focuses almost entirely on Hannibal White's return from the Army and the deconstruction fatigue is real. I enjoy the art, though.