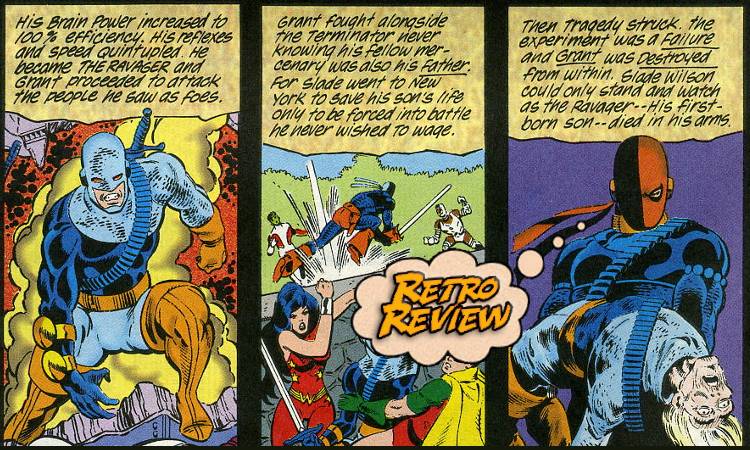 He’s a stone-cold killer in a really great costume, but for some reason, people keep trying to play him off as a hero. Your Major Spoilers Retro Review of Deathstroke The Terminator #1 awaits!

Previously in Deathstroke The Terminator: Thirty-one years ago tomorrow (as of this writing, anyway), the greatest villain the Teen Titans ever faced got his own solo series. When readers first encountered him, Slade Wilson was rejecting a contract from The H.I.V.E. to destroy the New Teen Titans. Sadly for him, the person who took that contract turned out to be his oldest son, and the H.I.V.E. super-powers the boy was given killed him. The Terminator (as he was primarily known in those pre- Schwarzenegger-blockbuster days of 1980) crossed swords with the Titans several more times, even successfully placing a traitor among their number in the form of his underage girlfriend, Terra. That relationship had improved by 1991, when this issue was published, to the point where Slade/Deathstroke/Terminator was actually an uneasy ally of the teen team after he and Changeling finally shared the truth of Terra’s duplicity and madness. While the Titans were being hunted by the Wildebeest Society (a story still in progress at the time this issue hit the stands), Deathstroke was one of their major allies, for reasons that will be even more intriguing by the time we’re done here. This issue begins with Adeline Kane, Slade Wilson’s ex-wife and the mother of his dead son Ravager, being attacked by unknown foes. While Adeline is left for dead in the mountains, Slade himself is busy in the veldt, tracking a rogue elephant that has been attacking human settlements. Steve Erwin (not the late crocodile hunter, but the co-creator of Checkmate) makes some interesting visuals out of the idea of a man stalking a massive pachyderm, but it’s not a moment that has aged well, at least for this reader. After shooting the beast and gifting the carcass to the people it attacked (he makes a point of saying that they can eat the meat and sell the ivory, which also hasn’t aged particularly well), he returns to his home, where his manservant Wintergreen gives him the news about Adeline. Slade immediately prepares to head home.

He doesn’t count on his ex’s attackers returning to target him as well. His attacker mocks him repeatedly, destroying his ride, his home, and implying that he knows the Terminator from the old days, triggering the flashback. (Readers of ’80s Teen Titans will be familiar with most of the memories, as writer Wolfman previously used the same sequences during the pages of The Judas Contract, while New 52 fans will remember them from Rob Liefeld’s Deathstroke relaunch in 2011.) Walking thirty-plus miles across Africa, Deathstroke catches a plane back to Europe, where he visits his former wife’s bedside and remembers his origins and the mission that led to the death of his son, Grant the Ravager. Wintergreen worries that his boss is too personally involved, especially after his work with the New Titans in recent months, but Slade is fixated on what could have gotten Addie attacked. Finding the woman who paid for the hit, he is confused to find that she thinks she staged the attack on Slade’s own orders.

It turns out that she was confusing him with ANOTHER blue-and-orange masked mercenary with an illegal arsenal strapped on his back. Of course, we all know that The Ravager is Slade’s son and that he is dead! How can this be? It’s actually a really complicated swerve, involving Slade’s other son, Joseph, and an international terrorist called The Jackal. Deathstroke The Terminator #1 is an interesting start to a series wherein Marv refuses to let Slade Wilson be anything like a hero, but still manages to make him a strong protagonist while Erwin delivers really strong art, especially for an era where art style went off the rails a bit, earning 3.5 out of 5 stars overall. Later creators would try to have Deathstroke pull off a full-face turn, but as Dark Crisis #1 showed us this week, those efforts don’t usually last very long.

Marv Wolfman never allows Slade to be anything more than a conflicted, murderous jerk, and it works very well here, thanks in part to Erwin's detailed art.