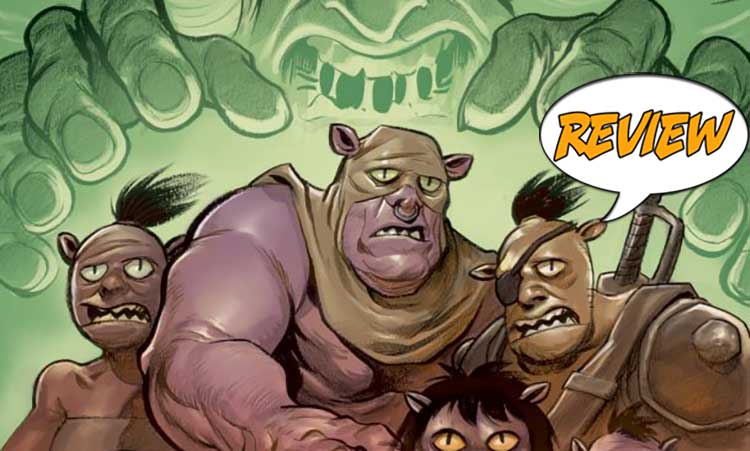 An Orc dance party is interrupted by an evil wizard hoping to use them as his evil army. When they turn him down, the wizard decides to exact his revenge! What will happen to the Orc tribe? Find out in Orcs! The Curse #1 from BOOM! Studios.

Previously in Orcs! After an unfortunate prank with an acorn, Bog and his crew (Zep, Pez, Utzu, and Gurh) are banished from their village. They venture out on their own facing down squirrels, gnomes, trolls, and more as they seek their fortune and hope to find their way back home again.

IT’S ALL FUN AND GAMES UNTIL THE WIZARD ARRIVES

Orcs! The Curse #1 opens with a wizard saying it’s time to summon all malevolent creatures. Clearly, he is up to no good. Two servants close at hand, who look like they were originally crows, offer to help, but they aren’t what the wizard is looking for.

Meanwhile, the Orcs are having a dance party. Pez challenges Bog to a dance off. Granny arrives, wondering what is going on. She declares that whatever it is they’re doing is not dancing. As she prepares to show them what real dancing is, there is an explosion, and the wizard arrives with his crow people and announces that he is summoning the Orcs to join his army.

Some of the Orcs laugh at him. The Chief tries to get him to clarify and finally understands that the wizard wants to hire them. That isn’t actually what the wizard wants, but the Chief pulls out a standard mercenary contract. They’ve had experience with evil wizards before and have learned their lesson. They want fair wages. The wizards gets angry and fires up his staff, but Granny touches it with her stick and the magic goes out. The Orcs move to attack him, but the wizard throws Jax, one of his crow servants, at them as a distraction and then flees.

Back at his Obsidian Tower, the wizard plans his next move. Jax offers to fight for him, but the wizard says the crows are not good enough. Jax’s sister, Carn, is getting restless working for the wizard. She thinks the crows should be independent. Jax remembers what happened before when a crow challenged the wizard. Then the wizard summons all his crows. He changed them into talking, more humanoid creatures before. Now he casts another spell and transforms them into something more dreadful.

But a few crows are still in the rookery, including Carn, busy with other things such as their children. They belatedly go to the courtyard where the rest of their people went and find only the monstrous creature make from the Crows. The wizard orders it to destroy the Orcs.

The few remaining crows flee with their babies and eggs. They go to the Orcs to warn them about what is coming, but also to ask if their witch (Granny, in other words) could help the save their people. This may be more difficult than it sounds. The crows have been transformed once already and their kin have been transformed again. Granny asks for four feathers and the Orcs prepare for battle.

When the wizard arrives with the creature, the orcs are ready and there is a bunch of fighting while they try to restrain the creature. Granny has made a spell and plans to catapult it into the monster. Carn wants to be sure it will turn her people back and Granny admits she is not sure. She has done the best she can, but she has never made a spell like this. Carn’s concern delays them, and the monster destroys the catapult.

The only way the spell will work is if it is dropped from above. Carn makes her decision. She and her friend Mori take the spell and fly it above the monster. They manage to deliver the spell – but what will happen to their people?

The art of Orcs! The Curse #1 is energetic and fun. The Orcs tend to have big, toothy grins and wild hair. With their bulbous noses and chunky, muscular bodies, they aren’t going to win any classic beauty pageants, but they sure do look like they know how to have fun. And in fact, when the wizard arrives and imperiously announces that they are his army, the Orcs cannot restrain their reaction. They laugh at him. I love the way the Orc Chief stops him and smugly pulls out the contract, which is a humorously large stack of paper.

The crows are remarkably expressive. While we first see them merely as the wizard’s flunkies, later we do get to see that they are more complicated than that. They have made a deal with the wizard to get advanced thought and speech. Jax is afraid of what the wizard could do to them, so he tends to be meeker. Carn realizes they have surrendered their independence, and wonders whether the trade-off was worth it. Their eyes communicate their respective fear and determination.

Orcs! The Curse #1 is an engaging read. It is a double sized issue, so you get a lot of story for the price. There’s a nice balance of humor and drama here, and it is a book younger readers can enjoy.

Bog and friends are back as an evil wizard confronts them and doesn’t get the reaction he expected!