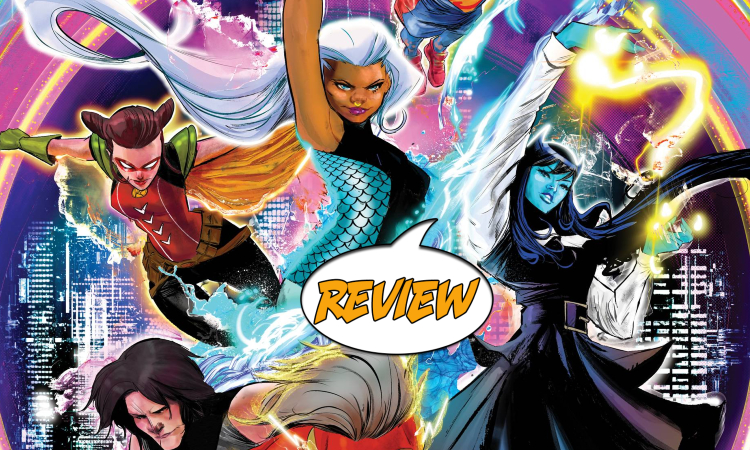 Previously in Teen Justice: What is Sister Blood’s true mission among the lost souls of New York City? Can Teen Justice get through their growing pains fast enough to learn the answer in time to stop it? And what role will the mysterious Raven (the brooding hero who has refused to join the team in the past) play in the ultimate battle?

THE NEW KID IN TOWN

A young woman named Gigi (or, at least, that’s what she’s telling everyone) steps off a bus from no place into the middle of Metropolis… and a super-hero fight. The kids of Teen Justice are going head-to-head with agents of The H.I.V.E., and Gigi is nearly collateral damage. Fortunately, Kid Quick’s name isn’t just a boast, allowing them to save Gigi and even get her to her destination ahead of schedule. While the heroes try to figure out what H.I.V.E. was after (it has something to do with a Doctor Stone, whose daughter Victoria is apparently not yet a cyborg), Gigi gets set up with her own room… in the Church of Blood! Supergirl and Robin end up going rogue and clashing with Thunder and Lightning, much to team leader Aquagirl’s chagrin, which causes friction among all the heroes. Oh, and whatever Sister Blood is up to can’t be good, because when she takes off her scarlet robes, she reveals the scarlet SKIN of… Sinestra!

FEMME KILOWOG IS… SOMETHING

The twist that Sinestra (with her partner Kilowog, who is disturbing with a full head of long hair) is actually Sister Blood is a welcome one, as I spent much of the issue reverse-engineering who is whom based on Earth-0. There are some fun alters (Klarienne the Witch Girl, Wondrous Man’s sidekick Troy, and Supergirl Laurel Kent) and some not-so (Robin Talia Kane and whatever is up with Aquagirl), and the appearance of femme Thunder and Lightning brought back nostalgic memories for me. The art, however, is not to my liking, giving us overly stylized proportions and facial expressions that don’t read as human. Robin is especially alien-looking, with her bulbous head, tiny neck and limbs, and massive unusual braids making for an off-putting silhouette. It’s absolutely intentional, too, as Gigi is perfectly human in her presentation, making the comparison even more disturbing. Kid Quick is really the star of this issue, as they not only work in the unusual style (thanks to their super-speed powers) but newcomer Raven looks pretty good as well.

Though the art remains my biggest complaint about Multiversity: Teen Justice #1, the story suffers from a lack of context on many of the characters, making it a little hard to get engaged in the story, but even with those issues, it’s a better-than-average first issue that earns 3 out of 5 stars overall. I’ll definitely be back next time to see where this goes next, thanks to the Troy/Raven romance and Klarienne, with the hope that more time spent with the characters will deepen the reading experience.

I like the Multiversity trade dress and would love to see more like this, but being thrown into a New Teen Titans story without the context makes for a lot of heavy lifting on the part of the writer.