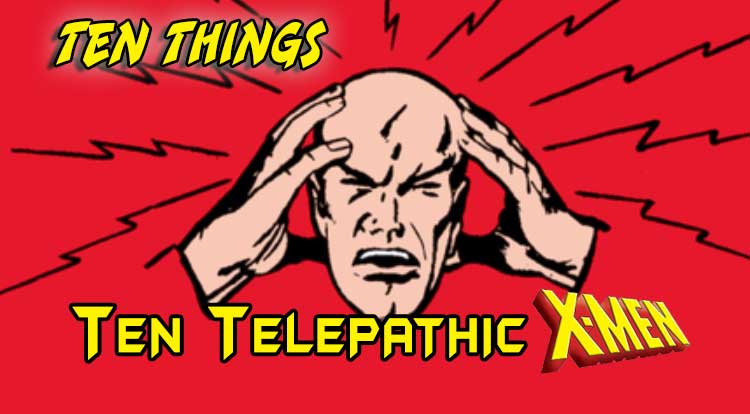 There are a LOT of X-Men who can tell you what you’re thinking, and not all of them are related to Jean Grey. Most of them, but not ALL of them. Welcome to Ten Things: Ten Telepathic X-Men!
Whooshman-Bicarbonate Films, in conjunction with An Amateur Comics Historian and Dr. Charles Frances Xavier, Presents: Initially introduced as a powerful telekinetic, Jean Grey later discovered that a traumatic experience in her childhood had caused Professor X to block her powerful telepathic powers until she was mature enough to comprehend the things in other people’s minds. Over the years, Marvel Girl swapped back and forth between only telekinetic, only telepathic, both telekinetic AND telepathic, and “so powerful she ate a whole planet of asparagus people.” Some of those have been retconned as actually being a duplicate version of Jean created from a cosmic Phoenix Force, but Jean explicitly possesses all the memories of those events as having happened to her, so it’s sort of a wash.

Regardless, though Charles Xavier was the team’s mind-reader first, Jean is the first field X-Man to have telepathic powers. With a back story nearly as complicated as Ms. Grey, Elizabeth “Betsy” Braddock is a half-alien mutant whose twin brother was chosen to be the living symbol of Great Britain. After having her eyes ripped out, she got cybernetic peepers, joined the X-Men, dated a sixteen-year-old, got body-swapped with a Japanese ninja named Kwannon, died a few times and got a face tattoo that came with the magical powers of the Crimson Dawn. Currently in her third run as Captain Britain, Betsy powers are still primarily telepathic, often focused on the psychic knife seen above, which she will tell you incessantly is “the focused totality of [her]psychic powers!”

An X-Man whose lot makes me sadder than I expected, Sage (real name unrevealed) was a young teen when she encountered Professor Charles Xavier immediately after the accident that left him partially paralyzed. After helping him escape from Europe, Sage became one of his first students, but rather than put on pajamas and punch Magneto, she put on fetish gear to serve as Xavier’s personal spy inside the Hellfire Club. For years, “Tessa” was the Black King’s majordomo, eventually parting ways with her former boss and joining the X-Men proper. Much of her early time with the team used only her computer-like mind and genius intellect, but eventually she began using her telepathic powers as well. As of this writing, Sage works with Cypher maintaining the Krakoan gateway network that allows the X-Men to teleport all over the world and the planet Mars. An angry young man, Quintavius “Quentin” Quirinius Quire was something of an enigma when he first appeared, eventually becoming the leader of the Omega Gang, a group of militant mutants who seemingly sought only anarchy. After a series of disasters and the team’s split into factions led by Wolverine and Cyclops, Quire became a student at Wolverine’s Jean Grey School for Higher Learning, where his telepathic abilities made him a target for the cosmic Phoenix Force. With vast telepathic and telekinetic powers, Kid Omega has been noted not only as an Omega-Level Mutant, but a Psionic of the Highest Order.

Nobody knows what either of those things mean, but the pink mohawk makes up for a multitude of sins. A native of Earth-298, the reality known as The Age of Apocalypse, Nathaniel Grey was genetically engineered by Mister Sinister from the genetic material of Cyclops and Jean Grey. When that splinter reality collapsed, Nate and his worst enemy were shunted back into the mainstream Earth-616 reality, where he found himself alienated, yet still courted by mutants good and evil. Ostensibly a telepath and telekinetic, X-Man was designed to be “the most powerful psionic imaginable”, which is kind of a tall order. While seeking to find himself, he went barefoot as a mutant shaman for a few years, died for a while, then created a different alternate reality of his own in the hopes of finally finding a place where he belongs. If you ever wanted living proof that mutant powers are a bizarre lottery, witness Brian Cruz. Tag’s power was to designate someone as “It”, telepathically compelling everyone in a 100-foot-radius to run towards or away from them. It’s an odd power, but he used it in interesting ways, at least once designated himself as It, and forcing an attacker to flee him. A member of the Hellions Squad at the Xavier Academy, Tag lost his powers on M-Day (thanks to the magical manipulations of an insane Scarlet Witch) and was killed by the mutant-hating Purifiers in a rocket attack. Like all X-Men, the Krakoan era has shown that he got better, though he has yet to be much of a focus. Like Nathaniel Grey, Nathaniel Christopher Charles Summers was targeted by Mister Sinister due to the unexpected power of a hybrid of jean Grey and Cyclops genetic material. Unlike his alternate reality self, Cable wasn’t genetically engineered by Sinister, instead being born of Cyclops and Jean’s clone, Madelyne Summers. Shunted to a dystopian alternate future, he was raised as a member of the Askani tribe to adulthood, then transported back into his natural timestream years before his own birth. Though powerful in both telepathy and telekinesis, Cable spent most of his adulthood using his psionic might to keep a strange alien virus from turning his body entirely to techno-organic machinery. He, too, has died a time or three, burned out his telepathic powers, and has currently been resurrected in a younger body that allows him to interact with his biological dad without being two decades older. The King of Atlantis, some people forget (or, perhaps, would like to forget) that Namor McKenzie was ever a member of the X-Men. A hybrid of Atlantean and human DNA, Namor’s mutant status actually comes from his ability to fly, a power that he believes is due to the tiny wings on his ankles. But even more people forget that, in his decades of existence, Namor has had a number of powers that come and go, including electrokinesis, control of the elements, aquakinesis and telepathic control of sea life. The primary reason this power has been downplayed in recent years is that it’s become the primary super ability of Aquaman, a character explicitly designed as DC Comics’ answer to the Sub-Mariner.

Of course, Namor himself was created to be Atlas/Marvel Comics’ take on Superman, so that’s kind of a wash. The OTHER other child of Cyclops and Jean Grey, Rachel Summers ((AKA Rachel Grey AKA Rachel Grey-Summers, depending on whether or not she’s mad at her dad) hails from the future reality of Earth-811. The first of the future children to arrive in the mainstream reality, Rachel had to deal with her mother’s death at a time when she was still being blamed for mass murder and chaos. Rachel even bonded with the alien Phoenix Force herself, learning the truth of her late mom’s situation. Rachel has used and lost her mother’s Marvel Girl codename as well, but has most recently been using her massive psionic powers under the codename of Prestige. Created as a sort of evil Jean Grey, Emma Frost quickly ran afoul of The Phoenix and was left comatose by an even-more-eviler Jean Grey. After Jean’s death, she returned as the head of the Massachusetts Academy as an evil Professor X, then joined the X-Men as an evil… um… herself? Since her turn to the side of (mostly) good during the Grant Morrison era, Frost has gotten much more character depth and a lot of Freudian explanations for her bad behavior, but she’s still the woman who wiped away all a man’s memories of his mother in a fit of pique and punished another by installing a telepathic urge to vomit every time he saw breasts… then flashed him. She may be on the side of good, but she’ll always be a little bit bad.

Once again, this week’s topic, Ten Telepathic X-Men, is all me, but feel free to follow along @MightyKingCobra to suggest a topic of your own! There’s always more Ten Things madness on my Twitter or check out the full Twitter archive here! As with any set of like items, these aren’t meant to be hard and fast or absolutely complete, if only because BLAH. Either way, the comments section is below for just such an emergency, but, as always: Please, no wagering!