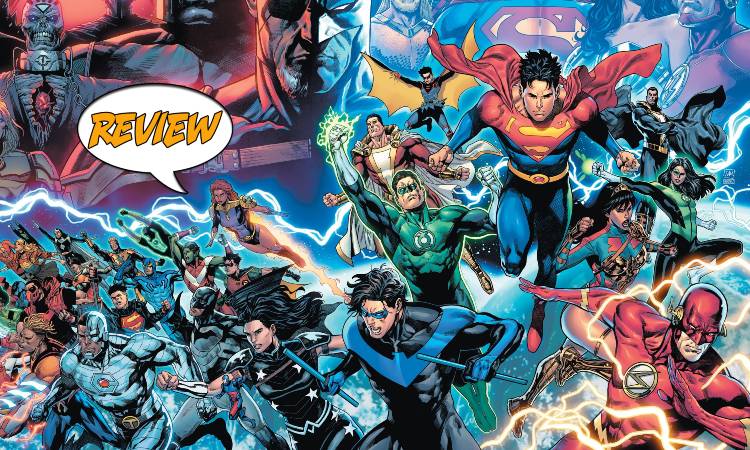 With the Justice League gone, the forces of evil are making big moves. Can the remaining heroes stand against the Great Darkness? Your Major Spoilers review of Dark Crisis #1 from DC Comics awaits!

Previously in Dark Crisis: Superman, Batman, Wonder Woman, and the rest of the Justice League are dead. The remaining heroes are left to protect the world from an onslaught of violent attacks by DC’s greatest villains! Can the legacy heroes step out of the shadows of the classic heroes to form a new Justice League?

And will that be enough to stop a darkness greater than anything they’ve ever faced from destroying everything?

This issue opens with a vigil/funeral, as Nightwing gives the eulogy for the fallen members of the Justice League. The heroes of the DCU haven’t got a lot of time to mourn, though, as the Kobra Cult attacks, part of an ongoing series of chaotic moves by villains around the world. Black Adam relays the news of the demises of Superman, Wonder Woman, and company, just in time for Green Lantern Hal Jordan to arrive and… just be a jerk. He angrily claims Black Adam is lying (which I understand), attacks Superman Jon Kent for trying to put together a new League (which is less so), and snarls that Flash Wally West has to go into the multiverse to find Barry Allen. Wally assembles his multiversal team, while Superman gathers a new Justice League (himself, Doctor Light, Blue Beetle Ted Kord, Blue Beetle Jaime Reyes, Booster Gold, Harley Quinn, Supergirl, Robin, Frost, Aquaman Jackson Hyde, and Frankenstein) but Black Adam declines membership, calling them “foolish children.”

Speaking of children, Deathstroke has assembled a new Secret Society with one goal: Kill everyone who has ever been a Titan, starting with the children of Titans Academy.

This issue also reveals that Pariah is doing something with the energies of the ten “dead” Justice Leaguers that he believes will allow him to murder the entire Multiverse. It’s a shocking ending, made even more so by Deathstroke nonchalantly murdering a founding New Teen Titan with a bullet to the head, but this issue is mostly setting the scene for what is to come. After reading Justice League #75, Justice League: Road To Dark Crisis, and Dark Crisis #0, I feel like a lot of this comes as review for me, but I appreciate the attempt by Williamson to make sure that everything is in the text for those who haven’t had the chance to read all those stories. Sampere’s art is quite good (he does the best Yara Flor costume I’ve seen to date), but I find some of the coloring to be overwhelming for his linework, especially when Jon Kent arrives to try and recruit Luke Fox. Also, did you know that Luke Fox’s adventures in The Next Batman were in DCU canon? ‘Cause I didn’t. The final pages, though, are quite impressive, as the villain army overruns Titans Tower and Pariah works his weird death magic in the shadows of a devastated Multiverse-2, so Daniel is a good choice for this series.

All in all, though, Dark Crisis #1 is a better-than-average first issue of a Crisis storyline, ranking below Crisis on Infinite Earths #1’s earth-shattering madness but well above whatever the heck was going on in Final Crisis #1, with strong art and a story that is taking its time to hit all the important points before going full bore into the crazy, earning 3.5 out of 5 stars overall. I personally think that there’s nothing wrong with Jon Kent’s Justice League that hasn’t been wrong with half a dozen other lineups, but at least they didn’t give command to Green Lantern.

That would have been a disaster.

We're STILL in setup mode, but the events in this issue are simultaneously disheartening and exciting.