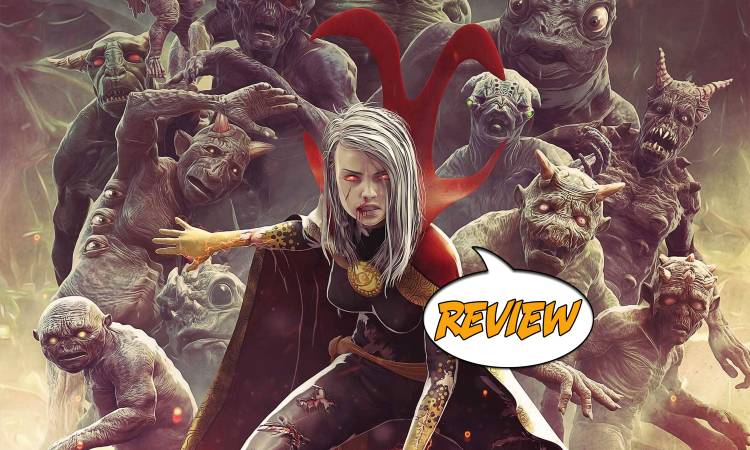 The mysterious Blasphemy Cartel intends to make the world hell for the living. The new Sorcerer Supreme is going to have to put her foot down… on their faces. Your Major Spoilers review of Strange #3 from Marvel Comics awaits!

Previously in Strange: Someone is preying on the misery and suffering of New York’s citizens. Clea Strange is all too familiar with the demons and monsters that stalk humans. But what happens when it’s the humans who are hunting the monsters?

After last issue’s battle with the risen corpse of Thunderstrike and the warning from new player The Harvestman, Clea Strange is irritated. With the Blasphemy Cartel bringing the modus operandi of organized crime to matters mystical, the Sorcerer Supreme decides to cut out the middleman and take her questions to another gangster: The Rose. As is his nature, Rose tries to play power games with her, but Clea takes the opportunity to remind him what real power is. With his intel, Strange is able to find the Blasphemy Cartel, who lead her into an ambush, negating all magic for a full three minutes and opening fire with fully automatic weaponry. It’s a literal meatgrinder of bullets, with no magic to save her life.

No Earth magic, anyway. As a daughter of the Dark Dimension, Clea has more than one Sorcerer Supreme mantle to draw upon, and wiping out the entire cell of magic gangsters in a show of power. Then, at the worst possible moment, her mother calls and tells her she’s coming to dinner.

CLEA STRANGE ISN’T HAPPY ABOUT IT

Much like Ghost Rider’s new take, this is a whole new Sorcerer Supreme, one who is arguably more powerful than her deceased predecessor/husband. After the first two issues worth of being ambushed, it’s good to see Clea taking matters into her own hands this issue and I really enjoy seeing her reminding people that she’s NOT Stephen Strange. This issue’s reveal of the man behind the Cartel is suitably shocking, with his promises to leave a smoking crater of the Sanctum Sanctorum and put Strange’s head on a stick, but I’m really sort of fine with that. As this issue’s story shows, she’s also a much more unforgiving top mage, and the art reminds us wonderfully of that fact. The full-page reveal of an enraged Strange, bearing the head-flames that are her family’s birthright, having stopped thousands of bullets is both cheer-worthy and chilling. Better than that, the Blasphemy Cartel’s equipment and uniforms remind me of an arcane version of G.I. Joe’s COBRA, a detail that is both entertaining and creatively unexpected.

After the first pass through this comic, I went back to get issues one and two. That should tell you everything you need to know about Strange #3, a book that has inventive and engaging art working in concert with a story that takes the Sorcerer Supreme to new territory and uses the main character to great effect, earning 4 out of 5 stars overall. The overarching plot point that Clea is ready to resurrect Stephen points to long-term storytelling plans and, based on this issue, I hope to see them all play out.

Clea has to face foes who merge the mystical and the mechanical and it makes for an exciting new wrinkle in the sage of the Sorcerer Supreme.