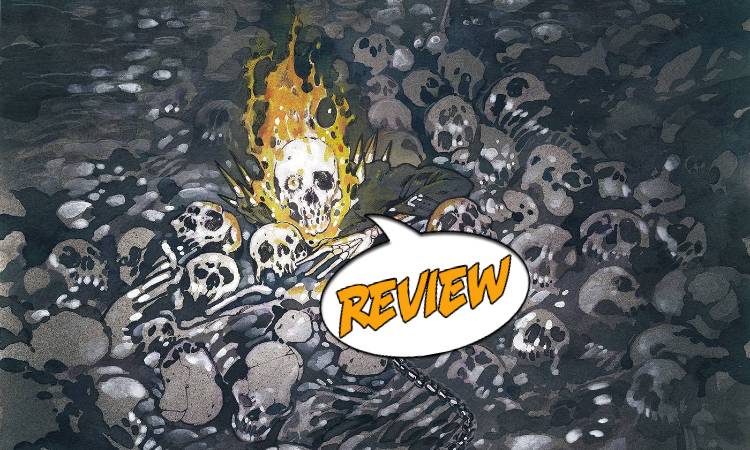 When innocent blood is spilled, vengeance is called for, and so is Johnny Blaze. Your Major Spoilers review of Ghost Rider #3 from Marvel Comics awaits!

Previously in Ghost Rider: Johnny Blaze needs to know the truth behind what happened to him in Hayden Falls. But not only does he have an FBI agent tailing him, there are supernatural forces at work that want to see him off the road again, including a nightmarish trucker who stains the roads with burned rubber and roadkill.

“THE SPIRIT OF VENGEANCE HAS BEEN USING ME.”

After awakening in the proverbial strange little town, Johnny Blaze has once again taken to the road (in celebration, presumably, of his 50th anniversary). After encountering a human-eating demon last month, he’s hitch-hiking his way to nowhere, investigating rumors of occult sites. That’s what has brought him to Oregon, to the legendary Red Road, a stretch of highway so deadly that it seems to have a life of its own and a nickname drawn from the common sight of blood smeared on the asphalt. On his trail are not only a legendary coterie of magic users, but special agents of the U.S. Government Wilmer and Warroad, a Felix-and-Oscar teaming of a young goth woman and the proverbial empty suit. Johnny hitches a ride with a friendly soul who turns out to not be either before encountering The Hell Truck, at which point his memory blanks out. Ghost Rider takes over, and leaves him with only vague memories of the carnage that ensues and a quiet voice in his head (literally), intoning “The Shadow Country.”

So, there are a lot of questions that I still have about this Ghost Rider series three issues in. With Johnny last being seen as a ruler in hell, the hows and whys of how he got to Hayden Falls, but that’s at least baked into the premise. The bigger question for me is whether or not this is in any way related to what has come before, since it feels more like we’ve suddenly switched focus to Earth-1. The story itself isn’t half-bad, though it seems to be inspired by the cover of Ghost Rider Volume 2 #51, an artifact of Johnny’s first time walking the earth and having adventures. Like the last issue, this story is heavily focused on presenting a feeling of dread and suspense, which it does well. Unfortunately, this comes at the expense of the story, which feels like a bunch of things that just happen. Johnny’s helpful ride turns out to be a serial killer, a truckload of hogs explodes across the road, a hellish truck shows up… Johnny’s inability to remember what happened makes it all feel even more remote, even with the strengths of the art. Moments like Johnny’s flesh melting away to reveal Ghost Rider are excellent, and even though I’m not a fan of the “chains flying around” design of this incarnation, it mostly looks pretty good.

BOTTOM LINE: AT ONCE FAMILIAR AND TERRIFYING

There are a few issues with the art in Ghost Rider #3, with occasional clarity issues (like what happened to Agent Warroad’s car) confusing me even as moments like the last-page reveal of more goings-on with Blaze’s head hit like the proverbial ton of bricks, leaving this issue with a still better-than-average 3 out of 5 stars overall. I’m not sure if this new ongoing is going to be the game-changer that the 1973 and 1990 volumes were, but it’s at least willing to dig up some new ground, pun fully intended.

Feels like we're rebooting to old-school '70s Ghost Rider, but the execution doesn't quite gel with the intent.