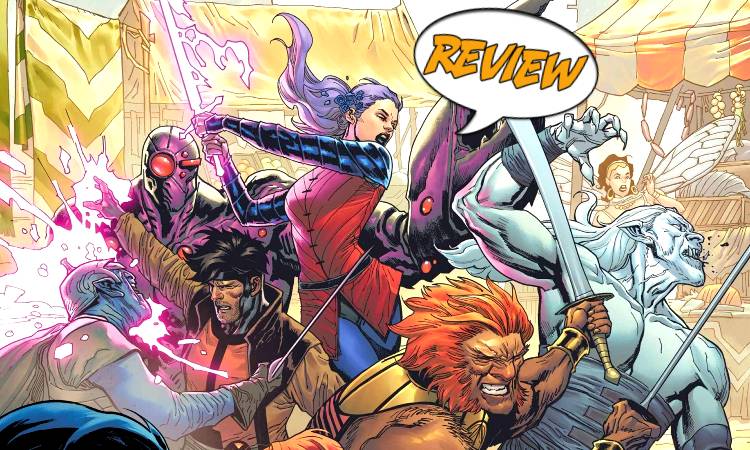 The search for the Siege Perilous puts the Knights in the path of Merlyn himself. And where Merlyn goes, the Furies follow. Your Major Spoilers review of Knights of X #2 from Marvel Comics awaits!

Previously in Knights of X: Betsy Braddock has assembled her Knights of X! Their mission: to save Otherworld from Merlyn and his powerful henchmen…by finding the holy grail of mutantkind. But Otherworld is vast, and innumerable armies stand in their way. When Merlyn targets the Crooked Market, a safe haven for mutantkind, the Knights must split up. Will Captain Britain find the grail?

THE SEARCH FOR THE SIEGE PERILOUS

As Knights of X #2 opens, Merlyn rages against the representatives of the districts of Otherworld in his Lunatic Citadel, deciding to put the blame for recent madness on Mad Jim Jaspers. In his defense, I mean, it’s right in the name. Worrying about the mutant presence is just the tip of the iceberg, though, as the “witchbreed” have a terrible time throughout the realm, and Captain Britain feels obligated to fight for the mutant cause while seeking out the Siege Perilous. (You may remember that mystic artifact from the time that she and the X-Men traveled through it to be dead in Australia for a while.) It’s all action from there, with the assembled Knights going into battle against an army of Furies, with Mordred puzzled by the future, Shatterstar embracing combat, vampires in the wings, and Jaspers in danger.

Of course, the one question I have is, “Why are we working so hard to save a maniac like Jaspers?” Not only that, why are King Arthur and Merlyn the villains of the piece? I read (and reviewed!) the last issue and still felt absolutely at sea during the events of this issue. There are lovely character moments all around, between Gambit and Meggan, Betsy and Rachel, Rictor and Shatterstar, and even a telepathic conversation between Otherworld and Krakoa with Mr. Sinister playing his overt passive-aggressive mind games in the background. Quinn’s art is interesting throughout the issue, but oddly elongated faces and proportions make for some less-than-successful moments, and the presence of a near-identical alternate version of Betsy Braddock is confusing (and never addressed during the issue).

Whether it’s some sort of “Second Issue Syndrome” or just the result of a lot of information to cover in a short page count, Knights of X #2 comes like a drink from the firehose, where you’re happy to get a nice drink of water but you wish it might come at a lower velocity, with better-than-average art and a story that I hope doesn’t have this kind of pacing all the way through, earning 3 out of 5 stars overall. I will be sticking around for the rest of this arc, but if there’s this much heavy lifting in every issue, I might not keep going after that.

This issue features nine resurrected mutants, a council of Warworld to balance the Krakoan Quiet Council, an army of Furies and evil versions of people I already knew, and it is really overwhelming, even with the accompanying diagrams.