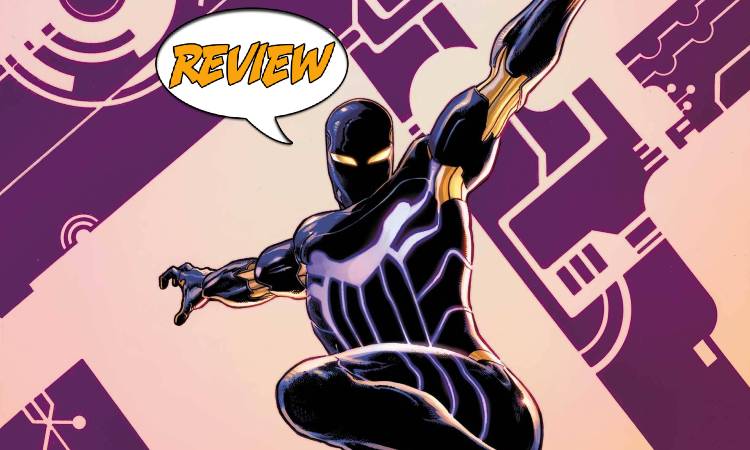 What is the secret of The Vibranium Man? Your Major Spoilers review of Avengers Forever #6 from Marvel Comics awaits!

Previously in Avengers Forever: On an alternate Earth where Wakanda has been crushed from existence and where the Black Panther is a forgotten legend, one man known as T’Challa will forge a new legacy for himself and perhaps even hope for a planet caught in the grips of the god-slaughtering King Killmonger.

THE COMING OF KING KILLMONGER

Years ago, in the native reality of King Killmonger (a Killmonger who wears a modified version of Asgard’s Destroyer armor), the true king of Wakanda sensed change in the winds and launched his infant son, T’Challa into the stars. Killmonger wiped out his Wakanda, then began working his way through alternate realities, extinguishing each reality’s Black Panther as he went. For his part, though, the boy who would have been Black Panther didn’t do too badly for himself, landing on planet Chandilar, where he trained in combat arts to become a hero known as The Sky Spider. When Killmonger attacks, though, his second world is taken from him, but the Vibranium in his system protects him. Years later, T’Challa is still traveling the universe in the hopes of finding his revenge as The Vibranium Man, but once again he faces the monstrous King and falls short.

And then, he is thrown into the heart of a star…

Once again, Aaron takes a whole issue to debut a new character, but unlike last issue’s history of The Doom Above All, I feel like this issue never quite crystallizes. The opening sequence calls on the iconography of Superman but seeing T’Challa go from a Spider-Man analogue to an Iron Man analogue to the big final page reveal feels like overkill. The Multiversal Masters seem to be composite characters (a Green Goblin/Ghost Rider, a Red Skull-Venom, and this issue’s Killmonger/Destroyer), and Ghost Rider has recruited an Ant-Man/Iron Man, but it feels like there’s waaaay too much going on here. Even with that complaint, though, this comic has a lot to offer, and the visuals are up to the task. Seeing Ghost Rider’s Hellcharger in deep space is a moment that could easily have been goofy, but instead, it’s majestic, and the history of this Black Panther/Superman/Spider-Man/Iron Man hybrid character is full of inventive imagery. Special kudos must be given to the two-page sequence of King Killmonger dismissively destroying Chandilar with the Destroyer’s traditional face-blast. It’s impressive.

BOTTOM LINE: A MATTER OF BALANCE

As with the previous five issues, I’m mostly positive about Avengers Forever #6, thanks to the art of Jim Towe kicking out the proverbial jams and a story that carefully assembles what feels like far too many elements into a world-spanning cosmic back story, earning 3.5 out of 5 stars overall. I’m still not sure what it is Ghost Rider is doing in his new role as All-Rider, but this “Vibranium Man” seems like an interesting addition to the Avengers mythos.

It feels petty, but I'm bothered by the fact that the cover is intentionally misleading, but it's a well-crafted comic with strong art and a story that works even as it puts a few too many pieces on the proverbial board.