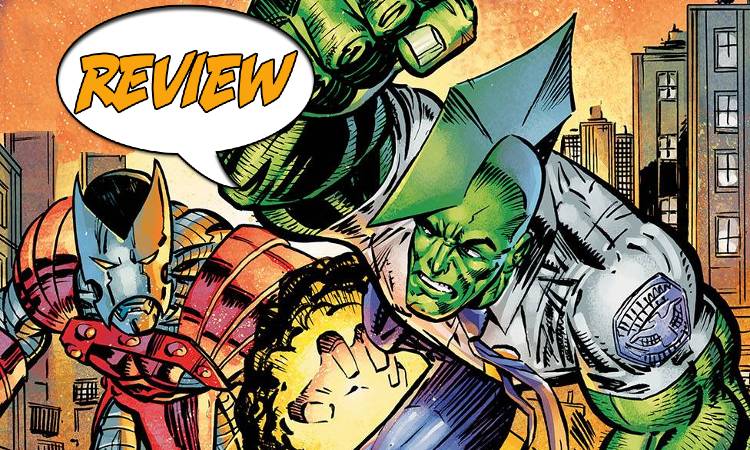 Previously in Super Freaks: Celebrating 10 years of the Savage FINcast podcast with an official fan tribute to everyone’s favorite Fin-Head! SAVAGE DRAGON fans unite to produce one of the wildest comics ever created! It’s crude! It’s rude! It’s hilarious! It’s the most offbeat, off-the-wall comic book ever committed to paper!

THE FANS DEMANDED (AND MADE) IT

The first appearance of the original incarnation of the Dragon was forty years ago in 1982, with the current incarnation bowing in 1992, thirty years ago. In addition, the Savage Fincast (a fan podcast about the Dragon’s adventures and extended family) hits the ten-year mark in 2022, making this issue a triple anniversary spectacular for only one dollar more than the average issue. We open with a story that parodies/homages the Spider-Verse crossover, featuring an alternate Dragon who faces his worst trial, but hopes that somewhere out there, a Dragon and his Rapture had a son and a happy family. And speaking of a world where that happened, we get a few pages of a super-powered Maxine, the wife of one such Dragon/Rapture son, finding that super-powered mayhem is almost as much fun as sex… Almost. Officer Alex Wilde gets a turn in costume, we meet a Malcolm Dragon who dies in the line of duty, a number of posters, glamour shots and pin-ups, and tales spotlighting Sergeant Marvel, Super-Tough, and Captain Tootsie.

Here’s the real steel deal about this comic book: It’s not only BY fans, but also entirely FOR fans, and if you don’t already love Malcolm, Maxine, Paul, Jennifer, and the rest of these people, this comic will absolutely make no sense for you. Many of these four-and-five-page stories end on cliffhangers that will likely never be resolved, explore aspects of the Dragon’s world that aren’t going to come back soon (if EVER), or are just designed to celebrate Larsen’s extended universe. Since these aren’t professional creators, the quality of the art and story varies wildly, though they all share a love of this strange extended universe of superheroes, weirdos, and hangers-on. Indeed, certain characters get a better shake in these pages than in the main title, such as Maxine, who gets a battle sequence and a temporary shift in the power dynamics of her relationship. It is, however, a comic book that you really can’t easily review, as it’s a true one-shot comic, and consists of a dozen individual story vignettes.

BOTTOM LINE: FUN, IF ONLY FOR THE ENTHUIASM

Still, you can’t help but be dragged along by the sheer enthusiasm and enjoyment these creators are getting out of things, making Super Freaks #1 a book that you should absolutely experience if you have or have ever had affection for Larsen’s big green lug(s), with wildly variant quality making for a right-down-the-middle 2.5 out of 5 stars overall. If you don’t already love Savage Dragon, you almost certainly don’t need to read this one, but true Fin-Addicts won’t want to miss it.

It's a loving tribute to 30 years of Savage Dragon, and it's appropriate hit-or-miss and of variable quality, just like the Savage Dragon title itself.