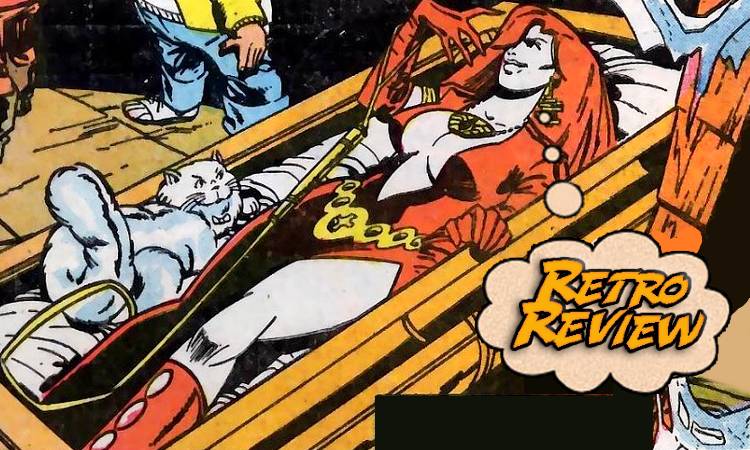 Sure, we all know The Cryptkeeper and Cain and Abel, but there was a time when Charlton Comics had the biggest and best roster of suspense comic hosts ever witnessed. Your Major Spoilers Retro Review of Scary Tales #1 awaits! Previously in Scary Tales: After discussing the first-ever whole-issue horror comic a few weeks ago, I’ve been whiling away a few idle afternoons looking into horror/suspense comics through the ensuing decades. The 1950s were clearly the heyday for such books, but well after EC Comics was no more, Charlton Publishing was still firmly aboard the horror train. Not only that, but their stable of hosts went far beyond the Keepers of crypt and vault. A dazzling array of illustrated Rod Serlings adorned their books, from Mr. Dee Munn to Professor Coffin to Dr. M.T. Graves but, as a young man haunting the comic shops, it was a crimson-tressed cousin of Vampirella who got my attention: Countess R.H. von Bludd.

This issue opens with a coffin being unearthed and the pulchritudinous princess climbing out to tell the children a scary story. Her first frightening missive begins in the 1830s, as Lord Clive returns to the family estate with his new young bride, Martha. The local vampire starts acting up, and before you know it, Martha bears the bite marks on her neck. They travel home, only for strange things to begin happening: His manservant chops down the family crucifix in their chapel, while Lady Martha starts to worry that her HUSBAND is a vampire! With each spouse suspecting the other, it’s naturally tense, but when she sneaks into her husband’s bedroom with a stake, he is surprised to find a vampire… The unusual structure of the story doesn’t really make the surprise twist that surprising, but I appreciate the depth of Sanho Kim’s illustrations. I’ve read a lot of “weird haunting Gothic manor” stories recently, but this one was visually lovely.

Speaking of lovely, the second story in this issue features Count Gregor von Bludd, a cruel noble who tortures his subjects and rules with an iron (age) fist, but when the daughter of one of his victims stands up to him? He marries her. Another handmaid plays a large part in this story, as Olga explains to her new countess why the palace is reinforced against vampires… from the INSIDE. R.H. (get it?) worries about her new husband’s appetite, even rebuffing his attempts to enter the bridal suite, but she quickly realizes that the situation is even worse than it seems. Rosa has contracted the terrible plague that has been spreading through the valley, thanks to her husband flying out into the night to eat peasants. Not gonna lie, that last panel of Count von Bludd spiking the proverbial “camera” with that piercing gaze is making my skin crawl. Rosa finally allows her erstwhile husband into her chambers, mere minutes before the plague could claim her. And then, her Xanatos Gambit unfolds. The terrible tyrant is overthrown, the Countess has escaped a deadly fate by embracing a fate worse than death, and not coincidentally explaining her own origin story? It’s all very meta for 1975, but Scary Tales #1 is a well-crafted comic that outstrips its prosaic title with strong art and a clever folding-in of the narrator’s origin, earning 3.5 out of 5 stars overall. If you bump into this comic in the wild, I recommend grabbing it just for the fun-factor.

Countess R.H. von Bludd makes her debut, with the artwork really taking center stage and an unexpectedly complex and well-written pair of stories making it worth the quarter they paid back in '75.