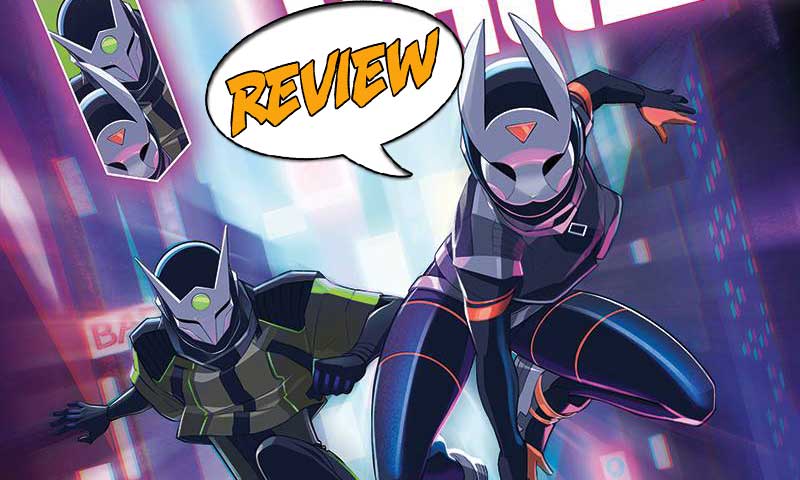 A hacker has become the target of an evil organization and it’s up to a pair of outlaws to keep her safe,  your Major Spoilers review of Fox and Hare #1 from Vault Comics awaits!

Previously in Fox and Hare: When black-market coder Aurora Yi uncovers top-secret data that has tapped into the past lives of the citizens of Mazu Bay, her world is turned upside down. Aurora has no choice but to turn to the Fox and the Hare,

Fox and Hare #1 opens up with a flashback as we see a pair of orphans teaming up to find their parents who’ve gone missing.  Things then move to the present as the titular characters arrive at an abandoned facility that’s supposed to have orphans trapped inside.  They suit up and storm the building, taking out the armed guards quickly and finding the kids.  While there they discover a hacker is also there and has set off all the alarms.  They convince her to come with them for her safety and one car chase later they found themselves at a safe house.  Elsewhere the leader of the organization trying to find the hacker sends out his right-hand man to get the hacker.

There’s nothing particularly bad about Fox and Hare #1.  The problem is that there isn’t anything particularly good about it either. The characters so far have no real depth or uniqueness, the plot is a basic “person with a wanted thing, on the run from baddie” plot that doesn’t do much to spice things up.  The one thing that could enhance this story, the setting, isn’t really explored or utilized in an effective way, it comes off as just another cookie-cutter, kinda futuristic city.  With all that being said, what is here, isn’t done poorly and it does scratch that mindless action itch.  The car chase sequence was fun and helped establish the kind of partnership that exists between the two main characters.  Also, while it doesn’t really utilize its futuristic setting, it also doesn’t over-indulge in technobabble or made-up jargon, which gives this a more realistic tone than was expected.

The art in Fox and Hare #1 follows the rest of this issue’s lead and is just not all that interesting to look at.  There are some good little details here and there, particularly how they handle any sort of colored light.  The character design is also a high point, particularly the animal-based costumes.  But, a lack of detail and shading gives this a flat look that doesn’t come off as intentional.

Fox and Hare #1 takes all its elements and does only the bare minimum with them.  While it’s hard to point out anything here that is bad or poorly executed, nothing rises above average to be noteworthy.  You won’t be disappointed, but you won’t be blown away either.  2.5 out of 5 stars.

Fox And Hare #1 never manages to rise above a basic, run-of-the-mill comic book. Some nice character design and competent action sequences keeps it from being disappointing, but they don’t go so far as to make this memorable.