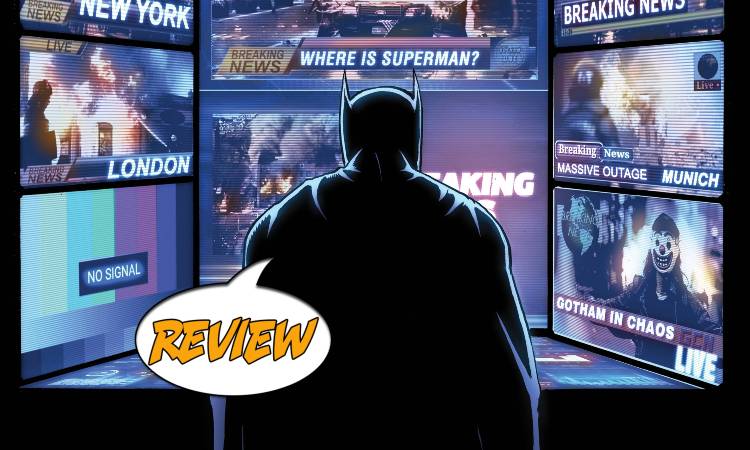 A complete power outage leads to chaos in the streets, and Batman’s allies have gone MIA. Your Major Spoilers review of Batman: Fortress #1 from DC Comics awaits!

Previously in Batman: Fortress: When an unknown alien ship enters Earth’s atmosphere, disrupting global power and communications and plunging the planet into chaos, the world is left wondering… where is Superman when he is needed most? In the mysterious absence of the Last Son of Krypton, Batman must rally the rest of the Justice League to counter the alien threat.

But first, he must quell a crime wave on the blacked-out streets of Gotham!

We open in the darkness, which is commonplace for a Batman story. This time, however, it’s complete, as a power outage has left Gotham City without power, leading to a free-for-all in the streets. Even Wayne Manor isn’t safe, as a group of criminals breaks in to rob the place, only to run afoul of Bruce Wayne himself. One of them even thinks he can steal Martha Wayne’s pearls, which is a one-way ticket to punch-face. Thanks to the back-up generators in the Batcave, Bruce and Alfred are able to figure out that it’s a WORLDWIDE outage, while Commissioner Gordon manages to rig up a series of car batteries to light the Batsignal. The Dark Knight spends the entire night fighting the criminal element, including an escaped Penguin and a Joker behind the wheel of a stolen school bus. By the time the issue ends, the members of the Justice League have assembled at the Hall of Justice and Batman is ready to strike back at what he believes to be an alien ship behind the blackout.

First things first: Darick Robertson draws one really incredible Batman. The visuals in this book are just plain lovely, starting with Bruce Wayne fighting out of costume and continuing through the night of endless chaos. I have to admit, the story has some moments that gave me pause, but some are story-related (Batman has to prioritize crimes, letting minor looting and non-life-threatening crimes go by), some are clearly peccadillos of the creative team (like his refusal to employ lethal tactics, even in the face of global crisis) and some just don’t make sense (like why there exists a busload of kids for Joker to hijack in the middle of the night.) Even with those flaws in play, though, it’s an okay comic when taken on its own merits. I’ll be interested in seeing WHO the Justice League members Batman has called on are, as even without Superman in play, Earth-0 would still have powerful protectors.

The worst part about Batman: Fortress #1 was that I read the comments online, but overall, it makes for a well-drawn Batman story with an interesting story hook at its core and an execution of that premise that works more often than not, earning 3.5 out of 5 stars overall. I hope to see the rest of this eight-issue limited pick up and run with what they’ve established here.

There are some puzzling story moments in these pages, as well as a threat that has yet to come into focus, but the art is stellar. Based on that alone, I'll be back for at least one more issue.