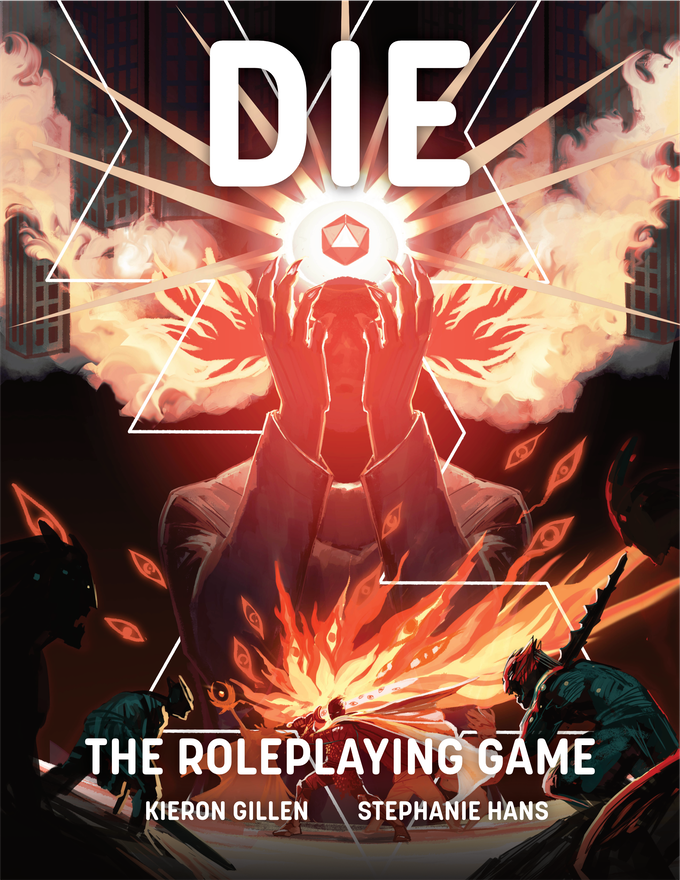 In my opinion, DIE is one of the best comic series to come out in the last few years. In fact, it may be my all-time favorite comic series (but I won’t think too hard on it). I am the target audience for the comic book. When the comic was written, I was a full-time GM studying game design and understanding what collaborative storytelling meant. And DIE is designed to explore that very theme. I am ecstatic that the game has a successful Kickstarter, and I am anxious to look at these rules. As an aside, this is a superficial interpretation. The beta is over 100 pages, and I’ve tried to condense it into a short article. However, I think I got the gist of it.

You can check out the Kickstarter here.

I spent a lot of time playing at a lot of tables. And I strongly encourage safety tools for all my games. But for DIE, the themes are profound and would benefit from some form of safety discussion at your table. In fact, the playtest recommends precampaign conversations that are important to have and introduces the X-Card Safety Tool. If you plan to run this game, consider incorporating appropriate tools applicable to your table. Die follows an exciting premise where you are effectively creating two characters. You make a persona based on the real world with everyday mundane problems. This includes the GM, who plays his persona with the other players. There was a fun example from Kieron’s own playtest where the group used to be a band. But beyond that, the goal is to accomplish three things, and this is a direct quote from the playtest.

The playtest lists suggestions to help get to the core of the persona, so the GM can figure out what is the Core Drive of the character. This seems to be the driving force for the character’s personality and is used for the actual character creation. And here is where things are interesting. The GM assigns character classes based on the core drive of the characters. Each character class is based on a die. The Dictator is a d4, while the Godbinder is a d12. The catch is that the GM’s persona is assigning these characters in-game. It creates this weird mind-bending effect as both the player and the persona must figure out how they react to the GM and the GM’s persona’s decisions. Lowkey, I think this could make a great show, and I’m adding this to my shortlist.

Interestingly enough, the personas are transferred to the new world precisely as they are. Only when the personas grab their dice, do they transform into their characters. The playtest stresses that the persona fuses with their character as a significant theme. The playtest then follows what feels like a regular RPG session where the Game Master is setting up adventures and towns. The game also provides examples of incorporating characters into your adventure design.

The party can go home when every persona agrees to leave. However, this includes the dungeon master. Much of the game’s climax is either killing the Master or convincing him to go somehow.

The game uses the same standard attributes that you would expect from D&D and Paizo products. In the game, you roll a certain about of d6s relevant to a stat, and every 4+ is a success. The GM will call a certain number of successes needed to complete a challenge. Your character sheets have additional abilities you can do. Combat has an initiative order, and everyone generates Guard, which functions as a damage buffer separate from health. The player may then roll their d6 dice pool against the opponents’ defense to do damage.

From my interpretation, this seems straightforward, and the interest in combat appears to come from class mechanics. Emotion Knights have a sacred emotion which they draw their power from. Which, from a storytelling standpoint, seems so powerful.

This game is exciting and follows the LitRPG genre well. The beta is filled with Kieron Gillen’s voice and funny commentary about the mechanics he wrote. The game suggests 2-4 sessions. While you can probably get closer to 6-8 with larger parties, this game is a shorter adventure. Die takes on complex themes, and it isn’t for every table. But if you have a few sessions to try this game out, I highly suggest it. Great work here, and I am excited to run it.