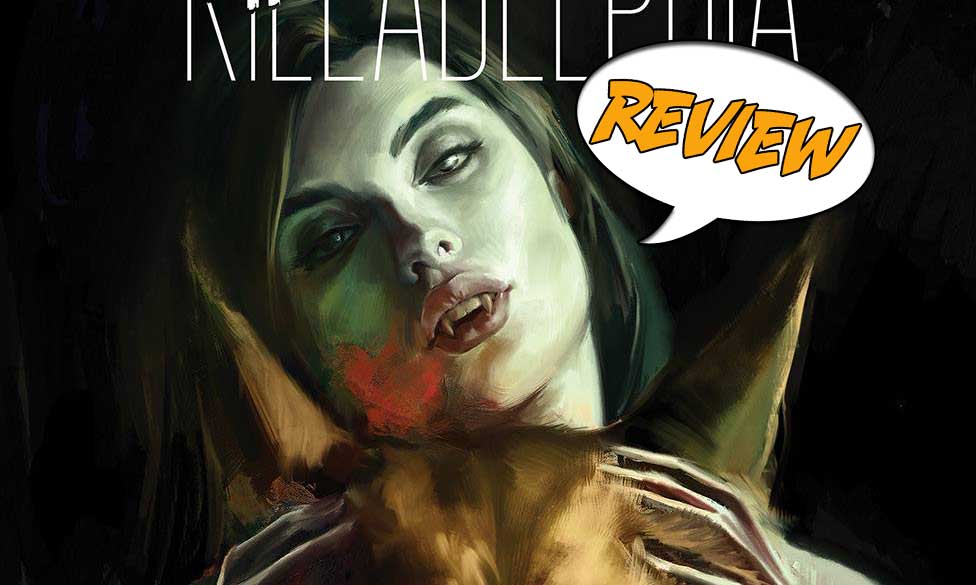 With the addition of General Toussaint to the mix, the balance of power shifts yet again. In a struggle between immortals, where do the lives of humans fall? Find out in Killadelphia #22 from Image Comics!

Previously in Killadelphia: George Washington captures SeeSaw, recognizing that there is something different about him. SeeSaw agrees to hear him out, and meets Aelio, the Keeper of Knowledge. Jose goes out with a group of Lycans to find vitamins. The pharmacy they go to may be looted, but Jose knows where their locked supplies are. A small group of armed humans demand that she give them pain killers. They want them not for themselves, but for a few people they rescued from a hospital. Aelio tells SeeSaw the story of the Eterna, vampires, and the rightful rulers of the planet. They lived in harmony with nature until they started being killed by sunlight. Then came the rise of mankind and the slow destruction of the planet. Washington was part of their grand plan to selectively create a special hybrid creature to retake the world.

Killadelphia #22 opens among Abigail and her people. Jefferson is appalled that the Sangsters have Lycans on their side. Lycans can actually kill Vampires. Abigail thinks he is panicking needlessly. When there is a knock on the door, she sends him to answer it. George Washington is there with SeeSaw and Aelio. There is a brief skirmish, but George simply wants to talk with Abigail. He tells her the existence of their kind is in danger and she has a choice. She can hear him out…or he will destroy her.

Jimmy and Tituba follow a trail of blood that they assume is SeeSaw’s. It leads down a dark alley, which is not the place to be in this world. She assures him that she can create an aura that will repel beings from the Dark Realm. Jimmy asks her about how she became a witch, and we get another tantalizing bit of this world’s history. Her people were from Sicily. The Lycans were Moors who came and conquered. The witch queen cursed them before she died, but after the conquerors left, it was their offspring who were the next generation.

George Washington continues with his explanation. The Light Realm prefers not to get involved with mortals, at least directly. However, in the name of balancing the scales of this conflict, they resurrected General Toussaint and his officers, famed for the Haitian Revolution. He became their chosen one, hunting and destroying the Vampires without mercy. Over the years he has become the best there is, and if they want to survive against him, they need to work together. I like the idea of a specialized vampire hunter, and I love the way the creators continue to find interesting historical figures to take on these roles.

Jimmy and Tituba follow the trail of blood to where SeeSaw had recently been held. They find the crown of thorns he had been wearing. Tituba wonders if he is dead, but Jimmy knows he is a survivor. Vampires come out of the shadows and close in on them. Tituba releases her aura and blasts then all. But the effort wears her out; she requires rest before she could attempt this again. They make their way home where Jose has some unexpected company.

CHARACTERS AND THEIR COMPLEX MOTIVES

One of the things I particularly like about the art of Killadelphia #22 is the care taken with individual faces and expressions. It is as though every moment of importance in this book has been considered carefully from each character’s point of view. Events happen, and everyone has an individual response. Jefferson is seriously concerned about the strength of the Lycans. Abigail appears almost bored with them, although when Washington arrives she is not afraid to challenge him. For his part, Washington is as cool a customer as you can imagine, and the white suit he wears echoes this.

As Jimmy and Tituba investigate, there are hints of glowing eyes in the darkness behind them, just enough to be unnerving. I like the suspense that they do not find SeeSaw immediately, but rather see the aftermath of the time he spent in captivity. That is where the vampires attack, and we also see a change in Jimmy. Not only has he returned from being a vampire, but he feels all to keenly the pending responsibility of fatherhood. His worry is keen. But nothing has prepared him for the power of Tituba’s aura.

Killadelphia #22 continues along the fascinating path of introducing a new level of complexity to the conflict and raising the stakes. Basing important characters on people from history add an additional level of richness to an outstanding horror book.