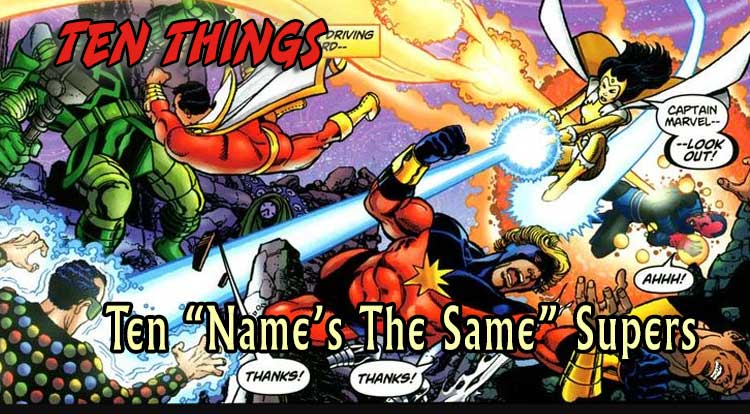 There are ten million stories in the Naked City, but only eight million people. Somebody’s lying. Or maybe some people just have the same name? Welcome to Ten Things: Ten “Name’s The Same” Supers!

Whooshman-Bicarbonate Films, in conjunction with An Amateur Comics Historian and the three Voltons, Presents: After exposure to strange volcanic gases, Rita Farr gained the ability to grow, shrink and stretch her limbs to great lengths. Drummed out of Hollywood for being a “freak”, she joined Niles Caulder’s Doom Patrol, using her versatility and superhuman strength for the greater good. She eventually died to save innocents, but was resurrected due to #TimeTravelShenanigans several times. She should not be confused with… A successful solo hero, Helen Traux met and allied with Mr. Incredible before marrying him and becoming Mrs. Robert Parr. It was somewhat ironic, given how hard she worked to break into the male-dominated field of superheroing and how she never expected to marry or have a family. Three kids and one long hiatus later, she and her family returned to action as The Incredibles!

Due to the existence of Rita Farr, Helen is referred to in promotional materials and merchandising as “Mrs. Incredible”. After inheriting a fortune from his late uncle, college student Rick Stanford took his cues from comic books and set out to become a knight in the dark, crusading in a cape, something something Adam West. His story was complicated not only by his being something of a schmuck, but by the return of said rich uncle as one of the undead.

Filipino comic books are always a trip, my friends. Of course, he shares a name but little resemblance to… Likewise driven by the urge to be Batman, The Midknight (real name unrevealed) is the protector of Gothtropolis. His single appearance is actually as part of the back story of Attaboy, his former sidekick, who grew up to be something of a slacker and a layabout. In hindsight, given the army of characters who use the Midnight appellation (from the Spirit knockoff to Moon Knight’s sidekick to a random vampire in the Marvel Universe) it’s kind of surprising that more heroes haven’t thrown in the “k” to get in on the Dark Knight action. Appearing exactly once in 1945, Rod Rooney was a skilled detective who, for some reason, put on short pants, pixie boots, and a cape to tackle his most difficult cases. I’m going to be honest, I don’t know WHY he does it, but the fact that his one published adventure was called The Murderer That Had No Feet fascinates me. And then, there’s this next guy… Weirdly, Rod’s one-shot adventure actually told us more about him than his namesake, a member of the Team Supreme in the pages of Penthouse Comix. Designed to be an indictment of early-90s character design, this Red Rogue (real name unknown) is most entertaining for not wearing any red at all, but also for basically being Cable smushed together with Warblade from WildCATs. A creation of Jim Steranko, Talon was reputedly created for Marvel Comics, only to have the publisher reject his take on the barbarian hero. Steranko then decided to self-publish his hero’s adventures, but several decades later, no finished stories have materialized. Talon has appeared in multiple place, including several issues of Wally Wood’s creator-owned Witzend anthology in the early ’70s. But he’s definitely NOT… A one-time assassin for the Court of Owls, Calvin Rose ran away from abusive parents to travel with the Haly Circus. Once indoctrinated into the Court, he walked away when ordered to murder a young mother, leading to him going straight(ish) and becoming a member of Batman, Incorporated. Strangely, ANOTHER Talon popped up not long after, sort of pushing Calvin’s story aside in favor of William Cobb, one of many takes on “What if Batman, but bad?”

A member of Striker Force 7, a team of international/intergalactic futbol/soccer heroes under the command of soccer superstar Cristiano Ronaldo, Tremor (real name unrevealed) has to learn to work together with his teammates to save the world. The question is, can they learn to work together as a cohesive unit before galactic war claims the Earth?

Boy, I hope so. Especially given the existence of… A member of the villainous Superior 5, a team of villains eerily reminiscent of the Silver Age Inferior 5, Tremor (real name unrevealed) works with Jongleur, Splitshot, Lagomorph, and Hindenberg for eeevil purposes. If I were to make an educated guess, I suspect that there may be some Earth-3 evil doppelganger nonsense going on here. A member of The Harriers, a group of mercenaries under the command of Wolverine’s old friend Hardcase, Tom Nakadai is probably the wildest of his team with his jetpack. The Harriers made one appearance (which was CLEARLY a “backdoor pilot”) in an issue of Uncanny X-Men, but never returned, leaving the question of whether Tom was as inspired by Marvel’s G.I. Joe comic as he and his comrades seemed. He is in no way the same guy as… The son of Green Lantern John Stewart and Hawkgirl Shayera Hol of the DC Animated Universe, as seen in Justice League Unlimited, Rex Stewart is a member of the Justice League in the future. An ally of Batman Terry McGinnis, Warhawk has a much deeper back story in the comics adaptations than in his three or four JLU cameo appearances. Struck by lightning as a child, the awesomely named Voltaire Megaton keeps his powers secret until adulthood, when he goes public in the most impressive way possible. His TV adventures lasted only one season, but it’s interesting to see the influence of modern US superhero movies on a traditional Filipino hero. Kidlat is Filipino for “lightning”, which is why he is named just like… A member of an elite crimefighting unit known as The Pintados (“painted ones”), Pido Zapata is one of the most skilled street fighters in the world and wields a pair of lightning-charged escrima sticks. In addition to the obvious zappiness, he can also release a powerful EMP to disrupt electronics in a large radius around him. A member of the Ani-Men for one mission, Veronica Dultry was captured by the alien known as The Stranger. Her slightly bug-like powers were mutated into REALLY bug-like powers, and she has appeared periodically (mostly in crowd scenes) since, but at one point was puzzlingly absent for more than a decade. She exists in the same universe, but should not be confused with… A member of a special European task force called… Uhh… Task Force? Really? Okay, so anyway, Cornelia van der Valk was employed by Euromind, an EU offshoot of SHIELD. She appeared twice, circa 1996, in a comic that was only available in Italy, which makes me wonder what other countries have hidden spurs of Earth-616 lore out there. Montenegro? Are you listening? A Golden Age hero of the Marvel Universe, Elizabeth Barstow made three scattered appearances while never wearing silver. Decades later, she was revived by Roy Thomas as an ally of The Invaders and FINALLY given an armor that explained her odd choice of nom de guerre. She is explicitly different than… A young Syrian man who lost both legs in a terrible accident, Bashir Bari initially gives in to bitterness and rage. Then, he is chosen by an ancient power to wield the power of the Silver Scorpion, giving him technopathic and technomorphic powers to fight injustice even without his legs.

I don’t know about you, but this image alone makes me want them to print more of his adventures.

The mysterious Gabrielle Doe was found in Markovia with tremendous powers, no memory and an amazing hairstyle. After joining The Outsiders, it was discovered that Gaby was actually an ancient energy being known as an Aurakle, possessing the seemingly dead body of one Violet Harper. Violet was bad news, but eventually, Halo was able to forge her own existence, separate of alien intellect or raging teenager with a switchblade. She most definitely is NOT… One of a score of clones of Will Eisner’s The Spirit, Bishop Brubus (first name unrevealed, as Bishop was either his actual job or a disguise) was seen exactly once circa 1943. He battled the nefarious Baron Schlang, whose goal was to destroy music, religion, and love.

Naturally, this angelic avenger of the night punched the Baron off a cliff to his death.

Once again, this week’s topic, Ten “Name’s The Same” Supers, is all me, but feel free to follow along @MightyKingCobra to suggest a topic of your own! There’s always more Ten Things madness on my Twitter or check out the full Twitter archive here! As with any set of like items, these aren’t meant to be hard and fast or absolutely complete, and you could even come up with an idea that doesn’t double the workload for me! Either way, the comments section is below for just such an emergency, but, as always: Please, no wagering!