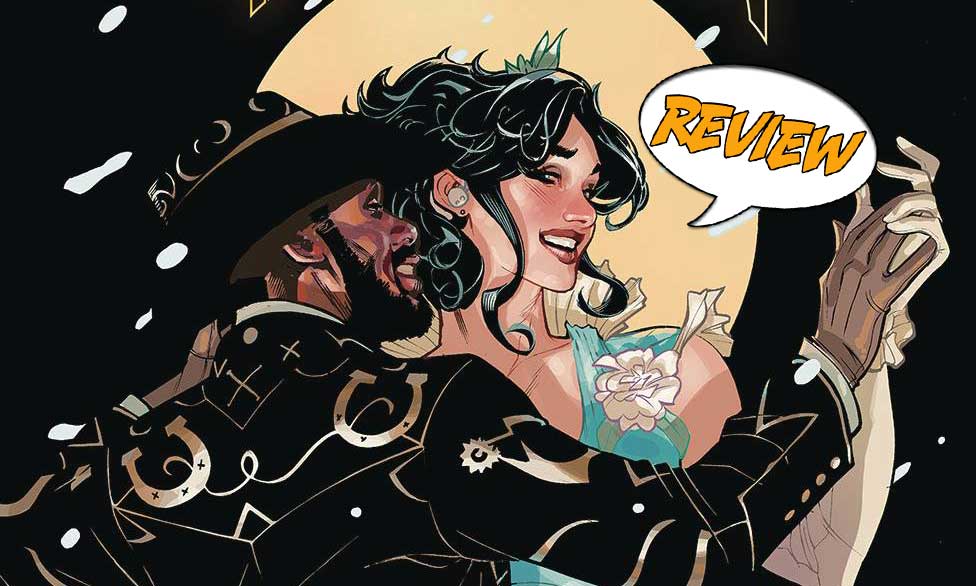 Claire and Chris do some hero legwork. Do the ghosts have something to do with Johnny Caspar, and how does the Crossdraw Kid fit in with it all? Find out in Adventureman #9 from Image Comics!

Previously in Adventureman: Claire meets Chris, the Crossdraw Kid, as they fight off a bunch of ghosts. A flashback to the past introduces us to Caspar Spettero, a speakeasy operator and also the head of a gang of ghosts back in the 1930’s. He was taken down by Chris’s grandfather, the Crossdraw Kid of the time, who still watches over him today in the nursing home they both live in. Chris’s grandfather warns him about Adventureman – he knew of one who went bad. Claire’s sister Ursula continues to work on the serum, and it seems to be working.

THE START OF A PARTNERSHIP

Adventureman #9 opens with Claire and Chris investigating the subway tunnels on totally not-a-date. Chris has so recently become the Crossdraw Kid that it doesn’t feel real. Life pretty much goes on as normal, just now with the occasional need for superheroics. Claire can sympathize as she describes herself as “half single mom, half fictional character.” They reach the abandoned station, which is just a grimy abandoned station.

They regroup for some ice skating and a little more conversation until Claire slips. Her body has more density than that of a normal person now, and she cracks the ice. Chris gets a phone call about his grandfather, Charles. The two of them head to his residence. Charles is in the ICU, and the ICU is closed to visitors as one of their other residents has gone missing. The nurse points out the room, and Chris’s eyes narrow.

He confirms for us what we suspected last issue. The gangster, Johnny Caspar, is the missing resident. Charles wanted to live in this nursing home so he could continue keeping an eye on Caspar. Chris is starting to suspect that everything – Crossdraw Kid, his grandfather, the ghosts, and Claire – is somehow connected.

Tommy continues with rehearsals for the school play, “A Christmas Carol.” He and his friend have the idea of trying to liven it up a little bit, much to the teacher’s chagrin. After school, his Aunt Bits picks him up and takes him to the library. She is trying to research Johnny Caspar for Claire, and there is too much for her to go through alone. Tommy is not too thrilled, until she offers to pay him for anything useful that he finds.

Meanwhile, in the abandoned subway station, three ghost women have Johnny Caspar and hook him up to a ghostly machine. With a strange burst of energy that appears even above ground, his physical body dies and he comes to life as a ghost. Channeling the ghostly energy, he returns the women to a more youthful appearance. He also has new ideas for what to do with this new Ghost Gang.

Claire takes a dose of super serum, with coffee this time, which is not an improvement, and waits for a subway. An express goes past, and she follows it into the tunnels. Tommy continues looking through clippings and thinks he may have hit upon something. Chris wants to help Charles, but also wants to ask Claire out and is looking for a sign. And all points converge on the ghostly station!

The art of Adventureman #9, from panel to panel, is clear and gorgeous. From the subtle expressions that play across Chris’s and Claire’s faces, to play rehearsal at Tommy’s school, to the ghosts working in the abandoned station, we understand everything so well. I love the ice skating scene. Claire and Chris are still trying to get acquainted, but they look very well-matched. It also reminds us that it is winter and near the holidays. And then, as happens in skating, Claire just starts to lose her balance. Chris tries to catch her before she can warn him – and her breaking the ice is unexpectedly funny.

I like the subway tunnels and how different they look at different times despite similar color schemes. At the open, they look like older construction, sturdy but run down. As Chris and Claire explore, there is more and more of the detritus of abandonment. But when the ghosts visit the same location, suddenly the arches have a more organic rounded look. The detritus is gone and the lights overhead are intact again. We see hints of the older grandeur, but magical energy takes the foreground. Johnny Caspar gets a grand entrance and rebirth out of this.

Adventureman #9 deftly takes all the threads of stories – including the school play – and starts to tie them together. What had felt like bits of plots is developing a serendipitous focus that fits in the genre like a crucial puzzle piece. It is a delight to read and even more wonderful to look at.

While Chris and Claire get to know each other, the ghosts are hard at work underground.