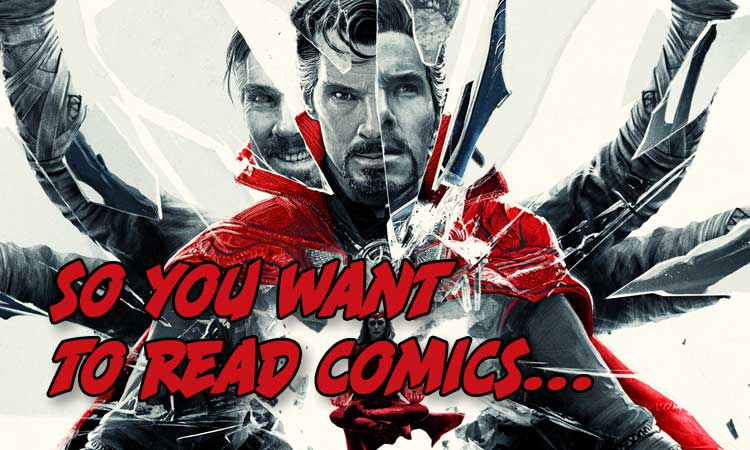 Things get multi-versal with this week’s “So You Want To Read Comics.”  This is our weekly feature where we take a look at a single topic or genre and then give you two comic book recommendations, perfect for new readers, based on this topic or genre.  This week we’re taking a look at Doctor Strange and The Multiverse of Madness.

It’s a new month, and that means a new MCU movie or TV show, and while it’s growing increasingly unlikely that any of these new releases are someone’s first foray into the world of comic book adaptations, and thus have had other opportunities to cross over into the print side of things, we persevere. Doctor Strange and The Multiverse of Madness is the next installment in the Marvel Cinematic Universe, but unlike the other films in the MCU catalog, this one leans more into the comedy and horror genres. Also, as the name implies, this film continues the current theme of the MCU by exploring alternate versions of these characters and the consequences of crossing from one universe to another.

So, if you enjoyed Doctor Strange and The Multiverse of Madness, and wondered where you can continue your enjoyment in the comics, here you go.

For a good portion of Doctor Strange’s existence he’s been handled in a mostly serious tone.  But for those who’ve seen his recent cinematic outing, you’ll know that that isn’t the only way to approach the character.  It just so happens to be, that comic book writer Donny Cates also knew this.  In this collection we see the normally competent Stephen Strange, losing his title, making some bad decisions, then some more bad decisions, raising a city from the dead, and accidentally giving the devil a summer home on earth.  Throughout all these misadventures there’s a humorous streak that never ventures into slapstick, while managing to show a character fight not only with gods and devils, but also the concepts of humility and worth.  Also, this collection includes the crossover event “Damnation” which is a decent gateway story for a few other characters as well.

Okay, there’s a lot of things wrong with this recommendation.  For one, it’s not exactly an easy read.  Two, it’s a DC book, Doctor Strange is a Marvel Character and isn’t in this book at all. Three, like most books by Grant Morrison, it has a tone of headiness and pretention.  Okay, now that those are out of the way, here’s why this is still be recommended:  it’s basically a collection of stories featuring versions of characters that are slightly and heavily skewed from the version that is most popular. The nice thing is that knowing any version of these characters, isn’t a prerequisite to get something out of this series. Much like how Doctor Strange and The Multiverse of Madness was marketed as a romp across different universes where Stephen would meet alternate versions of characters, this series does exactly the same thing, even if doesn’t always make a ton of sense.  And, let’s be honest, sometimes it’s just kind of fun to see an outlandish concept taken seriously.

(As a side note, both of these recommendations are available to read for free with a Comixology or Kindle Unlimited account.)

What did you think of these recommendations, what are some of your favorite stories with people traipsing across the multiverse?