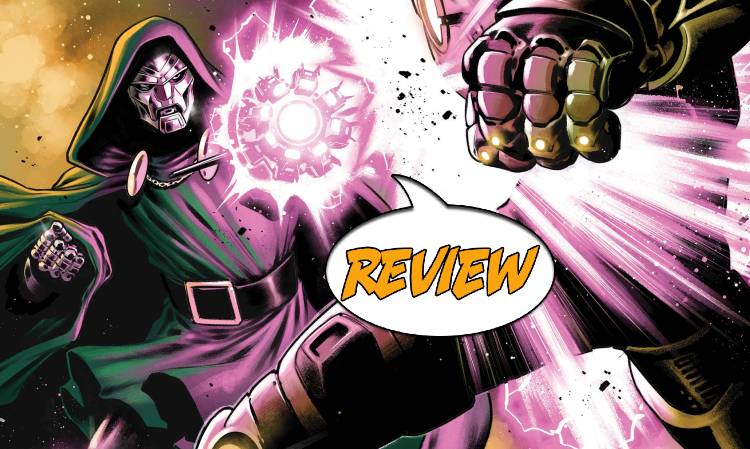 The Cormorant is reassembling the greatest weapon in the universe and the only hope for humanity is… Victor von Doom? Your Major Spoilers review of Fantastic Four #43 from Marvel Comics awaits!

Previously in Fantastic Four: The last time the Cormorant appeared, he destroyed the Baxter Building and the Latverian Embassy, completely overpowered the Fantastic Four, and left without anyone laying a hand on him.

Now, for the sake of the universe, Doctor Doom must face him alone.

What do Grasshopper, Southpaw, and The Gauntlet have in common? Well, they were all created by Dan Slott, but more importantly, their objects of power are all pieces of an ancient armor of unimaginable power. They also get beaten, killed, and/or maimed in this issue as The Cormorant works to reassemble the Alpha/Omega armor. At the same time, Johnny Storm has traveled into deep space, assembling a massive army of warriors, including the Guardians of the Galaxy, the Unparalleled of Spyre, the Imperial Guard, and more. But when Ego, The Living Planet agrees to ally with them, The Human Torch knows it’s time to bring the fight to the alien invaders. In another dimension, The Thing and Mr. Fantastic are suffering the effects of radiation in the area known as The Barrens, with Reed estimating that they, She-Hulk, and Jack of Hearts will be dead in hours. As for the Invisible Woman, her secret mission is revealed as she frees Uatu the Watcher from captivity on his homeworld, with a little help from Nick “The Unseen” Fury.

Oh, and as the issue ends, Doctor Doom has mastered The Tactigon and made a powerful ally.

BUT REED AND BEN ARE STILL MAROONED

As one of the people who read She-Hulk at the turn of the last century, I remember seeing the seeds of this story and hints of the massive future battle that She-Hulk would be part of, but it felt like the kind of thing that would never be followed up. Likewise, the obvious connection between Southpaw and Gauntlet, but this issue closes those story circles perfectly. The one downside is that, with this issue focusing so much on Doom’s battle with Cormorant and The Watcher’s torture by his own father, the Fantastic Four feel kind of marginalized. Then again, this book manages to be a big giant crossover without all the negatives of that kind of story structure. Stott and di Vito make it a lovely issue to read, for the most part, but I am bothered by a couple of moments. Johnny’s big “space general” moment is blunted a bit by indistinctness, making it difficult to tell who all is assembled, while the sequence with Cormorant assembling “his” armor (another double-page spread) is a little too discreet in its violence. It seems clear that Grasshopper is dead, but it’s not so clear if Gauntlet is alive, and aside from a one-liner, Southpaw’s fate is vague.

Still, even with those issues, Fantastic Four #43 is a good issue with a lot of moving parts, advancing the Doom and Watcher portions of the story, connecting some continuity dots, and reminding us that both Storm siblings are pretty badass, earning 3.5 out of 5 stars overall. I honestly feel like this story is the most successful cosmic Marvel comic in a few years and I can’t wait to see how this all plays out.

Pulling together bits and pieces that Slott's been sprinkling through more than a decade of stories, with impressive art and a truly epic scale, it's worth your time and energy.