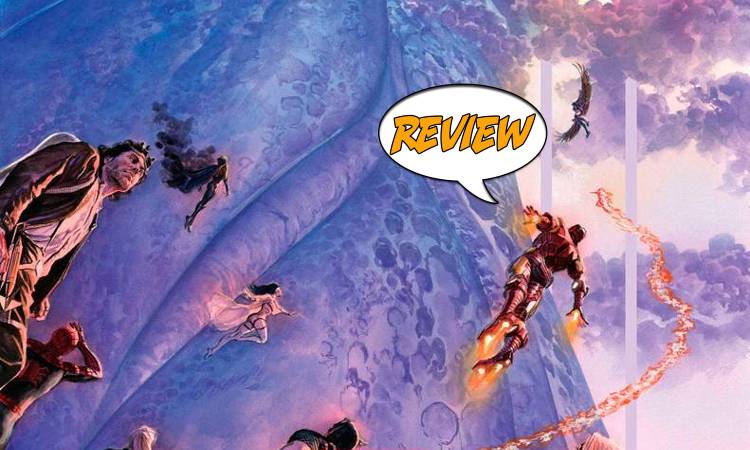 What is the secret of Lady Lotus’ new mystical powers? And can even the assembled heroes overcome its power? Our Major Spoilers review of The Marvels #10 from Marvel Comics awaits!

Previously in The Marvels: Our heroes thought they’d discovered the source of Lady Lotus’ power – but they’ve found something far greater. They find themselves in another world, a secret universe full of mystery, unimaginable power, deadly danger, and even heartbreak for one of the Marvels.

Plus: Threadneedle takes matters into his own hands, in a very unusual way.

AND THE DOORS SLAM CLOSED BEHIND THEM

As Lady Lotus rages outside, the golden doors slam closed, trapping the assembled heroes, villains, and hangers-on (Aero, Captain America, The Black Cat, The Human Torch, the villain Powderkeg, Iron Man, Storm, the Golden Age Vision, the new Warbird, Melinda May, and Kevin Schumer, the Tinkerer’s nephew) find themselves in another world entirely. Their technological, psionic, and whatever-the heck-Aarkus-The-Vision-is powers fail to find anything useful, but they discover the ruins of a lost society, giant empty armors…

…and the body of Warbird’s father. Kevin and Iron Man even work together to get Stark’s armor up and running once more, but before they can figure out a way home, the Marvels are attacked by animated skeletons with malicious intent. Kevin is once again amazed at how quickly they respond to a threat that they can battle, but things get weird again when Ace appears in the alien landscape and leads them to… a comic-book store?

Since the beginning of this series, I’ve been finding parallels to the earliest days of Astro City, a comparison that finally crystallizes here. The heroes are out of their element in a strange new world, but still somehow within the confines of the established Marvel reality. The balance of characters here is quite good, though it’s starting to feel like we’re getting a few too many characters in play to keep everyone balanced, but somehow Busiek gives everyone a moment. Best of all, it comes through the eyes of Kevin Schumer, which makes even The Black Cat’s garden-variety jump and kick powers seem as incredible as they would in our world. The meta-statement of the issue’s cliffhanger ending in the comic book store could have been a deal-breaker in the hands of a lesser creative team, but somehow, it all works here.

BOTTOM LINE: STILL WORTH YOUR TIME

The Marvels #10 reminds me of a much more successful version of the classic DC Challenge, pulling in characters from the depth and breadth of Marvel and putting them together in a story that probably shouldn’t work, but still does, all held together with spectacular art for 4 out of 5 stars overall. If there’s one thing to learn from The Marvels, it’s that there’s no such thing as “B-list” or “lower tier” characters in the hands of a sufficiently talented creative team.

So, let’s hope this book keeps going until they give that one, shining Stunt-Master moment we’ve all been waiting for since 1969.

It's kind of amazing that this issue works as well as it does, but the combination of really strong art and the expert plotting of Busiek balances six heroes, two villains, two universes, a SHIELD agent and a comic-book-store-within-a-comic-book in a very entertaining way.