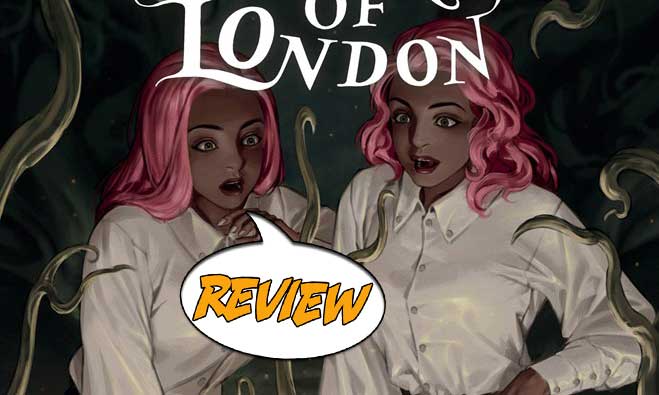 Camping in the woods seems pleasant and peaceful, right up until a guy with a wolf tattoo attacks a young girl’s grandmother. Is this another job for the folks at the Folly? Find out in Rivers of London #1 – Deadly Ever After – from Titan Comics!

RIVERS OF LONDON: DEADLY EVER AFTER #1

Previously in Rivers of London: Several police-related events coalesce around the presence of a werewolf in London. Stephanopoulos uncovers some corruption in the police. Nightingale trains recruits in some of the basics of magic. Peter’s investigation of strange occurrences at a fence makes the Folly aware of a werewolf. But it is when Foxglove and Abigail go out to sketch and explore that they find the werewolf – a young man from Sweden who came to London on vacation and managed to lose his passport. It is never a dull moment for the Folly!

Rivers of London #1 (Deadly Ever After) opens with a snapshot into 1897. A painter and his daughter sell paintings of tree nymphs. These are fanciful pictures, and some men take a dislike to them and destroy them. At bedtime, the painter reads fairy stories to his daughter, the ones with happy endings. As we shall soon see, this is a frame for the current arc.

Over a century later, Chelsea and Olympia (who are river goddesses, I believe) are with a group doing training in the river in the same area that the painter used to paint years ago. It is a lovely day, and there are campers nearby grilling. One particularly muscular young man catches the notice of both girls.

But that is in passing. They go for a walk in the woods, singing, and sharing some weed. A young woman overhears them and invites them back to where she and her friends are camping. It turns out they are a group of actors, including the muscular man they saw earlier. They’re grilling vegan burgers, but Haley tells them she has some real food hidden around the corner, unless the foxes got it. When Chelsea and Olympia mention that the foxes would probably prefer mulberries, Haley does not see any mulberry tree. They realize that it is completely invisible to Haley, or at least it is until they pick a berry and hand it to her. Then it appears in a glowing blue light. Unknown to the young women, a cloaked figure sees this.

Time passes. Night falls. There is a scream. Chelsea and Olympia run toward a camper where a girl wearing a red hoody stammers something about her grandmother. Inside their camper, the muscular man bites the older woman in the neck despite being vegan. Chelsea dashes to save the woman as the man, Chris, leaps toward Olympia. Some magic seems to be influencing him, and this magic interferes with her glamour. Instead, she reaches out toward the young girl who whacks Chris with her book.

By the time morning rolls around, the police are there in force. The girl gives her book, a book of folk and fairy tales, to Chelsea and Olympia. Her grandmother is in the hospital. The police also interview the actors, and the two women overhear some of their conversations. Apparently, they saw a blue light, and afterward, Chris seemed different. Olympia decides to call Peter. Something strange is going on, and that is his department.

They leave the woods and leave the book behind. The pages flip open to the tale of the Frog Prince. The next day, at Wimbledon Studios, one of the camping actors strides into the studio late and wearing green diving gear. He is not returning to the set. He has decided to host a series about amphibians. And a few days later, one of the other women who was camping receives an apple from her step-mother…

EVERYTHING IS LOVELY AND NORMAL UNTIL IT ISN’T

Rivers of London #1 (Deadly Ever After) is thoroughly enjoyable on its own but it is better when you have some knowledge of the world and the other characters. I like the way the characters are portrayed, but there are a few points of confusion. Near the beginning, we see Chris grilling near the river. We don’t see any of the actors we meet later, but we do see the girl in the red hoody. Later, Chris is grilling in the woods with the actors, none of whom we had seen up to this point. For a moment, I thought it was two guys who happened to look very much like each other.

The scene with the mulberry tree is the main introduction to magic in this world. I like that we first see two panels of the same scene, one from Chelsea and Olympia’s perception, and one from Haley’s. Chelsea reaches up to pick nothing from thin air, but as she touches it, a plump mulberry appears as does the tree, with a crackle of blue energy surrounding it. It is a perfect set up for a bit of narration about magic in this world, just enough so a new reader gets a sense of how it acts.

BOTTOM LINE: AN ENGAGING START TO THE STORY

Rivers of London #1 (Deadly Ever After) explores the concept of folk tales having a life of their own that ripples into the present. I love seeing how this mashes up with police procedural as well.

Rivers of London: Deadly Ever After #1

A little magic in the woods, a book of folk tales, what could possibly go wrong?