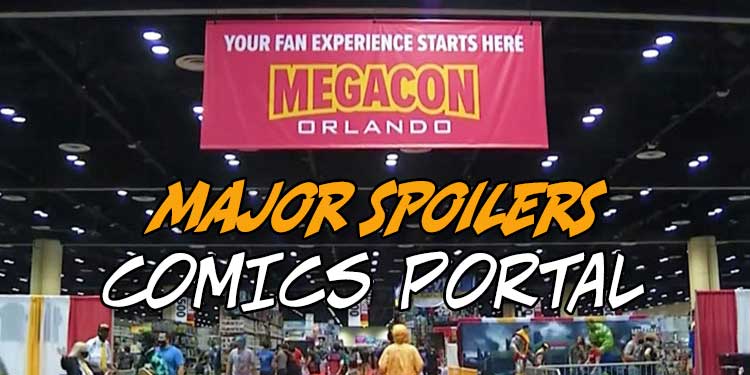 This weekend I attended in person my first comic convention in two years—Megacon in Orlando!

It’s been a while since I’ve discussed conventions (or “cons” to comic fans), so let me talk a little bit about Megacon this year.

Megacon Orlando 2022 is a comic convention in Orlando, Florida, and it was held on May 19-22. This four-day event was at the Orange County Convention Center.

The show has been running for 29 years now. Last year, due to the pandemic, there were 10,000 plus fans in attendance. Given the turnout on Friday, the day I was there, I bet there were many more than that this time!

There were plenty of attractions at Megacon for fans of many genres, including more than 100 comics creators, stars from shows and movies like Lord of the Rings, Star Trek, and Doctor Who, just to name a few. There were also a number of voice actors from anime and other animated shows and movies as well as cosplayers dressed up as many favorite comic characters.

Some fans have met their mates at Megacon while others have actually held their wedding vows during the con!

The convention also wrapped up with an open farewell to George Pérez, the popular comics artist. I was very happy that my roommate and I were there on Friday. Parking was a big concern during the entire convention, but all the available parking was gone early on Saturday morning, making that a singularly tough day to make it to the con. Friday, while the two main parking areas were full, there was one that had spaces available in the afternoon. Busses shuttled people from that parking area to the part of the Convention Center that the con was being held in.

We got there about 1:30 p.m. (after eating lunch outside the con), and we went through several of the areas of interest. That included Artist Alley, which had many local creators of comics and crafts sprinkled throughout.

I have to say how great it was to see creators and other fans in person again! Some wore masks, but some did not. There were no conflicts between those groups, thankfully, so we got to catch up with several long-time friends and also meet new people!

Of course, I’m always looking for new guests for my weekly podcast, and I got to talk with several people I hope will be available for conversations with me soon!

The aisles seemed wider than the last time I attended two years ago. That made it easier to navigate and get to where you wanted to go.

My roommate came across a booth in which they were selling many CGC versions of comics, and he found a Metal Men that was graded at 9.5 and sold for only $50! He bought it right away!

The booth that stunned me the most was the Whatnot area in one corner of the convention floor. If you’re not familiar with that relatively new online auction site, I would highly recommend you check them out. They had a large area that included creators signing comics, neon signs that made great backgrounds for selfies, and even sold Whatnot-brand soda! I expect them to continue to grow in influence and to be a place where comics creators can add

We left about 6:15 p.m. or so to have dinner with friends. Honestly, the two of us were glad we had made it on that day and during that time because we had accomplished more than what we had set out to do!

Megacon once again was an outstanding show! If you can go next year, I would highly recommend it! There have been several other cons going on already in 2022, but this weekend featured other conventions in other parts of the U.S. A big one to me was S.P.A.C.E., the Small Press & Alternative Comics Expo in Ohio. I got to attend that event a few years back, and it’s great to see them back in action!

There was also another Florida convention this past weekend, and that was Florida Supercon, which is held in Miami-Ft. Lauderdale.

In California, you could have attended Comic Con Revolution Ontario (California). In North Carolina, there was WNC Asheville Comic Con, which was held in Fletcher, NC.

From what I hear, the attendance at all these events was significant, with many comics creators and other “talents” there for fans to interact with. There are a great many more cons coming in 2022, more than I could ever mention here! However, some of the highlights include Awesome Con in Washington, DC, from Jnne 3 to 5, Heroes Convention in Charlotte, NC, from June 24-26, Comicpalooza in Houston, TX, July 15-17, Dragon Con in Atlanta, GA, September 1 to 5, and the two BIG ones—San Diego Comic Con from July 20-24 and New York Comic Con from October 6-9.

Of course, be sure to follow the safety procedures that will keep you and your family and friends from experiencing COVID-19 and its many variations!

I do have to say how wonderful it was to once again be out among fans and interacting with creators and other fans at Megacon! I hope next year will be just as terrific!

What do you think? Are there conventions you are hoping to attend this year? What creators would you like to see in 2022? Regardless of your opinion, please be sure to share your thoughts below!