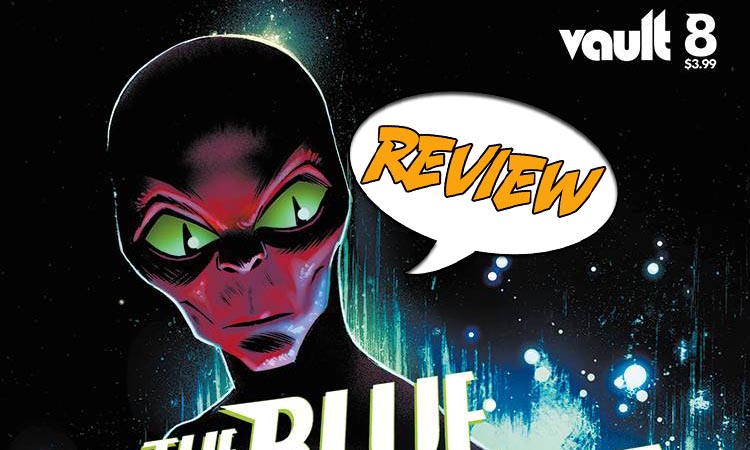 At his cosmic trial, The Blue Flame searches for a power beyond the Consensus. Does such a thing exist, or is Sam losing his grip on reality entirely? Find out in The Blue Flame #8 from Vault Comics.

Previously in The Blue Flame: Yarix serves as the Council working against The Blue Flame at his trial, but he admits he wants to lose so that other civilizations will not be destroyed as his was. But he wants a way to lose legitimately. Yarix’s role is not an award; it is a continual punishment for him to watch civilizations be annihilated. On Earth, Madison takes Dee to see Mateo. She also wants to do something to get him released. The police pick up Sam for his assault on the guy who turned Mateo in. Dee pays his bail but cannot deal with him any longer and insists that he leave. No matter where he is, his life is falling apart. He wonders if there is something out there like a god, something that could overrule even the Consensus.

The Blue Flame #8 opens as Sam concludes that there is no center of creation, but there is a cosmic horizon. Perhaps what he seeks lies beyond the edge of the universe.

On Earth, Dee is concerned that Sam may be delusional. She kicked him out, and now she cannot find him. Madison tries to help Mateo, but has found no helpful options, unless Dee wanted to marry him…

Yarix pleads with the Consensus to stay the trial while Sam searches for whatever he is looking for. They find that The Blue Flame has abdicated his responsibility and find Earth to be guilty of all charges. Yarix argues further, and the Consensus allows his two standard days to find The Blue Flame and bring him back. I think we must allow for some handwaving over time for the sake of the story. Yarix goes racing after Sam and documenting his thoughts and justifications for Sam’s actions.

Sam is getting a meal at a church shelter. A man there talks to them about asking for and accepting help, putting it in terms of religion. It is Easter. The man Sam sits next to has an interesting take on it. He says that Jesus did not have to rise from the dead in order for his story to be true. Faith is belief in the absence of proof. And The Blue Flame crosses the cosmichorizon.

Dee discovers she has a partial placental abruption and she needs to be on bed rest for the sake of her baby. She was counting on working because she needs the pay. Madison finally finds Sam and asks him to come back for Dee’s sake. He says he needs to fix some things first. He won’t come with her, but he says he will be there soon.

Sam at the edge of the universe thinks he may have found something. Sam on Earth goes to Dee’s place of work and offers to fill in for her. They don’t need to pay him, he says. They should keep paying her. He will do the work for free. Her boss agrees as long as he doesn’t do any Blue Flame stuff on the job. As he gets ready for work, in his head he hears his own voice and Yarix as well. Yarix has caught up with him and is trying to save him and bring him home.

AT THE EDGE OF THE UNIVERSE

The art of The Blue Flame #8 has some stunning visuals of Sam’s journey. He travels at impossible speeds so his experience of the universe is almost impressionistic. Crossing over the cosmic horizon is portrayed as a stark contrast between utter darkness and light bright enough to hurt. When he crosses over, mainly we see brightness, with there are some indications that it is not uniform, that there is something there. It is so grand that when Sam finally sees something manifest, it appears oddly out of place.

The grandeur of this very spiritual journey is echoed by Sam’s thoughts and experiences back on Earth in a way. On Earth, this is all in his head. His real life is bleak and difficult. He does not have options. He has been burning his bridges behind him. The people who are there to help him keep coming close to giving up on him. The gulf between him as a person and him as a hero has never seemed so vast.

The Blue Flame #8 is an odd mix of cosmic, spiritual, and gritty. Sam’s timelines diverge so much that it is challenging to keep them in perspective. But beneath it all, there are some interesting thoughts presented to us.