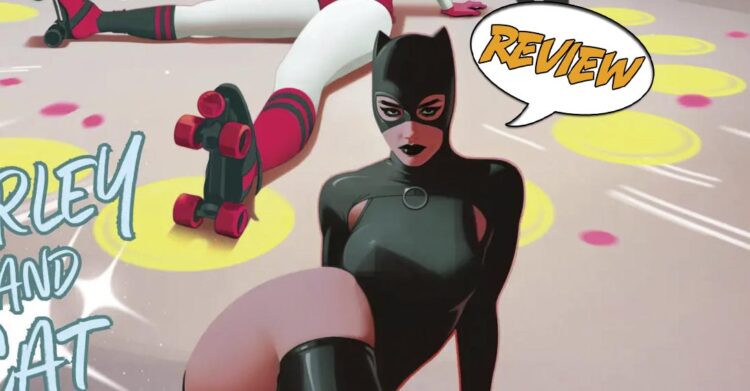 Selina and Harley have hit the road for some much needed rest and relaxation. But it seems like someone wants to crash the party. Your Major Spoilers review of Catwoman #43, awaits!

Previously in Catwoman: Selina has had a stressful time since she has blown up Black Mask’s mask as he tries to retaliate. On top of that, Batman is back in Gotham so she decides to call her friend Harley Quinn to get out of town for a bit.

Catwoman #43 opens with a member of the Tomasso crime family visiting Black Mask who tells them to kill Catwoman. Elsewhere Selina and Harley are already on the road. They have a quick recap and Harley tells Selina that she wants to go to a roller derby. They then stop at a gas station. While there Selina has a quick run in with a mysterious man. Back on the road, the the two women are attacked by someone in a red car. They manage to escape and make it to the motel they’re staying at. While there, Selina is attacked by the man from the gas station, but she’s able to fight him off. The next day the duo reach the roller derby and manage to find spots on the team, but during their first match, Selina meets the true threat after her.

Catwoman #43 is a comic that establishes a theme very early and goes out of its way to adhere to that, even in moments where it doesn’t make sense. While for the most part, the silly and lighthearted feeling of the banter between Selina and Harley is fun and does a lot to establish what kind of relationship these two have. But there are moments, specifically after being attacked twice, when the way they continue to be irreverent feels out of place. Most of this issue banks on just seeing these two characters in fun situations, without much thought being put into how well these moments flow into each other. This leaves this comic feeling stilted and disconnected from itself. But, that doesn’t stop things from being fun to see. This also seems to be designed to be a jumping on point and in that regard it works. The little recap at the beginning of the issue isn’t overbearing but does a decent job catching the reader up.

Catwoman #43 is a comic book that is dripping with style. Rather than using any sort of traditional background coloring, this issue utilizes bold and garish colors to paint the backgrounds, opting to present a feeling rather than trying to look like something real. Also, all of the onomatopeias in here are an integrated part of the art rather than being an additional thing that is only there to serve a purpose, which gives this issue a little bit of a Roy Lichtenstein feel.

THE BOTTOM LINE: A MOSTLY FINE JUMPING ON POINT

Catwoman #43 isn’t perfect. There’s some issues with how choppy the story plays out and at times the irreverent tone of the book doesn’t help it. But as a jumping on point for the series it’s effective and it has a really interesting art style that makes it enjoyable to look at. 3 out of 5

Catwoman #43 is a decent comic book, especially as a jumping on point. Some weirdness in the pacing can be overlooked due to the fun banter and unique style.