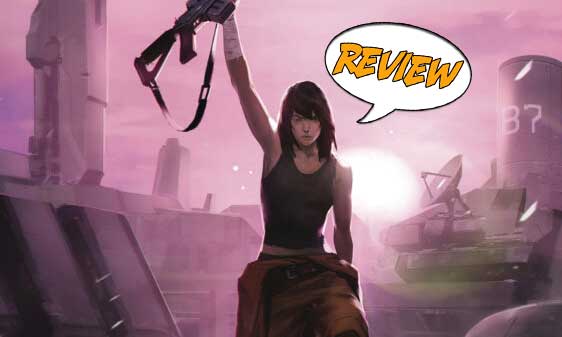 While Lela starts putting together a revolution, Peris meets Governor Lohman. Are his efforts to find the mythical “Lost Suits” becoming a reality, or are they the dream of a fanatic Alphan? Find out in Armorclads #3 from Valiant Entertainment!

Previously in Armorclads: After Sgt. Troy’s death, Peris is singled out and taken away. His Ironclad friends are chained together by the Alphans and marched to the next nearest outpost. As they approach that outpost, it is under attack by Legionnaires, mercenaries looking for Pure, and anything they can scavenge from Armorclads. The Ironclad workers are locked down while their Armorclad Alphan escort attacks. Pulo and Jac work to jam the connection that keeps them locked down. Once they are free, Lela convinces them to help rescue the Ironclad workers from this outpost. Fortunately, Jac helps Lela gain access to an Armorclad suit as they come face to face with the Legionnaires!

FROM OUTPOST TO OUTPOST

As Armorclads #3 opens, Lela and the Ironclads are gathered in the ruins of Outpost 14. She wants to lead a mission to rescue Peris. Jac admits they are just grubs; he thinks this may be beyond them. But with the dome destroyed, the Outpost is no longer a safe place to stay either. Cole thinks that they might be able to cannibalize enough parts from the Alphans’ Armorclads to upgrade their own suits. The handful of surviving Alphans are essentially their prisoners.

Meanwhile, in the city, Governor Dohman, the new Alphan Governor, arrives. He had requested that their doctors look for certain genetic bio-markers among the workers. The doctor asks if this is about the mythical “lost suits.” Dohman simply states that they are not a myth. He enters the lab where Peris is being held. As it happens, he has the best genetic match anyone has found so far. They hear an update about the attack on Outpost 14. Dohman is more concerned about the Pure than he is about his fellow Alphans.

The discussion turns back to the Lost Suits. Dohman talks of them in almost mystic terms – they can change the fortunes of the universe, he claims. And they are the only reason Dohman is here.

Their suit upgrades complete, Lela and her Ironclads prepare to march out along with the remaining civilians and Alphans. She does not want to kill anyone or leave them there to die. She plans to drop them all off at the next nearest outpost. Along the way, they stop to give the unarmored a chance to take a break, and Jac stops to make some adjustments to his suit. Once he is out of his suit, an Alphan takes the opportunity to attack him. But as it turns out, the Alphans are not used to being on Xeru’s surface without their suits. Even though he is much larger than Jac, Jac is quicker and better able to use his strength. As he wins the fight, the group is attacked by bugs. The modified Ironclads, now with weapons, take them down easily.

Peris accuses Dohman of chasing a myth. Dohman has faith that the Lost Suits exist. Peris is skeptical. Dohman claims that ancient dynasties built seven indestructible suits to protect their families and all worlds, which sounds very folkloric, even religious. Peris claims that if this was so, it did not work out very well for Xeru. Dohman insists the families ended up destroying each other. But he believes the people of Xeru could be the key, specifically Peris.

Lela and the others reach Outpost 8. Lela knows one of the workers there and asks for an opportunity to speak to them. She gives a brief revolutionary speech and the Ironclads there agree to follow her.

In Armorclads #3 we get a good look at Lela and her Ironclad compatriots and more than ever, they look as though they are teenagers. We also see that they have been thrown into a lot more than they had ever expected. Until now, their expected life has been to slave away, mining Pure until they die young. Their lives have suddenly become much more complicated. But their lives are already full of desperation. Is it any wonder that, without Alphans around to keep them in line, they agree to follow Lela? I do appreciate that she now has a purpose that has coalesced into a nascent revolution.

Governor Lohman is an interesting character. He is an Alphan, but not as large and muscular as some we have seen. He has some distinctive scars across his face. When we first see him, he comes across as businesslike and dispassionate. It is only as he talks more to Peris that we realize he is a fanatic. He has grandiose plans to make the entire universe a better place. This plainly intrigues Peris. But what does “better” mean in the mind of a fanatic?

I do like that in Armorclads #3, Lela is shaping up to be a leader. I also find the conflict intriguing, seeing as how there are so many parties involved. If anything, this series may have too much plot. I also have some concerns about Peris being set up as a sort of “chosen one” as that is motif that is challenging to do in a novel way.

Lela brings Ironclad workers together for an attempt to rescue Peris.