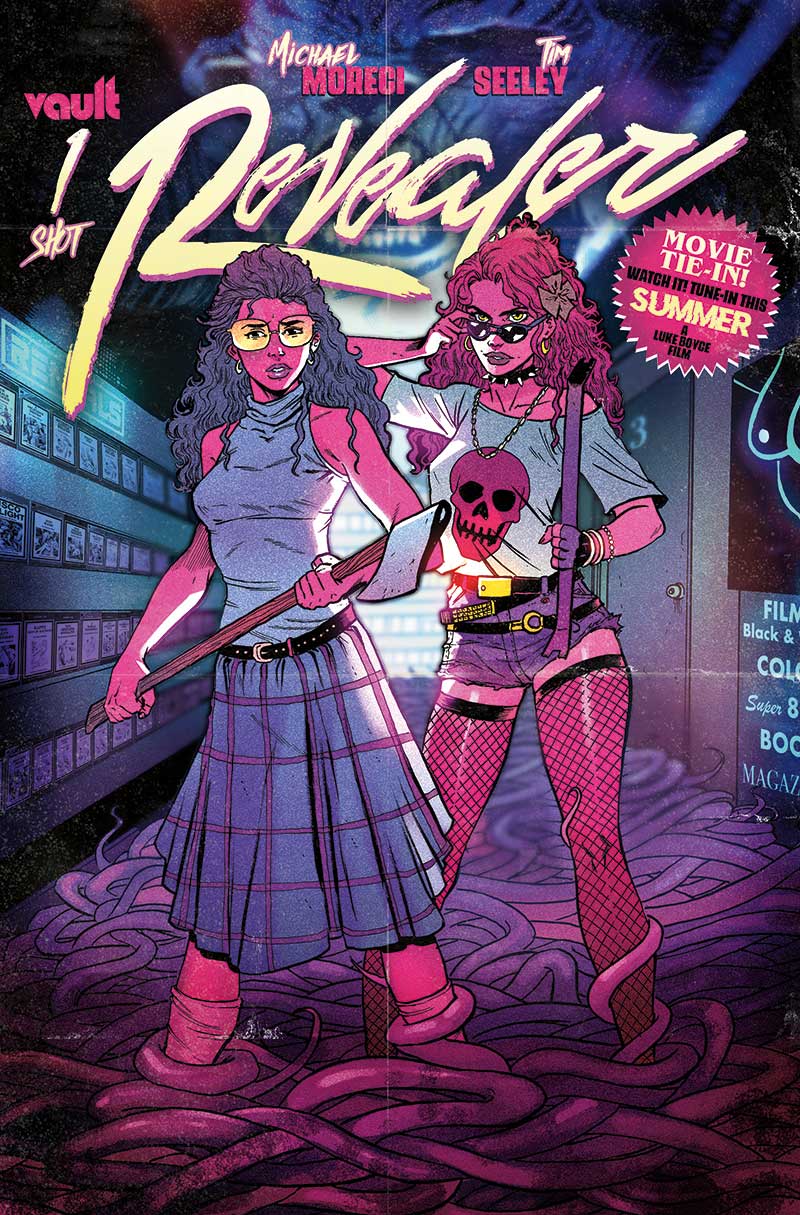 Vault is thrilled to announce that in August 2022 they will publish the phenomenal comic book tie-in to REVEALER, the hotly anticipated Shudder original horror film from Michael Moreci, Tim Seeley, & Luke Boyce. The one-shot will be written by Moreci, Seeley, Boyce, and Aaron Koontz, with art by Dean Kotz, and more creators who will be announced soon. All net proceeds from the REVEALER comic will be donated to Brave Space Alliance, the first Black-led, trans-led LGBTQ+ Center located on the South Side of Chicago, IL.

REVEALER is set during the height of Satanic Panic in 1980s Chicago. Angie Pitarelli just wants to make some extra cash dancing in her peep show booth at the Revealers Adult Bookstore. Sally Mewbourne wants to save Angie’s soul by leading a protest outside her workplace. When the sky turns red and terror starts to consume the streets, Angie and Sally end up trapped in Angie’s booth—and, together, have to find a way to survive an apocalypse of biblical, and demonic, proportions. The REVEALER film is a Shudder Original and will be available on their streaming service on Thursday, June 23rd.

“We made a movie! And, of course, being comic book guys, we had to make a comic that ties into that movie,” said Seeley. “Vault is giving us a chance to tell some stories that we couldn’t do in the film, and play in the sandbox created by the great Luke Boyce.”

“I’m thrilled beyond words about all of this,” added Moreci. “Making a movie has been my dream for as long as I can remember. And getting a chance to now marry two of my loves–movies and comics–is so cool. We’ve got so many great stories to tell in the REVEALER universe, and along with director Luke Boyce and a few others, we’re going to put out a comic we’re very excited about.”

The Revealer comic book will hit store shelves on August 31st, 2022. The full synopsis can be read below:

Spinning out of this summer’s hit indie horror film REVEALER, these four stories tie directly into the movie! Learn more about the characters, the lore, the Revealers adult bookstore, and what awaits on the other side of the biblical apocalypse.

Revealer was produced by Shatterglass Films and The Line Film Co. along with a number of genre mainstays including Sarah Sharp, Robert Patrick Sternand Brett Hays. Sharp and Stern recently collaborated on Arrow Videos’ THE STYLIST. Hays was also a producer on the SXSW hit BROADCAST SIGNAL INTRUSION as well as the A24 horror comedy SLICE.

Brave Space Alliance is the first Black-led, trans-led LGBTQ+ Center located on the South Side of Chicago, dedicated to creating and providing affirming, culturally competent, for-us by-us resources, programming, and services for LGBTQ+ individuals on the South and West sides of the city. We strive to empower, embolden, and educate each other through mutual aid, knowledge-sharing, and the creation of community-sourced resources as we build toward the liberation of all oppressed peoples.

Creating science fiction, fantasy, and horror requires confronting the new, the bizarre, the unimagined. In these genres, creators can break the established order, dissolve conceptions of social identity, and give voices to the silenced. They can ask hard questions, and if they are brave, venture bold answers.

Beyond the page, Vault actively develops its library across a wide range of media, including film, television, audio productions, and video games.